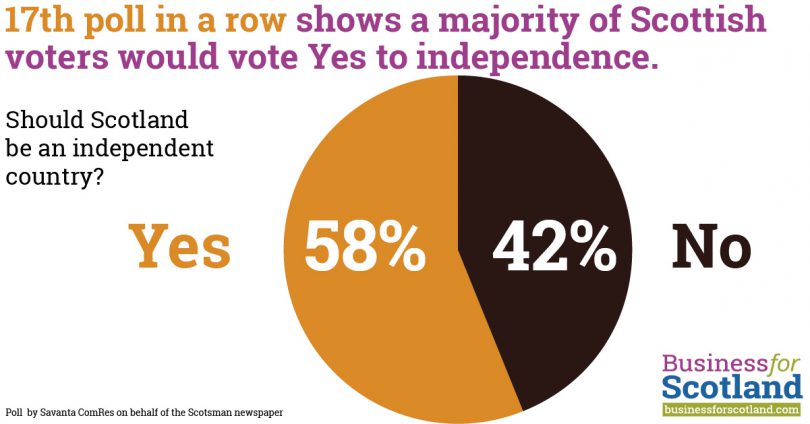 A new poll published today (Dec 17th) has found 58% of Scottish voters now support independence. This is the 17th poll in a row which shows a majority for Scotland becoming an independent nation. This poll also equals the record high of 58% found by STV and so the trend indicates the 52% poll earlier in the week was in fact the rogue poll and not the 58% found by STV poll last month. Including the “don’t knows” the poll shows Yes on 52% and No on 38%.

The poll by Savanta ComRes, commissioned by unionist leaning Scotsman newspaper The Scotsman, also found that the SNP could win every constituency seat apart from one. Voting intentions show the SNP set to gain eight seats – taking them to 71 – while the Tories and Labour are on track to lose eight and five seats respectively. The Scottish Greens would gain five seats and remain ahead of the LibDems as the fourth largest party in the Parliament.

That the SNP would command a single party super-majority is important as it sets out conclusively that Scottish Parliament will call for a new independence referendum in2021 with a mandate that cannot be disputed, as it matches the 2011 SNP majority that led to the 2014 referendum.

NOTE: ComRes polled 1,013 Scottish adults aged 16 or over online between the dates of December 11 and 15.