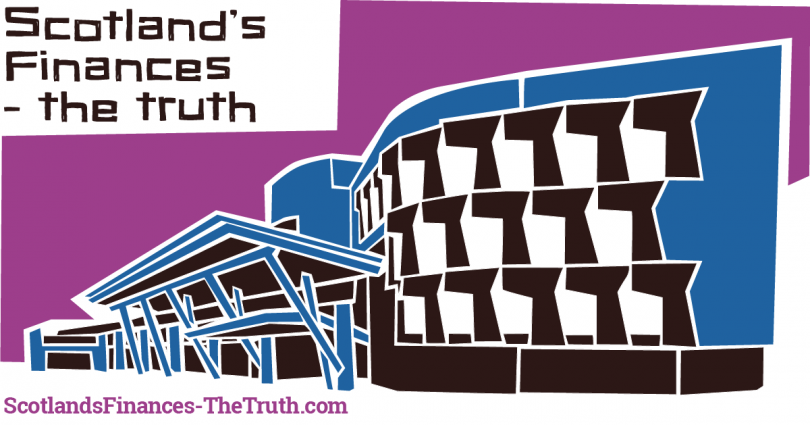 Why does a nation with more natural wealth and economic resources per head than any other European nation, that is both an oil-rich nation and possesses a strong and highly resilient onshore economy, booming exports, a highly educated population, low unemployment and a wide range of strong key economic sectors have a set of accounts that suggest that Scotland’s finances are weak?

That is a trick question – it doesn’t. There is no set of accounts that tells us how an independent Scotland’s economy would fare, nor what its finances would look like. Not yet anyway. Business for Scotland has been calling on the Scottish Government to produce such a set of accounts both in regular meetings with Ministers and in our breakthrough economics book, Scotland the Brief.

The fact that GERS is a set of accounts for Scotland as a region of the UK, and not a separate nation, impacts on how the GERS figures are compiled. This is important to know for three key reasons:

Even with these issues having a drag effect on the Scottish economy, GERS has shown that for 38 years in a row Scotland had higher GDP per head and a lower illustrative deficit as a percentage of GDP.361 The last four years, where the GERS illustrative deficit has been higher than the UK’s, relate to the UK Government’s decision to lower taxes on oil extraction and thus lower Scottish revenues.

So, if Scotland’s economy performs better than the UK’s on average but GERS shows a deficit, GERS must contain clear evidence of mechanisms for removing wealth from Scotland’s accounts to create a phoney deficit.

There are four major ways in which wealth is removed from Scotland and its public spending restricted. They are covered in the following articles. Click on the images below to investigate. 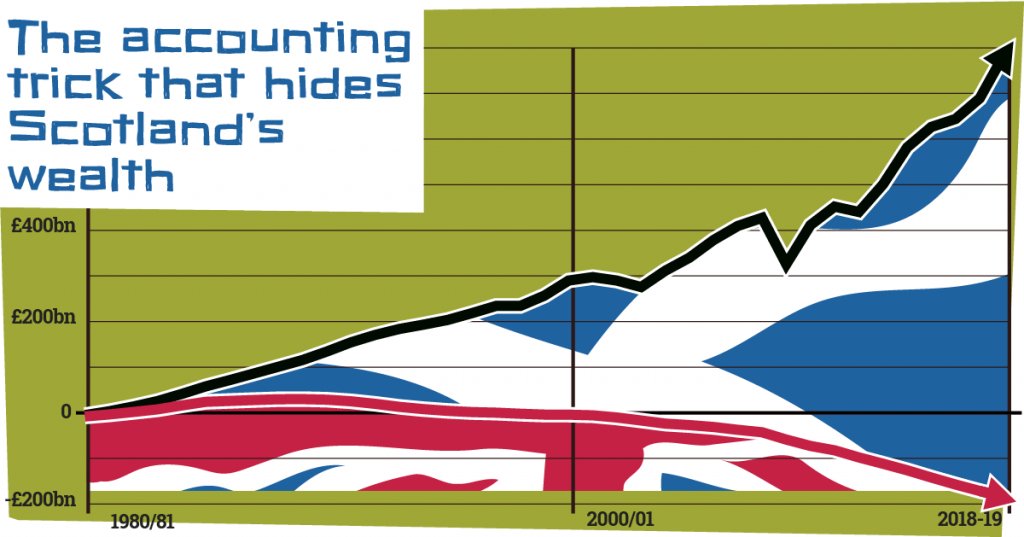 Every Westminster Government in your lifetime has knowingly diverted tens of billions of pounds of Scottish revenues to Westminster. This has led to lower investment in Scotland, higher unemployment, lower economic growth, lower standards of living, economic migration and growing inequality and poverty. All of which would not have been the case if Scotland was an independent country. Read More 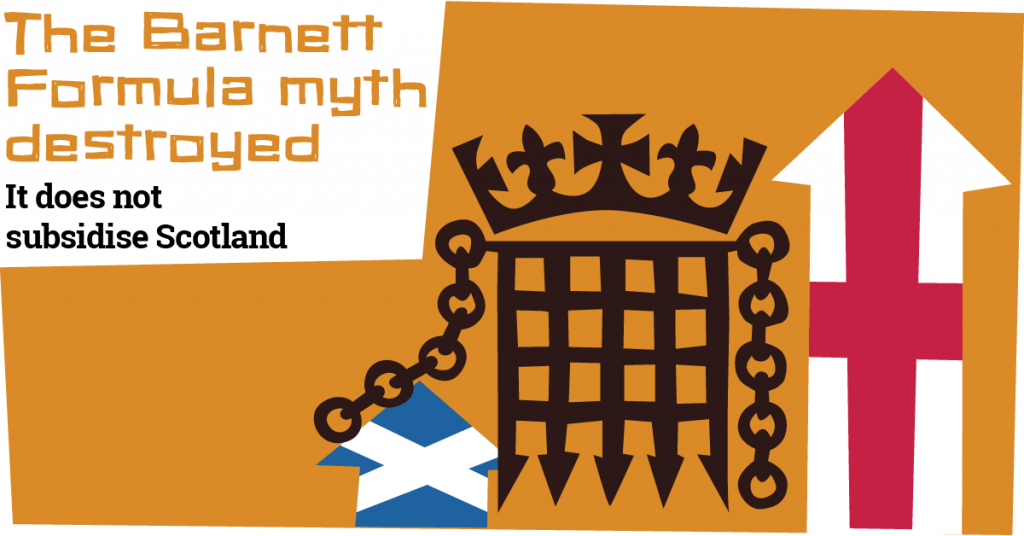 The Barnett Formula means that in the budget areas where it applies, spending in Scotland is reduced on a percentage basis in comparison to the increases received in England. It is a mathematical formula devised to cut Scottish spending – Westminster has been lying to you this whole time.  Read More 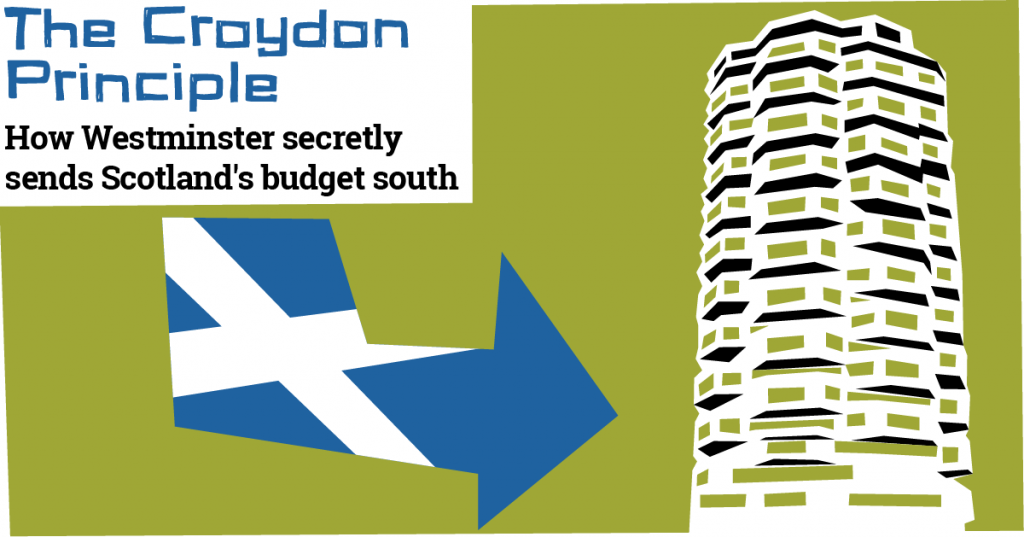 There is a little known Westminster spending policy that places a charge on Scotland’s public sector accounts, but the economic benefit of it is felt outside of Scotland. In short, Scotland does not benefit from all of the spending that the UK Government claims it spends on Scotland’s behalf.  We call this policy ‘The Croydon Principle.  Read More 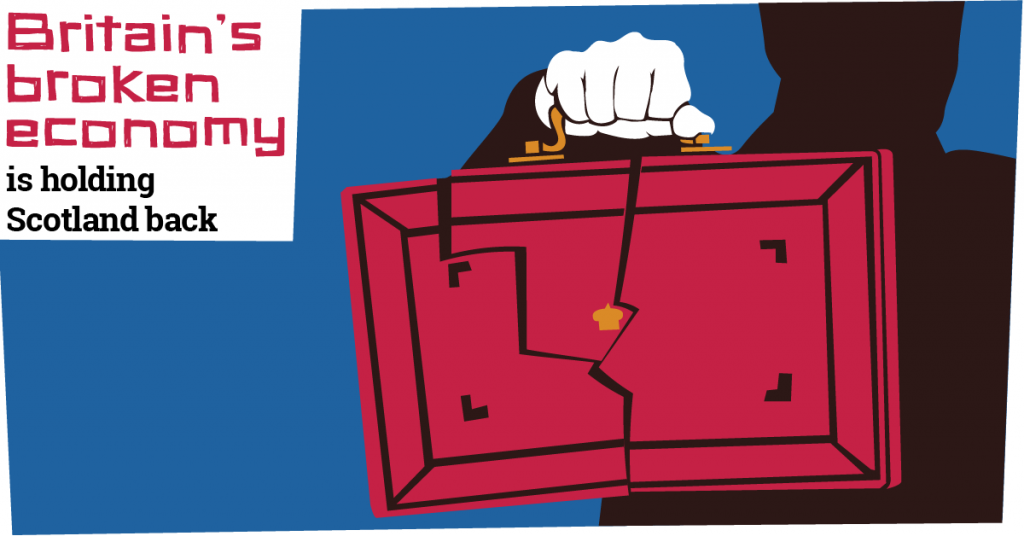 The myth that the powerful and large UK economy somehow protects Scotland is still maintained by Unionist politicians and in the mainstream media. The stark truth is that the UK economy is not strong enough to withstand the pressures of Brexit or any global economic slowdown without serious repercussions for society including significant spending cuts on essential services. Read More 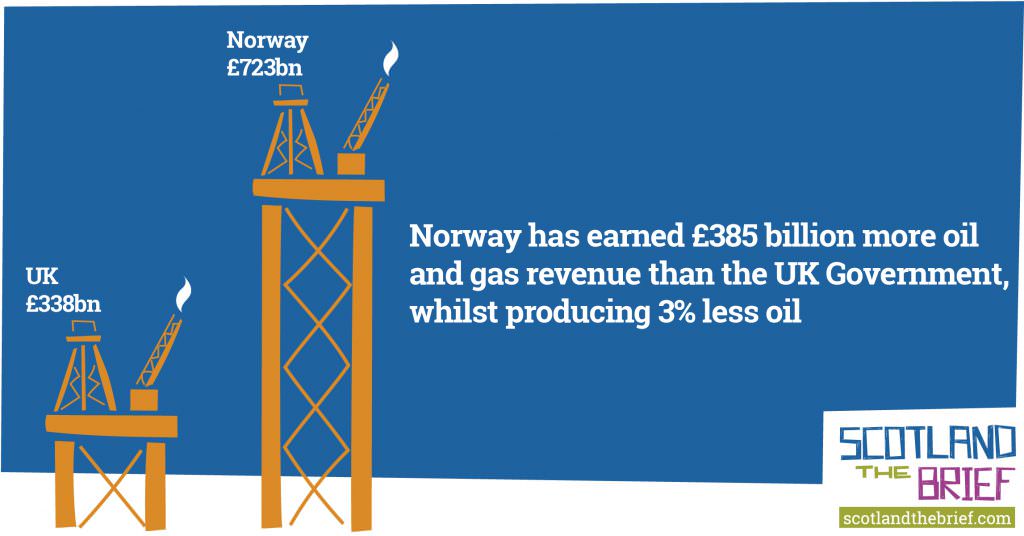 Comparing the UK and Norway’s oil and gas production, and their revenues generated from this industry, we can see that Norway (a smaller independent northern European nation) has generated £386bn more than the UK Government in tax revenues since the production of oil and gas began. Read More

Congratulations if you have read all of the Scotland’s Finances – The Truth series. I think you will agree the truth makes much more sense than the fiction we are force-fed by unionist politicians and the media.

If you are looking for a short cut, then this summary will help you grasp the big picture – which is (unapologetically) that you have been lied to your whole life.

In the 1970s, Scottish oil revenues stopped the UK from going bust and requiring a bailout, but they were not enough to stop the UK debt mountain from growing. Scotland was then allocated a population percentage share of the costs of servicing that debt as well. Despite this double bailout of the UK, Scotland’s economy and its finances still managed to show a higher GDP per head and lower illustrative deficits than the UK until 2015. At that point, the UK’s mishandling of Scotland’s oil and gas wealth caught up with it and it decided to slash Scotland’s oil revenues by reducing the tax on oil extraction, which finally made Scotland’s finances look worse than the rest of the UK’s.

But it’s the UK’s deficit, not Scotland’s. If an independent Scotland had done the daftest thing it could have done with its historical surpluses, then as a nation, Scotland would be £508bn richer than GERS suggests it is, as part of the UK. If it had simply copied Norway, Scotland would have £547.5bn in a Scottish wealth fund right now.

It’s fair to say that in 2014 many people just didn’t believe Business for Scotland when we explained that Westminster was completely economically incompetent, that Westminster truly didn’t care about the impact of its policies on Scotland and was deliberately acting against Scotland’s best interests.

Now, however, Brexit is making that thinking mainstream, and slowly but surely, as Brexit unravels, more and more people are beginning to see that Scotland cannot afford to continue subsidising this failing, disinterested and dysfunctional Union. The UK economy is in a fragile state and has not yet recovered from the 2007 financial crash, despite more than a decade of austerity and real terms cuts to public spending on essential services.

The evidence is clear. The UK Government has created a situation where Scotland’s finances show a false deficit, one that is not related to the economic performance of Scotland. Pro-Union politicians and the highly biased mainstream media point to that false deficit and say that it is proof that Scotland can’t afford independence.

This will continue until the SNP Government becomes more assertive, and gets better at explaining that what GERS actually proves, emphatically, is that Scotland’s economy is remarkably resilient and resistant to oil price fluctuations, that it is under-performing due to carrying the weight of generations of Westminster debt, economic incompetence and wrong-headed thinking on its back.

The research findings referred to in this series of articles are contained in our new book. You can purchase your copy of Scotland the Brief here.