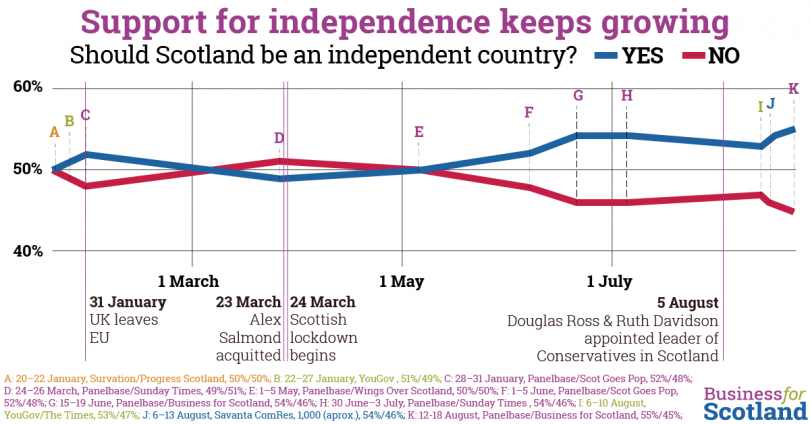 In the wake of the frankly scandalous ‘Trial of Alex Salmond’ presented by Kirsty Wark on BBC Scotland this week, renewed anger at the obvious anti-Scottish independence bias of the BBC has reached fever pitch.

You would expect this from committed supporters of independence but even Unionist newspapers such as the Daily Mail and the Telegraph rounded on the BBC, with the Daily Mail claiming that the BBC could: “These days more honestly have a flagship programme called Brass neck.”

The Telegraphs damming review stated: “The verdict in the Salmond case, by the way, was not guilty…”

“However, it was pretty clear that the programme-makers hoped he would be found guilty.”

Today, a Panelbase poll for Business for Scotland recorded support for independence at 55% to 45% No. This landmark poll reverses the 2014 indyref result and is undeniably news in itself, but it also confirms a trend that can be seen when analysing all polls conducted in 2020.

BBC Scotland has in the past refused to cover polling as a main news story. Any polls are mostly reported on as background after the fact when covering news stories that resulted from the polls, such as Boris Johnson’s ill-advised pseudo state visits to Scotland (which would appear, by this poll, to have had a negative effect for the Union).

The BBC claims it doesn’t report on individual polls in isolation and instead waits for patterns to emerge in polling and report on that instead, in accordance with their guidelines.

However, having largely ignored recent polls that have been demonstrating a sustained rise in support for independence, they cannot ignore this poll and the undeniable pattern that has emerged.

Thus the most recent six polls rounded average is 4% higher than the polls between January and May 2020.

In order to best demonstrate to the BBC that (by their own editorial guidelines) a pattern has emerged, we have compiled this data table listing all the polls using standard questions and including 16-18 years conducted in 2020 by accredited polling companies such as Panelbase, Survation and YouGov.

We have also noted the important political milestones and how they may have impacted on popular support for independence.

This is a landmark poll and demonstrates the momentum towards independence as more and more people are beginning to believe in Scotland.

It also confirmed the trend and if the BBC ignores this as a main news story on top of the blatantly biased Kirsty Wark documentary, then BBC Scotland will be damned as completely biased and untrustworthy in the eyes of the Scottish. 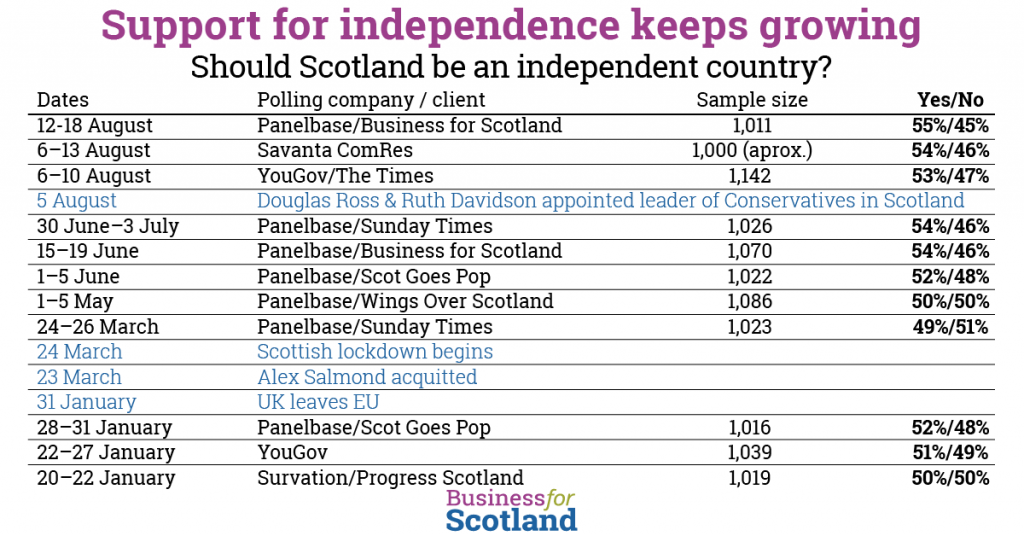 Note: The National has previously pointed out that the BBC has broken its own editorial guidelines on single polls 27 times, they just have not done so when it comes to independence polls.