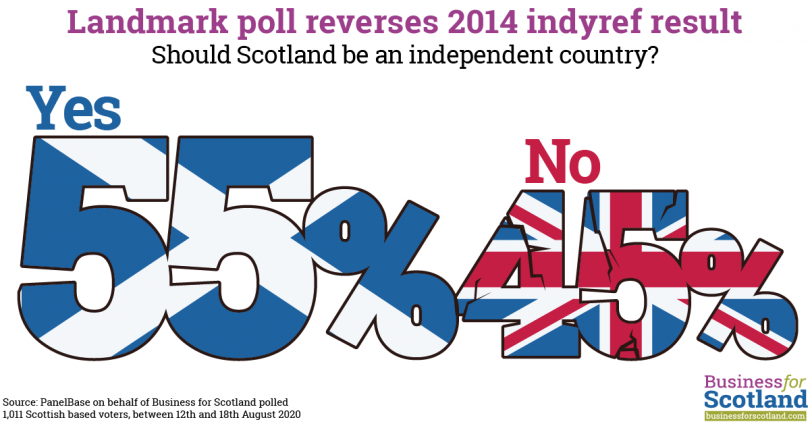 A new poll by Panelbase, commissioned as part of a series of ongoing polls by Business for Scotland, has found support for independence has reached 55%, with No to independence falling to 45%.

This landmark poll shows that public opinion has flipped and the 2014 independence referendum result has been reversed, with Yes surging to a 10% lead.

Gordon MacIntyre-Kemp, CEO of Business for Scotland and the grass roots independence campaign Believe in Scotland, welcomed the poll result and said:

“The reversal of the 2014 result is a huge landmark; 55% Yes will send shockwaves throughout the political world. There is no conclusion to draw from this new set of data other than the writing is very definitely on the wall for the union.”

MacIntyre-Kemp added: “Our June poll found independence support at 54%. That poll changed the dynamic of the constitutional conversation and led to claims of panic in the Westminster cabinet, with a series of high profile Tory visits to Scotland. We also saw the effective firing of the Conservative leader in Scotland and the Westminster Government doubling down on its undemocratic threat to deny referendum after an SNP majority. However, none of that frenetic activity seems to have helped the union, if anything it has made things worse.

“This poll is important when you consider that Yes Campaign started at 27% and grew to 45% support over the period of the campaign.

“The referendum that will be demanded following May 2021 Holyrood elections, on these figures, would start with Yes to independence commanding a 10% lead. Independence is now significantly the majority decision of the people of Scotland and its momentum looks solid.”

A combination of events (below) has created what looks like an unstoppable momentum for Yes support and more and more people are coming to Believe in Scotland.

*We have excluded one poll that asked a non-standard question and did not include 16-18 years olds.

This Panelbase poll generated 1,011 responses between August 12 and August 18. It asked Scottish based voters over the age of 16 the standard question: Should Scotland be an independent country?

More data will follow in subsequent press releases and articles on the Business for Scotland and Believe in Scotland sites.