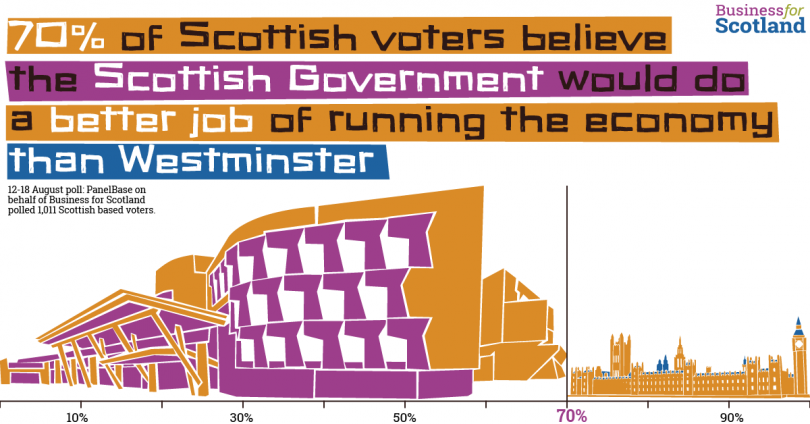 70% of Scots have more confidence in the Scottish Government to manage the economy compared with Westminster, according to a recent poll.

The same survey revealed that 55% of those questioned believe independence will be good for the economy.

The poll by Panelbase for Business for Scotland (BfS) asked the question:  How much do you agree or disagree with the following statement?

“I have more confidence in the economic competence of the Scottish Government in Edinburgh than in the UK Government in Westminster.”

Excluding the don’t knows, 70% had more confidence in the Scottish Government’s ability to run the economy and only 30% chose Boris Johnson’s UK Government.

The poll identified respondents by how they voted in the 2019 General Election and within this poll, 72% of Labour voters agreed that the Scottish Government was more economically competent – and 47% of Lib Dems agreed.  96% of SNP voters agreed but significantly as much as 20% of Conservative voters trusted the Scottish Government more on the economy.

How much do you agree or disagree with the following statement?

“Independence would be good for Scotland’s economy.”

Excluding the don’t knows, 55% thought independence would be good for the Scottish economy. This represents a 10% lead in confidence in the independent economy of Scotland.

We also polled on people attitudes to Brexit and the economy asking:

“How much do you agree or disagree with the following statement? “Brexit will be good for Scotland’s economy”

The question was asked in a positive way to make it comparable to the independence question and, excluding the don’t knows, 68% thought that Brexit would be bad for Scotland’s economy. This included 68% of Labour voters, a massive 89% of Lib Dems, 84% of SNP supporters and even 28% of Conservative voters who rejected the idea that Brexit would be good for the Scottish economy. 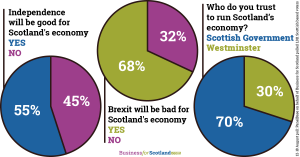 70% would trust the Scottish Government to run Scotland’s economy and that’s a massive indictment of Boris Johnson’s government and the of the economic credentials of British nationalism. That is reflected in the 55% support for independence found in the same poll.

Scotland’s economy is run by Westminster and the Conservative Government’s Brexit omni-shambles with its comparatively poor performance in handling COVID-19, including the threat to end the furlough scheme at the end of October regardless of the needs of business, is driving more and more people to believe in Scotland’s ability to manage its own economy. I am tempted to ask how anyone could possibly think it couldn’t?

Brexit and the economic mismanagement of the Westminster Government are the key factors driving support for Scottish independence. The UK was held together in 2014 by economic scaremongering and the promise that the UK would stay in the EU. Brexit has already disproved one of those unionist promises and is now dismantling the economic case for the UK.

This survey generated 1,011 responses between August 12 and August 18. It polled Scottish based voters over the age of 16.

Data tables available soon and more data will follow in subsequent press releases and articles on the Business for Scotland and Believe in Scotland sites.