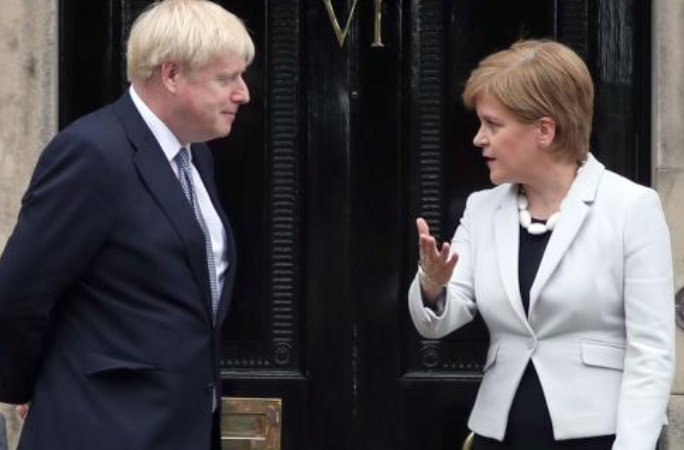 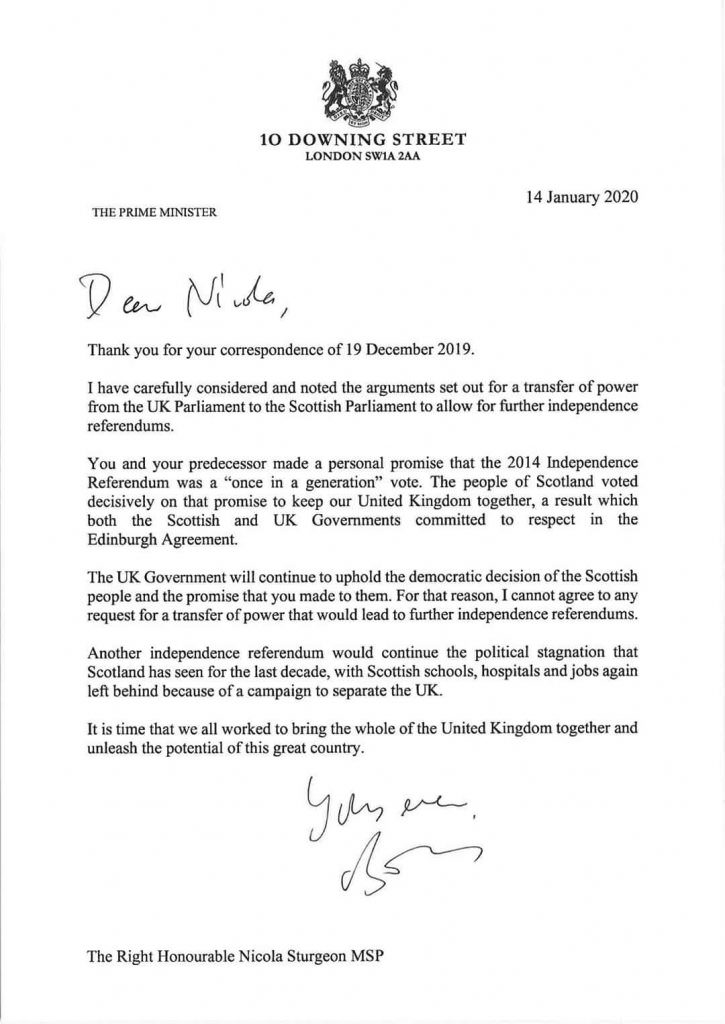 The UK Prime Minister, Boris Johnson, has written to the Scottish First Minister, Nicola Sturgeon, to refuse her demand for Westminster to transfer the power to hold a second independence referendum to the Scottish parliament.  The letter contains (attached) a clear falsehood that Nicola Sturgeon promised that the 2014 referendum would be a once in a lifetime opportunity – she said that she thought it would be, but made no such promise.  That type of bluster and falsehood may win cheers in Westminster, but it will go down very badly with voters in Scotland.

The Scottish First Minister responded that:  Johnson’s formal refusal of her request for a referendum to be held later this year was “predictable but also unsustainable and self-defeating”, and insisted that “Scotland will have the right to choose”.

Following the 2019 General election result, where the SNP won a super majority of 80% of the Scottish Westminster seats, the Scottish First Minister sought the permanent transfer of the powers to hold a referendum from Westminster to the Scottish Parliament. Her goal is to deliver her mandate to hold a second independence referendum after the UK has left the EU on January 31st 2020. The transfer of powers would mean that the result of a new referendum on Scottish independence would have legal status. Therefore, it would not be a Catalan style referendum, as it would be recognised by the international community as a valid result – that is important.

Calling for a 2020 referendum puts the SNP in a better position to encourage pro-independence voters to support them, and steal independence supporting Labour voters, just at a time when Labour in Scotland are actively discussing supporting a second referendum. Making the request, knowing that the likely result would be a denial of their clear mandate, puts the Conservative Prime Minister on the wrong side of democracy. A clever move, which leaves the unionist cause trying to defend an extreme unionist position of saying No to any independence referendum, despite the nation itself moving in favour of one and recognising the democratic mandate won by the SNP.

The SNP message is nuanced, however. It is not based on a full-on clarion call of “let’s be independent”, but rather, on Scotland’s “right to choose”, which is more widely accepted and harder to argue against. This is designed to play well with undecided voters, especially those that do not like the idea of leaving the EU with the rest of the UK. Can Nicola Sturgeon deliver a 2020 independence referendum as she is claiming? Well, the answer to that is still maybe. However, it has always been doubtful and a legal challenge is now almost inevitable.

So what are the Scottish First Minister’s options?

There are two big clues to this. Firstly, in the SNP manifesto which states: “In order to put a referendum beyond legal challenge, we will seek a transfer of power, such as a section 30 order under The Scotland Act”, the keywords are “such as”. If the UK Government says no to a section 30, the SNP will seek alternative legal routes. The FM herself stated that “the matter has “never been tested in court.” 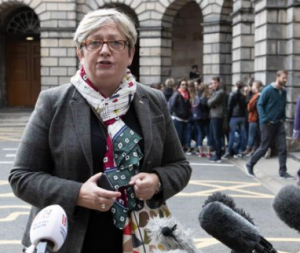 Joanna Cherry MP outside the Court of Session in Edinburgh

We have already reached a point in UK politics where the UK Supreme Court had to overrule the prorogation of the Commons following the SNP’s Joanna Cherry’s (and others) legal action. Therefore, a legal challenge to force the legal status of indyref2 is not unreasonable and would fit with the “such as a section 30 order” statement.

A legal challenge would rest on the status of Scotland as a nation, which is a member of a union of nations, and so, has the right to decide its own future. To state that Scotland does not have the right to self-determination, the UK Government would have to argue that Scotland is not a nation and that Scotland ceased to exist with the Act of Union. This would be unacceptable to most Scots.

If the UK Government goes to court and loses, then Holyrood can hold a legal referendum that would be accepted by the international community. Even if Westminster refused to accept the result, Holyrood would be able to action the result and become legally independent. On the other hand, if the UK Government were to win such a court case, it would also mean, by default, that England ceased to exist with the Act of Union. If the question is “what would drive support for Scottish independence to 80% in both Scotland and England?”, then there is your answer. 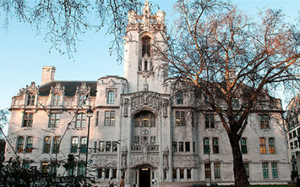 The UK Supreme Court but can it overturn Scots Law? 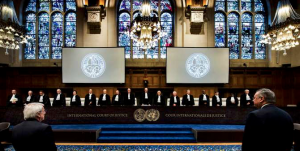 If the Court of Session and the Supreme Court disagree it gets tricky. There is only one court that could possibly have any authority over such a constitutional issue, and that is the International Court of Justice in the Hague. As part of the UN, it would first have to decide if Scotland is a member of the UN by virtue of being a nation-state – a member of a multi-nation state that was a UN member. If it agrees that Scotland is a nation, then it could hear the dispute. However, having agreed Scotland is a nation-state, it would then have to overrule the UK Supreme Court, as Article 1 of the UN charter states that “every peoples have a right to self-determination”.

Now we would get The Claim of Right

The Claim of Right, an Act first passed by the old Parliament of Scotland in 1689, but updated and accepted by both Holyrood and Westminster in recent years.

The claim of Right is a key document, defining of British and Scottish constitutional law. In layman’s terms, it states that Scotland remains a nation and the Scottish people retain their right to choose the best form of government for themselves. On July 4th 2018, the SNP Westminster leader, Ian Blackford MP, used an opposition day motion to put the Claim of Right to a vote in Westminster. Despite a colourful debate, with complaints and interruptions, it was passed by the UK Government, without a division (unanimously). That Westminster vote was non-binding, in that its status did not set a UK legally binding precedent.

So, it has to be tested in the Scottish Court of Session, which I would expect to confirm the claim. It would then need to be appealed to the UK Supreme Court, putting it in an impossible situation. The UK Supreme Court does not have the power to remove Scotland’s nation status. The UK Government would be foolish to make that case as it means England also ceases to exist as a nation or that Scotland is a legal colony of England.

So, essentially we see why Theresa May didn’t say she would say no to a Scottish independence referendum. She knew she couldn’t really, and cleverly said: “Now is not the time”. They cannot defend saying no, but they can defend saying not yet. Boris Johnson has just proven he isn’t as clever as Theresa May and that’s a very scary thought.

Ireland can hold a referendum every seven years.

However, there is a precedent here that limits the ability to eternally say not yet. The Scotland Act (that set up the Scottish parliament), does not mention referendums. It does state, however, that any issue not clearly reserved is, by default, devolved to Holyrood. Therefore, the Scottish Government can hold a referendum, it is just the legal status that is up for grabs. In Ireland and Wales, however, the authority of their parliaments to hold referenda was specifically restricted, indicating the lack of any claim of right in existence among those nations.

However, the Good Friday agreement sets a precedent. It allows for Irish re-unification referenda once every seven years, if all the people of Ireland support one being held. Seven years is the precedent. This is possibly why Labour has realised it is unwise to say no to a second referendum and are pressing the case that a SNP majority in the Scottish Elections in 2021 (seven years after 2014) would trigger a section 30 order.

Labour is aware that the Scottish Parliament’s voting system is designed to stop the SNP gaining a majority, a goal it has only once failed to achieve in the face of 3 SNP victories – the one time the SNP managed an independence majority alone was due to the special set of circumstances that followed indyref1.  Boris Johnson has just handed the SNP a club to beat the unionist parties with and Labour are in disarray. Therefore, a SNP majority in 2021 now becomes far more likely and the manifesto pledge will not be to hold a referendum but to begin negotiations on Scottish independence if a referendum is not forthcoming after the legal battle. Make no mistake the Scottish government have to demand the second referendum, they can’t ask for a new mandate in 2021 without using or attempting to use the last mandate. They also knew that Johnson would say no and in fact, their end game is significantly more achievable because Johnson said no.