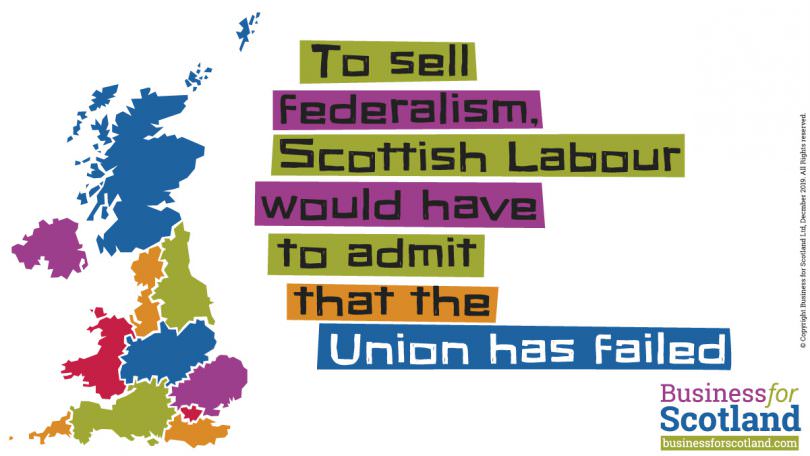 The General Election result in Scotland saw the independence supporting SNP winning 81% of the seats and the Unionist parties, who campaigned to stop a second independence referendum, only managing 19% of the MPs. In the aftermath of this result, Scottish Labour which was all but wiped out is clutching at the straws of federalism – will it save them?

Labour, who secured only one MP in Scotland, have also realised that being on the wrong side of democracy is killing them. As a result, many senior Labour figures now publicly accept that a second independence referendum is inevitable. Most won’t support independence however, so instead, they have dusted down the old federalism option as a radical alternative to independence.

Many independence supporters are worried that federalism will be a dangerous offer in a future referendum, but frankly, that is nonsense. Let’s gloss over the fact that Labour is not in a position to offer Scotland anything. The real issue with federalism is that it is unworkable and that to sell federalism, Labour would first have to argue that the union has failed.

The big problem with the idea of a federal Scotland, as a radical alternative to independence, is that it cannot be implemented without the rest of the UK voting to also become federal. Federalism cannot just be implemented in one part of the UK. It requires a root and branch, UK wide redesign of the systems of government. It is universally accepted that Scotland can vote to become an independent nation following an independence-supporting majority in the Scottish Parliament, as first occurred in 2011, and again in the current parliament. However, the conclusions of a House of Lords report on the constitution stated that “while independence is a matter for the people of Scotland, federalism would have to win a UK-wide referendum.”

If Scotland was to vote for federalism in a Scotland-only referendum, it would mean that Scotland was trying to force a new style of government on the rest of the UK that it didn’t want. It would be akin to a Scotland-only referendum to say that we should abolish the Lords, detach the royal family from public life and have an elected head of state, or that the UK Parliament should move to the Isle of Arran. We simply don’t have the power to force such dramatic decisions on them. Federalism must be voted on in a full UK-wide referendum (according to a House of Lords report) and there is just not enough support in England, where most UK voters live.

It is also unworkable. You can’t federalise power to regional governments in the face of post-Brexit international trade deals.  Federalism is even less compatible with Brexit than devolution, and Boris Johnson would genuinely die in a ditch to prevent it. Therefore, federalism is a non-starter – a red herring argument.

But, what if the UK did v miraculously accept a Federal system? Would it help Scotland?

The problem is that there are several unsolvable flaws with the idea of federalism as an alternative to independence. The first is the powers that federalism would allow Westminster to retain:

2. FOREIGN POLICY: leaving the EU, the single market, and customs union, and agreeing to trade and immigration deals with other nations;

3. WELFARE: setting the pensions rate, universal credits, the bedroom tax, and so on.

So, federalism is not a realistic option. However, it will almost certainly be offered, in an ill-defined way, as an alternative to independence by Scottish Labour in its death throes. The values and political priorities of Scotland and the rest of the UK have been diverging for a generation. Brexit and GE 2019 have broken Britain as a political union, and Scotland should not have Westminster parties limiting its ambitions and international trade. Scotland, and the welfare and well-being of its people, should not be adversely affected in order to remain the closest friends, trading partners, allies, and neighbours to the nations and peoples of the rest of the UK. We can do that whilst deciding our own future as a normal independent nation, rather than a UK sub-state.