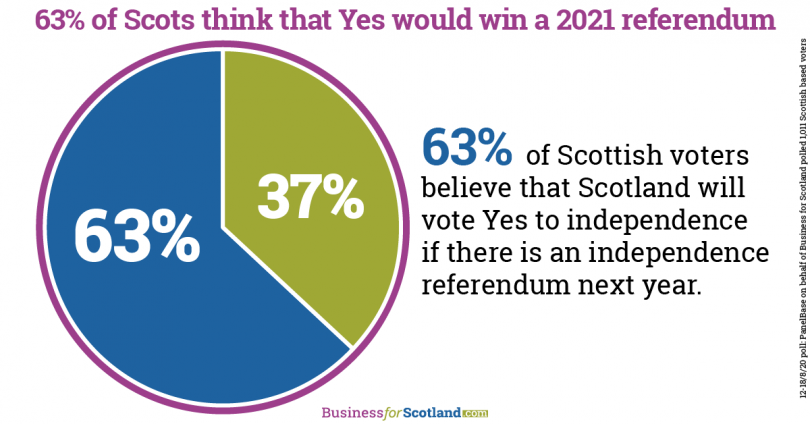 63% of Scottish voters believe Scotland would vote Yes to independence if there is an independence referendum next year.

A poll by Panelbase for Business for Scotland (BfS) asked the question: If there was a referendum on Independence in 2021, what side do you think would win?

Excluding the don’t knows, 63% thought that Scotland would vote Yes.

The poll identified respondents by how they voted in the 2019 General Election and within this poll 62% of Labour voters also thought that Yes would win.

60% believe that the Scottish Parliament has the right to call an independence referendum.

The First Minister has stated that the Scottish Government will introduce legislation to allow for a new referendum. We assume that a Yes majority in the 2021 Scottish elections would therefore lead to an autumn 2021 referendum.  That 63% think that Scotland would vote for independence is significant, given that is 8% more than the 55% who stated they would support independence in the same poll.

What makes this poll so interesting for political analysts is that (including don’t knows) only 29% think the union would prevail in a new independence referendum and only 35% think that an independence majority after Holyrood 2021 did not constitute a democratic mandate to hold such a referendum.

Looking beneath the headline figures, this poll actually suggests that support for the union – and faith that the union will survive such a referendum – has hit rock bottom and is now a minority position.

This survey generated 1,011 responses between August 12 and August 18. It polled Scottish based voters over the age of 16.