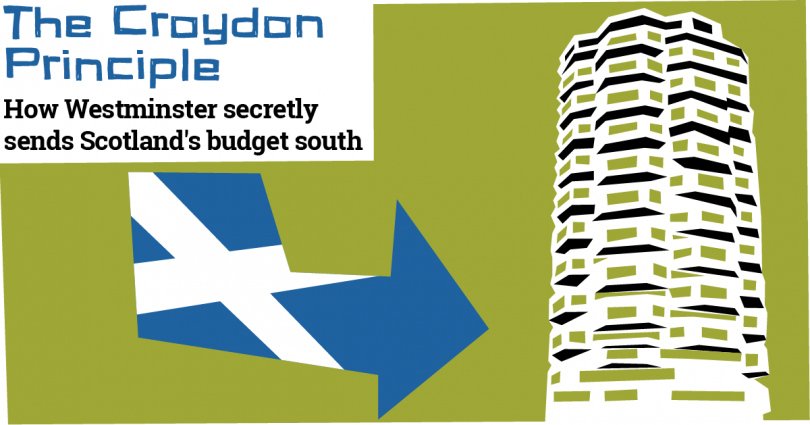 Our previous article in this series explained how Scotland is not subsidised. However, there is another spending principle that also removes wealth from Scotland, which I call the Croydon Principle. This is summed up best by the former UK Prime Minister, Boris Johnson, who said:

For example, the UK Government manages and pays the wages of civil servants who do work on Scotland’s behalf but are not based in Scotland. It also employs civil servants who work in areas not devolved but who are based in Scotland, such as in the Department for Work and Pensions (DWP) and the staff of job centres. In terms of the costs of work done outside Scotland, the Scottish Government has a population percentage share of the salary and related expenditure allocated as a Scottish cost in GERS.

Some people worry about the cost of the new civil servants Scotland would need but most of them work in Scotland for the UK Government already and GERS includes the cost of their wages. Those that don’t live in Scotland however, have their National Insurance and tax contributions applied to the accounts of the regions where they live and not to Scotland, which pays their wages.

There are dozens of examples, but one you will probably be familiar with is the Driver and Vehicle Licensing Agency (DVLA). Located in Swansea, it is one of the largest employers in South Wales, with roughly 6,000 staff, and handles driver and vehicle licensing for the whole of the UK. 447  Assuming that an independent Scotland wanted to set up its own SDVLA, it would need to employ roughly the same number of staff currently working in the Swansea DVLA on Scotland’s behalf.

That would create 498 448 new jobs in Scotland at a median civil servant salary of £28,180 449 or a total salary cost of £14m a year. 450 But that’s not an additional cost to Scotland, which already pays for their wages in its budget.

Taking that median salary and applying current Scottish rates of tax would roughly indicate that in total those civil servants would contribute at least £2.6m in income tax and National Insurance every year to the Scottish Government, a figure that almost doubles when you factor in the additional tax revenues from those employees spending their wages in Scotland.

Then these 498 (now Scottish based) employees would all have to buy cars, food, clothes and houses, which would add roughly £8.3m in purchasing power to Scotland’s economy. 451  That spending would then generate VAT, contribute to economic growth and generate approximately another £1.66m in tax revenue for the Scottish Government. 452

The impact of hiring new civil servants in Scotland would mean the cost remains the same but the Scottish Government gains £4.16m in immediate additional revenues. Sure there would be a transition cost, offices to set up and rent but office costs in Scotland are not that high and are up to 31% cheaper than for those based in London (another saving). 453

To be clear, every time a civil servant working on Scotland’s behalf in the rest of the UK moves to Scotland, the Scottish Government makes a net saving of £15,610. 454

The most common claim in terms of how many additional civil servants Scotland would require to run a fully independent government, is between 24,000 and 25,000. That number, it seems, is driven by the fact that the UK Government employs 24,900 civil servants on Scotland’s behalf. The cost of those civil servants is already added as a cost to GERS, so it doesn’t make sense to assume that there would be any extra cost, as they are already paid for from the Scottish Government’s budget.

It is also the case that many of those civil servants are already based in Scotland, but working for the UK Government in non-devolved departments such as the DWP or the Ministry of Defence. Work done by the London School of Economics identified that in total, 6,640 public sector jobs would need to be created in, or transferred to, Scotland, to support the governance infrastructure of Scotland as an independent nation. 455

That 6,640 new civil servants added to the 42,300 currently working in Scotland (17,400 on devolved areas and 24,900 on non-devolved areas), comes to 48,940, so in effect the Scottish Government may be paying for a couple of thousand civil/public servants it does not need.

We have the inflated expenditure figures but not the corresponding tax and NI income, nor the economic benefits of jobs being based in Scotland, all of which would boost the spending and the taxation revenue side of the accounts.

Thousands of highly paid and skilled jobs that Scotland’s Government pays for are located outside of Scotland. So, the tax and NIC’s, and economic benefits of their wages go to the rest of the UK and not to Scotland. This means that millions of savings as well as additional new Scottish revenues would be gained in the event of independence. The costs of independence are short term and insignificant, whereas the costs of maintaining the union appear to be ongoing and significant.