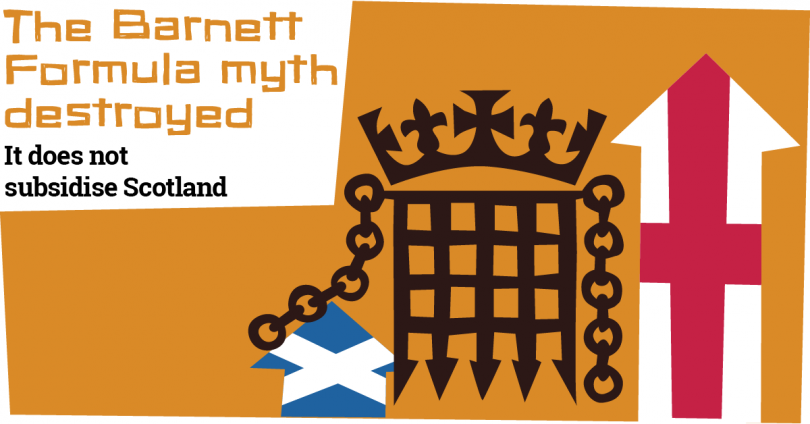 The Barnett Formula was first devised in 1978 as a temporary response to the potential devolution of powers to a Scottish parliament after the 1979 devolution referendum and thus Barnett would replace the annual budget negotiations. The referendum result saw 51.6% of voters in Scotland voting for devolution. However, fearing what would happen, a Labour MP for an English constituency successfully tabled an amendment to the referendum act that stipulated that more than 40% of the total Scottish electorate would have to vote “Yes” in the referendum for devolution to be enacted. Even though the result was 51.6% Yes, the turnout was only 64%, so as a percentage of the total electorate only 32.9% voted Yes, and so despite winning the referendum, devolution was denied to the people of Scotland.

If the Barnett Formula had succeeded and it reduced Scotland’s public sector spending down to parity with England’s, that would just mean that the Scottish surpluses we highlighted in our Accounting Trick article would have been higher than they were. Scotland would therefore have been even better of as an independent nation than in the figures we presented there. The reason that Scottish public spending remains higher to this day is largely due to unforeseen devolution complications and no other reason. That is why many Westminster politicians want to replace it, with a formula that would presumably be more effective at cutting Scotland’s budget.

For example, the UK Government announced plans to increase spending on the NHS by an average of 3.4% in every year for the five year period starting with the 2018-19 and ending with the 2022-23 year. Now obviously, all of these planned budgets went out the window when COVID-19 hit and devasted the health sector, adding billions on to related costs – vaccines, PPE and the hideously expensive and unreliable UK Government track and trace system. However, the planned budget makes for a good case study.

In stark terms, the Barnett Formula, if COVID-19 hadn’t happened, would have withheld from Scotland enough money to have hired approximately 7,955 additional NHS medical professionals, over the five years covered by the spending review. That is not a bonus – it’s a smoke and mirrors mechanism that aims to reduce the Scottish Government’s spending power in real terms.