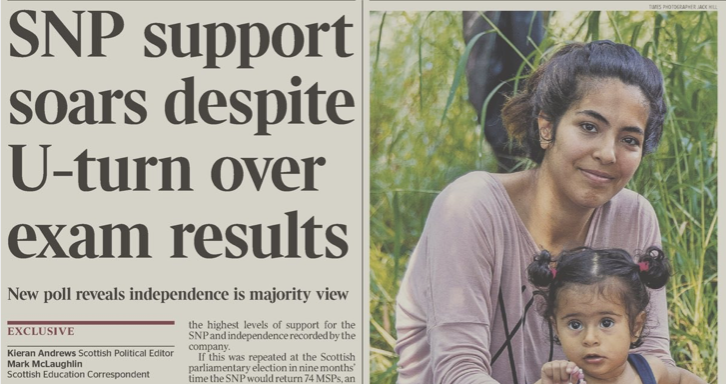 There is a poll out today that is worth mentioning, both on Holyrood voting intentions and independence support but also for its bizarre headline.

The Poll found 57% support for the SNP in the next Holyrood elections and that is more than enough to deliver a thumping single party majority of 20, which provides a repeat of the 2011 majority that led to the 2014 referendum and then some.

Now, the Times poll also found 53% support for independence and this backs up the June and July polls by Panelbase that found Yes at 54%. In other words, the three-poll average comes out at 54%, as you round up.  Rounding is standard practice so the Times could have technically found 53.4%. Now 53% may be down 1% on the last two Panelbase polls (it’s 2% up from the last YouGov poll) and that’s well within the standard 3% margin of error so really means no change. It’s also worth noting that YouGov usually polls lower on indy (not always) than Panelbase, who did both the 54% polls, so the next Panelbase poll will be eagerly awaited.

The mainstream press, unquestionably in the most part, have unionist leanings and haven’t been polling on independence as often recently as you might have expected given the changing political dynamic of COVID-19/Brexit etc. Possibly as they didn’t want the likely bad news? Spotting that lack of polling BfS decided to hire Panelbase ourselves as we felt that independence support was higher than was being reported – our first poll got 54% Yes and our second poll of English based voters found that 49% of them wanted English independence.  Those polls caused panic in the Cabinet and triggered an ill-advised series of UK State Visits to Scotland, which only highlighted that independence was now the choice of the majority.

So why are the Sunday Times and the Times polling now? The Sunday Times hired Panelbase to ask the independence question the week after the BfS poll and may have hoped the same pollster would contradict its own finding within a week? They didn’t and Panelbase got 54% again.

The Times has now conducted a poll in the middle of the SQA exam grades debacle. Again, you have to wonder if they thought they would get lower numbers for the SNP and Yes. They didn’t; 57% SNP is incredible, would lead to a 20 seat majority and 53% Yes simply confirms the Yes majority. Now I might not have written this article were it not for one other thing that The Times did, and that is that they printed a highly misleading headline.

The news story is the remarkable SNP numbers and not the unremarkable Yes number but the headline “SNP support soars despite U-turn over exam results” is misleading.  Was it the case that, unable to get the story they wanted, they created a headline to add some sort of SNP negative to the story?

You see the problem is it’s just not true, as the polling was done before the U-turn. YouGov’s own website states

*Fieldwork took place while the criticism over her handling of exam results was unfolding.

This means that over the 5 days when the polling took place 4.5 of those days were before the Scottish FM apologised on the 10th and said she would announce a response tomorrow (Tuesday 11th). Ipso facto, the poll was conducted almost entirely – and by that, I mean “entirely”  before the U-turn.

The exam debacle was in full swing during the fieldwork and so clearly had no negative impact on the poll results. Therefore it had no place in a headline written by any impartial media outlet.

Why are the polls moving towards Yes?

That’s the secret sauce and it’s going to get spicier as the grassroots movement gets fully back into action in the coming months.

In unprecedented territory the Scottish Government made an error of judgement, it put its hands up and said “fair cop, let’s change it” – the Scottish people will appreciate that and it will help them in the polls.

When the Scottish Government does U-turns, it does them with humility and empathy, when Westminster does them they have to be shamed and forced into action by people like Marcus Rashford. Scotland is already becoming the better nation that independence supporters dream of and that is the cultural change that makes independence inevitable.