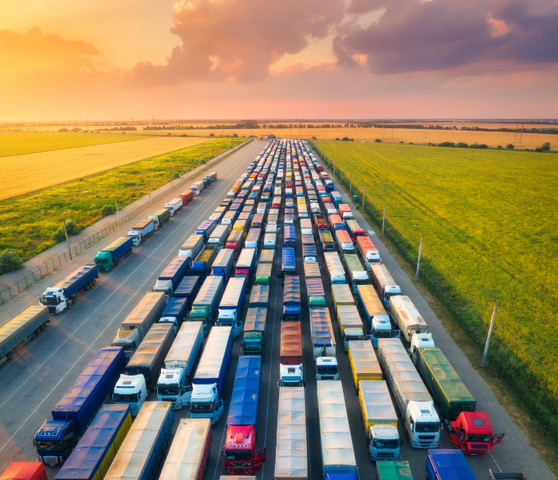 Long queues of lorries formed in Calais yesterday as new Brexit-related import controls which came in on Jan 1, 2022, began to bite. The start of the year is a quiet time for imports and many businesses have also stockpiled expecting some disruption due to the new regulations, so the first issues surfaced a few days into the New Year.

On Thursday, courier “Donny 1975” began tweeting photos of the queue. He wrote: “This is Calais port now – queuing for miles outside the port to get in. Hours waiting now. I hate this shit.” Sharing an image of a car park full of sidelined lorries, he added: “Let me put today into perspective. I was lucky as my paperwork was ok. The ones with no paperwork or incorrect paperwork may have to go back to where they came from to get the correct paperwork. “

Scottish food importer Ian Bailey replied ​​”One of those trucks has our food imports on it. Already chaos and confusion from the haulier with paperwork on his groupage load.” ​​ Later, he reported “A fun morning wrestling with the non-functional chaos that is the GB – EU border. The new system simply does not work.”

Earlier in the week, global logistics boss Jon Swallow reported that one of his HGVs had been sitting at France’s Dunkirk Port for three days as of Wednesday morning due to issues with the Goods Vehicles Movement System (GVMS). Imports from the European Union now need to be processed using the GVMS.

Swallow, who runs global logistics firm Jordon Freight, said it was not simply a case of “user error” because government officials themselves had been unable to explain what’s gone wrong. “The delay isn’t the most frustrating thing. The frustration is that is nobody can tell us what the problem is,” Swallow told PoliticsHome . “We’ve done everything at our end but the problem has been unknown for a day and a half, and that’s hundreds to thousands lo

Bloomberg reported on Tuesday that Japanese automaker Honda is among companies that have seen cargoes hit so far. Steve Cock, director of customs consultancy at The Customs House told the business publication:  “We’ve got a whole bunch of lorries that aren’t clearing because something isn’t working, and it’s not incompetence on our part. It’s going to cheese off a lot of people and have a lot of additional charges for vehicles that aren’t getting to the U.K.”

Bloomberg also quoted Angelos Panayiotou of Windfall Logistics, who has a shipment of Arizona Iced Tea, which retails in Tesco stuck in the EU. Panayiotou said he had generated the correct paperwork for the goods but he gets an error message when he tries to log it on the government’s system. “There’s no-one to go to help,” Panayiotou said in a phone interview. “You’ve just got drivers stuck at port, unable to move.”

The snarl-up at Calais was showing up on Google maps on Thursday afternoon – but in the evening, it appeared that steps were taken to clear the queue.  Writing in the Independent newspaper last week, Ian Dunt predicted: “The UK government will be keen to make sure there are no massive queues of lorries appearing on the evening news. They know the politics of how this works. That image would make them look ridiculous. If it threatened to come true, most customs experts expect them to ease the checks to make sure traffic flows, regardless of the lack of control it would imply. “

Freight-forwarders and logistics firms will bear the brunt of the new checks, which will add significantly to costs. (They have not yet come into force for goods entering the UK from Ireland). During 2021, British importers bringing in goods from Europe could delay the submission of their customs declaration for six months. Now they must submit them at the border.  Some businesses are now also carrying a debt to HMRC relating to those delayed submissions with no idea when it will fall due.

Most goods coming from the EU face a low or no tariff – but that depends on proving that all ingredients originate from Europe. Many goods will soon face phyto and sanitary checks – these have been largely postponed but there are still pre-notifications that now have to be made.  All the paperwork comes together to get what amounts to a visa for the cargo in each lorry – the Goods Vehicle Movement Service (GVMS) and that was what appeared to be suffering glitches at Calais yesterday.

Reuters reported that the biggest effect of the new regulations may be on smaller companies who may find sending small consignments of food or clothes to the UK no longer financially viable. They quote Shane Brennan, head of the Cold Chain Federation whose members move frozen and chilled foods, said the cost of a consignment had increased by about £400. He predicted small European firms may ultimately stop sending to Britain. That is likely to affect Scotland’s many small businesses that import from the EU, from mushroom-growers to Polish supermarkets. It will also add to rising food costs more generally.

The Grocer reported recently that many firms had stockpiled at the end of 2021 in order to avoid disruption. They predict that the new import controls may further damage trade with the EU. They reciprocate checks imposed last year on British goods bound for the EU – “measures that contributed to what the Food & Drink Federation said last month was a 23.7% fall in the UK’s food and drink exports to the bloc since before the pandemic. Imports from the EU fell by 11% over the same period, according to the FDF, which warned the 1 January checks would “further impact the cost and availability of supplies of food and drink from the EU, including essential ingredients and raw materials required by UK manufacturers”.

The issue is likely to prove contentious in Scotland, where only around a third of voters in the 2016 referendum wanted to leave the EU. The Scottish Government subsequently offered to work with the UK Government to secure a compromise similar to Norther Ireland which would allow Scotland to remain in the single market, but that was rejected.