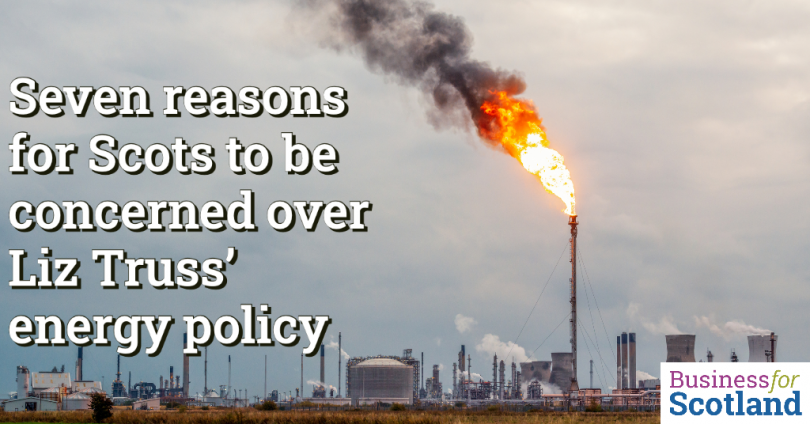 The UK government is expected to announce a  cap on energy bills for businesses today,  but there is likely to be a delay before the details are clear.

What IS becoming clear is the direction of Liz Truss’ general energy policy. Richer households will benefit more than poorer ones from the plans. Businesses have been left to sweat while details of their support package were delayed. The same goes for rural Scots reliant on heating oil – they are also waiting anxiously for details of a fund to help them.

Meanwhile, there is no sign of the government backing for the huge effort needed to insulate homes and boost cheaper renewables – instead Liz Truss’ government is focused on fracking.

In many ways, energy policy is an example of the increasing political divergence between Scotland and England. Living under the political choices of a government that has no electoral mandate in Scotland is another reason to seek independence as soon as possible. Here are seven causes for concern.

1 Delay to help for businesses could be catastrophic for many

Businesses have been struggling with uncertainty for months. Hundreds of thousands of companies reach the end of their fixed-price energy contracts at the start of October. The headlines are being announced today but the package is not likely to be in place until November. The summer was lost to the leadership contest; Westminster is about to enter another three-week recess.

Scotland has a large hospitality sector and many food and farming businesses are already struggling with issues to do with Brexit and Covid recovery. They are being pushed to the brink by soaring energy costs and uncertainty. Analysts at the consultancy Cornwall Insight last month forecast that companies renegotiating in October would face a fivefold increase in their energy costs without government assistance.

The domestic energy price guarantee (EPG) will restrict average household bills in England, Scotland and Wales to no more than £2,500 for two years from October – around £500 higher than they are now, but £1,000 lower than they would have been from next month under Ofgem’s price cap. Many will struggle to pay these very high bills over the winter.

But analysis by the Resolution Foundation think tank, which focuses on raising living standards, said that because higher-income households typically use more energy, the richest fifth may gain an average of about £1,300 this winter compared with £1,100 for the poorest 20%. Around 11% of households with the highest electricity and gas use will gain more than £2,000 from the policy while 13% will gain less than £500.

Much of rural Scotland doesn’t have access to the gas network and many homes are reliant on heating oil. There are 1.6 million homes across the UK use this, mostly in the countryside. They are not covered by the cap, as are people who live in mobile homes or use heating networks.

The energy price guarantee announcement on 8th September, stated that there will be a discretionary fund available for those on heating oil, however, the government are yet to share any further information. Not knowing what help will be available and who will be entitled to the assistance is causing stress for many in this situation.

The average UK household electricity price is already at least 30 percent higher than in many of its European neighbours. The UK government has been too slow to act – and it has done little to reduce underlying problems such as overreliance on natural gas for power generation.

Over the last decade, Conservative governments have reversed or abandoned policies aimed at improving home insulation. They ignored recommendations from the Committee on Climate Change (the government’s official advisers), NGOs, the National Infrastructure Commission and the opposition. The result has been a staggering 85% decline in home insulation installations between 2012 and 2019. Under current plans, it will take 700 years to upgrade Britain’s homes to make them suitable for low-carbon heating.

ScottishPower chief executive Keith Anderson told the Financial Times that the “energy price guarantee” scheme announced on Thursday was “not an end solution” to lower historically high wholesale gas and power prices, which show no sign of abating. Anderson welcomed the intervention but warned the new administration that it had a “huge amount of work” to do to accelerate the construction of renewable energy generation, such as upgrading the country’s electricity infrastructure. He also called for a programme to wean households off their reliance on gas boilers by replacing them with low-carbon heat pumps and improving the insulation of Britain’s housing stock.

There is little sign that the UK government has any interest in setting about this mammoth task – Liz Truss’ mantra on her leadership campaign was that she planned to axe green levies. The Scottish  government is already struggling with real terms cuts to its budget – and it can’t borrow, so it doesn’t have the power to take up the slack.

The new UK government wants to introduce fracking – but that will only increase fossil fuel dependence. It would be far easier to and cheaper to boost onshore wind, solar and hydro. Putting effort into clearing the way for more onshore renewables would be much more effective

Onshore wind and solar have been derailed by planning issues – there has been a moratorium on onshore wind in England and UK charities such as the National Trust have been allowed to block and derail renewable energy, because of an outdated view of what they see as “wild land” – in Scotland, that’s usually land that was cleared for sheep or the nobility’s sporting pleasure.

Polling commissioned by RenewableUK shows overwhelming support for green energy technology, with 76% of respondents in favour of building projects in their local area. Wind turbines don’t damage the environment. In the Great Glen, Stronelairg is part of a peatbog restoration initiaitve and links up with local hydro.  A renewables tourism initiative aims to foster understanding and interest in climate-friendly technology. However, the UK government and UK charities have failed to promote onshore wind – and plans to boost fracking and nuclear are more ideological than practical solutions to the energy crisis.

7 There may be a risk of blackouts this winter

A cold, hard winter raises a real chance of blackouts. That risk rises if a cold spell is spread across Europe, leaving multiple countries scrapping for energy supplies.

Under the government’s “reasonable worst-case scenario”, which includes a spell of cold weather and reduced imports from Norway and France, Britain could face an electricity shortfall totalling a sixth of peak demand for about four days in the depths of winter. Emergency measures would then be needed to conserve gas — which is responsible for 44 per cent of our power generation and heats 80 percent of our homes.

Earlier this month, civil servants carried out Operation Noble Birch, an exercise to test the government’s ability to keep operations running in the first six to eight hours of a national power outage. A second exercise will take place in October before a full-scale dress rehearsal in November. A cabinet office source told the Times that blackouts are extremely unlikely, but added: “We have been planning for the worst case scenario.” This includes ensuring that all schools and hospitals have generators and that they are fueled and ready to use.

Scotland did not elect Liz Truss or her government. Her priorities are not Scotland’s priorities. The likely failures of her goverrnment’s ideologically-driven and unfair energy policy will damage Scotland – but the lessons learned may lead to more widespread support for independence.