Tesco workers receive £98million in benefits due to low pay

When will people tire of subsidising big business because they are not willing to pay their workers enough to live on?  Paying the living wage is not a socialist policy or an act of charitable act it is just good business sense.

Political dogmas are disintegrating, nowhere more so than in Scotland, and people are getting more and more confused as to where they stand. Left and right in Scottish politics are no longer the mutually exclusive clubs they used to be. As I wrote last week, the economic machine works most effectively when left and right operate in perfect harmony and you achieve the right balance. It is time to end our restrictive tribal beliefs in socialism and capitalism and understand that the world that ran on such limited dogmas does not exist anymore – we may as well debate which is better, steamships or sail!

Try to see this months General Election as if it was a football club you supported, giving you the chance to vote for the next manager. Dave rejected all left wing moves and said under his management all attacks would go down the right wing. Ed said no, all attacks must go down the left wing. Nick said don’t pass the ball left or right, all attacks are down the middle. To add even more confusion, you might even have guessed that Dave didn’t care about the fans, that Ed was secretly planning a lot of right wing moves and Nick’s previous time in management resulted in a lot of own goals! You would quickly come to the conclusion that they were all idiots. You would probably want to vote for a candidate who offered all attacking and defensive options and wanted to invest in the team to improve future performance – let’s call that candidate Nicola.

Old style – capitalism died on the same day as socialism but nobody noticed.

The truth is, socialism died when the Berlin wall came down but the faults of capitalism were only held in check by the credible alternative that socialism once offered.  When that credibility was erased, capitalism mutated into consumerism, production became servicing, capital investment became gambling, craftsmanship became assembly and ambition became greed. For a generation our politicians have been peddling rebranded, over-spun iterations of out-of-time economic belief systems.

The key issues of our time are more complex than left and right, devolution is more about libertarianism versus authoritarianism. In the UK, the anti austerity movement is predominantly on the left but the main opposition to austerity in some countries comes from far right parties with disturbing moral compasses. The Living Wage is equally difficult to pigeonhole; you can argue that a fair day’s work for fair day’s pay should be a basic right, and I agree wholeheartedly, but that doesn’t make support for it left wing only.

I also argue for the Living Wage; I see it as a tool for growing the economy, for boosting productivity and, equally importantly, for cutting the demand for and therefore the cost of welfare. There are 414,000 low paid workers in Scotland, that is to say they earn less than the Living Wage (the hourly amount required to exist without going into debt). These people work hard but exist in perpetual poverty and usually have higher personal debt to earnings than their wealthier colleagues, and usually pay a higher rate of interest on that debt as well. That is 414,000 people who work hard but can’t afford to live, and if they are less well off then they are not spending and not paying as much tax and so most qualify for welfare payments due to low wages. Housing benefit, Working Tax Credits, Child Tax Credits and Child Benefit mean that the tax payer is subsiding wages so that businesses don’t have to pay a fair wage.

Across the UK research done by CitizensUK stated that welfare payments made to Tesco’s 209,000 low paid workers amounts to a subsidy of  £93 million, which would be unnecessary if Tesco just paid the Living Wage. I guess Tesco think “every little helps”? To be fair to Tesco the rates they pay staff are the same as most other retailers.

In other words, given that the majority of low paid wages are in major retail, hospitality and care, all sectors dominated by big PLCs, some of the largest and most successful companies of our generation are receiving tax payer funded subsidies to employ people on wages that bind them in poverty whilst excluding them from making positive economic contributions.  By my highly conservative calculations (lacking perfect data) these welfare payments to low paid workers amount to between £800 and £850 million pounds a year from Scotland’s budget alone. The extra Income Tax generated and National Insurance contributions from the increased wages would also generate between £220 to £250 million of additional revenue for Scotland. This means that, even before the economic stimulus effect from higher consumer spending, subsidising the living wage is costing the Scottish budget £1 billion a year. 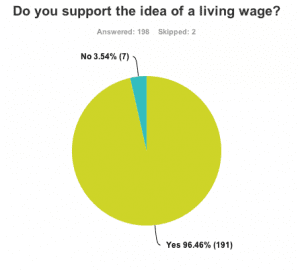 At Business for Scotland we recently surveyed 200 of our employing members and 96% supported paying the Living Wage. Some said they couldn’t, due to the wage levels being set by council contracts, and others because big retail and hospitality competitors could under cut them due to low wages. SMEs, it seems, want to pay the Living Wage and many do, but cost competition from large PLCs is keeping wages down. Not only that, but big retailers’ dominance based on cost cutting has devastated independent retail and left many high streets deserted.

The Scottish Government committed that all directly employed public sector employees are paid the Living Wage. This means that only London and the South East have a lower percentage of the population below the Living Wage, but due to austerity they can’t afford to commit to all contract workers receiving the same. The representatives of big business such as the CBI will claim paying the Living Wage would cost jobs and lower investment (they would say that wouldn’t they?), but the evidence doesn’t stack up. Credit to Barclays and KPMG, two big companies that have committed to the Living Wage and who point out that improved staff retention, lower recruitment and training costs, low absenteeism and higher productivity make paying the Living Wage a zero-sum game.

If you can’t operate profitably without paying poverty wages then your business is not sustainable, surely that isn’t the message some of the UK’s largest retailers want to send to their shareholders? Is topping up wages from the Government purse socialism gone wrong or capitalism gone wrong? Either way, if it’s a zero-sum game for employers, a major boost to employees and worth £1bn a year to the Scottish Government’s balance sheet, then let’s make the Living Wage the minimum wage just as soon as we have the power to do so. It is the fully fiscally responsible thing to do.