Marie Macklin receives her CBE from the Queen

Heartfelt congratulations to Marie Macklin, who was presented with a CBE by Her Majesty The Queen at Holyrood this week.

Marie, CEO of The Klin Group, was recognised in the New Years Honours List  for services to Regeneration & to Entrepreneurship for her work transforming communities by developing brownfield sites for housing across Scotland.

She is a member of the Board of Ayrshire College and Business Patron to Centrestage Music Theatre, the Kilmarnock-based social enterprise arts organisation. In 2013 she received the Association of Scottish Businesswomen’s Award for outstanding contribution to business.

Jamie Wallace with his certificate

Founder Jamie Wallace was awarded Highly Commended for the business he set up just six months ago.

Jamie said: “It is recognition for all the hard work of getting the business to where it is today, including the efforts that went in to working with many of Glasgow’s newest Gaelic businesses that brought about a successful Gaelic Twitter Day on the 30th April; and in doing so, raising Gaelic awareness in the mainstream world of business in Glasgow, particularly among small businesses and social enterprises.”

The Proctor Group receiving their awards

The Proctor Group were double award winners at the recent Family Business of the Year Awards in London.

The family business, founded in 1934, is now run by the fourth generation of the Proctor family. The family originally manufactured textiles and supplied flax to Scotland’s mills which evolved over time to the supply and fabrication of insulation products. The small family business grew to become the business it is today, a nationwide supplier of Thermal & Acoustic Insulation, Timber Cladding and Ground Gas protection products as well as a range of innovative, market leading vapour permeable membranes, all of which are still manufactured in Scotland today.

Keira Proctor, Managing Director of Proctor Group was delighted with the win saying: “We are delighted to have been nominated and win this prestigious Family Business of the Year award. It comes after years of hard work and challenging times within the construction industry, as well as significant changes within the running and diversification of our organisation over recent years.”

Paul Andrews, Founder and Managing Director of the Awards added: “The Proctor Group demonstrate an incredible balance between the old and the new, aware of their heritage but also prepared to move forward to keep pace with the sectors in which they operate.”

You can read more here 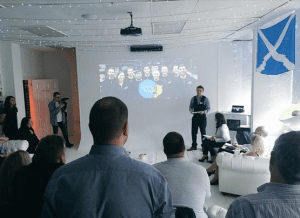 Sharing the business benefits of the Living Wage

Business for Scotland’s Glasgow Group held a networking event this week, focusing on the business benefits of paying the Living Wage. Speakers included local business owners paying at least the Living Wage, who claimed increased loyalty and productivity as a direct result, and representatives from the Scottish Living Wage Organisation.

The case studies were well received, and there was good debate following the presentations. 29Studios, which hosted the event, will create a video which we hope to share with you very soon.

“The real benefits cheats are the employers who are milking the system” – an article by Deborah Orr in the Guardian, backs up what we in Business for Scotland have said many times.

When the taxpayer is taking on so much of the cost of in-work benefit, and the employee getting so much of the blame, there’s really only sheer nerve and hypocrisy left to be admired, says Orr.

BfS founder Gordon MacIntyre-Kemp agrees. He wrote recently: “When will people tire of subsidising big business because they are not willing to pay their workers enough to live on?  Paying the living wage is not a socialist policy or an act of charitable act it is just good business sense.”

The BfS stance is that the Living Wage is a tool for growing the economy, for boosting productivity and, equally importantly, for cutting the demand for and therefore the cost of welfare.  His article highlighted the fact that low pay costs Scottish taxpayers £1billion every year.

Social businesses in Scotland are set to benefit from a half a million pound funding boost by the Life Changes Trust.

£500,000 is being invested by the charity which works to improve the lives of young people who have had experience of the care system, and people affected by dementia.

Ideas are being sought from any social businesses that have creative ideas for new ventures that would impact positively on one or both of these groups.

Each social business can bid for up to £50,000 and will also receive business mentoring support.

The proposed third runway for Heathrow Airport will be “good for Scottish businesses”.

The Scottish Chambers of Commerce (SCC) has welcomed recommendations for a third Heathrow runway, saying it would be good for Scottish business. Glasgow Airport has also backed the the Airports Commission report, which favours expansion at Heathrow over Gatwick.

The Scottish government urged Westminster to now act after “decades of prevarication”.

Sir Howard Davies’s report recommends a third runway at Heathrow, saying it will add £147bn in economic growth and 70,000 jobs by 2050.