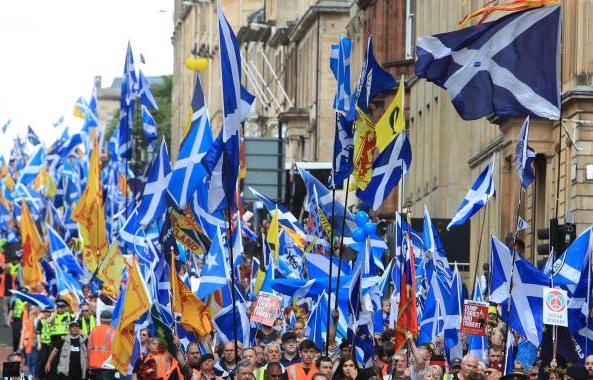 Since the beginning of the year I have been touring Yes groups and the occasional SNP branch meeting doing 20 or so talks, sometimes three a week, ranging from rural Berwickshire to Inverness, and Fort William to Lanark.

The talk called “Act now and deliver independence”, even managed to draw around 60 attendees in small towns such as Brechin and 70 in North Berwick.

What became manifestly clear, in all of these meetings is that momentum in the grassroots independence movement is building – Yes hubs are appearing across Scotland, numbers are growing at marches and at local events, and so is frustration at not having an actual referendum to fight.

My message though is that just because we were told there would be a referendum and were eventually supplied with a date in 2014, it won’t happen that way this time. Essentially the grassroots movement are in the driving seat. The SNP have to concentrate on Brexit, getting a result that is less harmful for Scotland and retaining as many powers as possible.

While they are busy doing the day job, the Yes movement needs to start converting people, emphasising Westminster incompetence, asking how Brexit will work out and relentlessly pushing that positive “Yes we can” message. For if we move into a lead in the polls (SNP ones or mainstream media ones) then Nicola Sturgeon will have the mandate to call a referendum from Scottish and UK election victories, the justification provided by Brexit and most importantly the backing of the people. Once that happens, she will call it.

Only after Brexit will we be able to compare and contrast our plan for independence with the shambolic Brexit. I know this is hard to swallow for all the “let’s go before March so we can stay in the EU” crowd, but that is just not going to happen.

Firstly, there isn’t enough time to get referendum legislation through Holyrood, demand a Section 30 order, wait for Westminster to debate or just ponder that and then say no, all before March. If we were able to do that we would have a referendum that wasn’t binding on Westminster and one that promised we would stay in the EU when actually if the plan is to use sterling unofficially (for a few years at least) then we can’t actually stay in EU. There would be no need to vote before March if EFTA becomes the SNP’s policy (I bet it it will after March).

“Oh but we should have our own currency from day one Gordon”. Yes, yes, so the plan for independence is to trade in a different currency (backed by all of our oil and gas and renewable energy reserves and surplus in international trade) that will harden and rise way above the post-Brexit, sinking English pound?

That means our largest trading partner will not be able to afford to buy anything from us and our food and whisky and oil exports will fall dramatically. We all want our own currency and full monitory powers, but it has to be when it’s best for Scotland, not based on ideology. Launching a Scottish currency immediately after independence is only the answer if the question is “what’s the dumbest thing we could do on currency?”

On the other hand, Sterlingise as the pound sinks and the rest of the UK won’t be able to afford to buy from anyone but Scotland, even if there were border controls (there won’t be).

Another key reason for not going before March is that the key to winning independence is winning over people who tick the following boxes 1) Voted No in 2014 with heavy heart because of fears about the economy 2) Voted to stay in EU because of fears about the economy 3) Are now open to discussion about an independent Scotland in EFTA being more prosperous than the UK outside the EU and single market.

The trouble is that many of those people are still confused about Brexit. They still think it might be cancelled, they think “surely those idiots in Westminster will come to their senses”, and until they are 100% cured of that delusion they will resist ticking box three.

You see, to tick box three they have to accept that they got it completely wrong, that their core beliefs were incorrect. That the Westminster Government they put their trust in just a few years ago is deliberately acting against both Scotland’s best interests and Scotland’s democratically stated wishes and that they just don’t give a damn about us.

That’s a hard pill to swallow, and so they will wait until after Brexit happens and the think tanks spell out the pain of the actual deals, then they will be able to say “I am not leaving Britain, Britain left me”, and they will be right.

Remember that poll last week that put independence at 52% (if the poll is after Brexit)? Why not before? Because wording the question “after Brexit” means people have to accept the reality of Brexit and it then changes how they would vote.

Ask the people who will actually run the campaigns and they generally say the window of opportunity to call a referendum (and demand a section 30) opens after Brexit and the time to hold a referendum will be Autumn 2019 at the earliest, but before the next Holyrood election for sure.