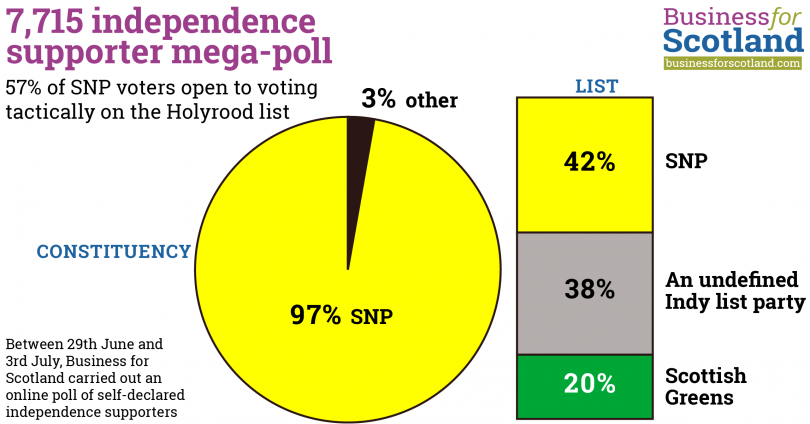 During the 2017 snap election, tactical voting had a significant impact on the result. In my opinion, this was probably the first time in an election in Scotland that tactical voting actually worked. After watching the SNP successfully transition the 2014 referendum 45% Yes vote into SNP votes, and sweep the board in the 2016 Scottish Elections, the unionist parties fought one another for the title of ‘Most British’ – and the Conservatives won.

Stuck in a Better Together mindset, Scottish Labour Leader, Kezia Dugdale, even encouraged Labour voters in certain constituencies to vote Conservative in order to unseat the SNP in 2017. She told Sky News, “The reality is the vast majority of seats across Scotland, it’s only the Labour party that can beat the SNP.” And, “There are a few differences in the Borders and the Highlands where the Tories might be better placed but right across Scotland’s central belt, where the vast majority of Scotland’s population lives, the only party that can beat the SNP is the Labour party.”

The trouble is, as nuanced as she was trying to be, Labour voters in Scotland, with unionism as their main motivating factor, didn’t heed the Borders and Highlands instructions and a lot of them just voted Conservative. The resulting increase of Conservative MPs in Scotland, from 1 to 13, devastated the ranks of leading SNP figures, not least Alex Salmond, Angus Robertson, Tasmina Ahmed Sheik, John Nicolson and Calum McCaig. It’s a cautionary tale, as had the SNP held those 12 seats, Labour and the SNP combined would have had four more seats than the Conservatives and Theresa May would not have been able to command a majority, even with DUP help. Kezia Dugdale probably stopped Jeremy Corbyn becoming Prime Minister and sealed her fate as a politician, whilst creating the myth that Ruth Davidson was more than your usual Scottish Conservative and not just in the right place at the right time. Realising that even the most fervent of unionist Labour voters would not vote tactically for Boris Johnson, Davidson exited stage left, largely to avoid significant defeat in the May 2021 Scottish elections.

It’s important to consider such context, as it’s clear that tactical voting rarely works. When it does, it is difficult to control, there is often a price to be paid by the instigators and your opponent’s voters will react. That reaction for SNP voters will add a fascinating new element to the next Holyrood elections. The Better Together tactical vote in 2017 has opened Pandora’s Box and posed the question: ‘How can independence supporters use tactical voting to fight back?’

The sheer scale of the SNP vote in current polls has led many to believe that the SNP will win almost every constituency first past the post in Scotland, with the notable exceptions of some Borders and Highland seats. Indeed, it’s hard to argue that that will not be the case when looking at the latest poll (Panelbase/Sunday Times) which has the SNP on 55% in Holyrood constituency polling and 50% on the list. The poll suggests that the SNP will gain 11 seats and the Greens will gain 3 seats. That’s 74 and 9 MSPs respectively. The SNP will have that gold standard single-party majority of 9 and then the independence majority increases to 18 when you add the Greens.

For Westminster to refuse such a majority mandate would, at that point, be so manifestly undemocratic that maybe 75% of Scottish voters would agree that the SNP has a right to call a referendum and independence support would pass 60%. In my humble opinion, then, and only then, can the SNP and Greens start to talk about Plan B (a non-Section 30 route to independence) without actually damaging the steady move to Yes by the more conservative, risk averse, undecided, and weak No voters that are now the Yes camp’s target audience.

According to the Panelbase poll, the unionist parties will collectively lose 14 seats (7 each for Labour and the Conservatives). So, why the clamour to create a new list party? Well, many ardent independence supporters see that the SNP 50% on the list ballot can effectively be split in two and would still comfortably beat the Conservatives on the list at 18% and Labour at 15%. Therefore, unionist representation, in theory, can be reduced to a handful. Is that undemocratic? Only if you think 2017’s unionist tactical voting was also undemocratic. Is it fanciful? Well, let’s see what our survey found:

Between Monday, June 29 and Friday, July 3, Business for Scotland carried out an online poll of self-declared independence supporters and our poll generated a massive 7,715 responses. 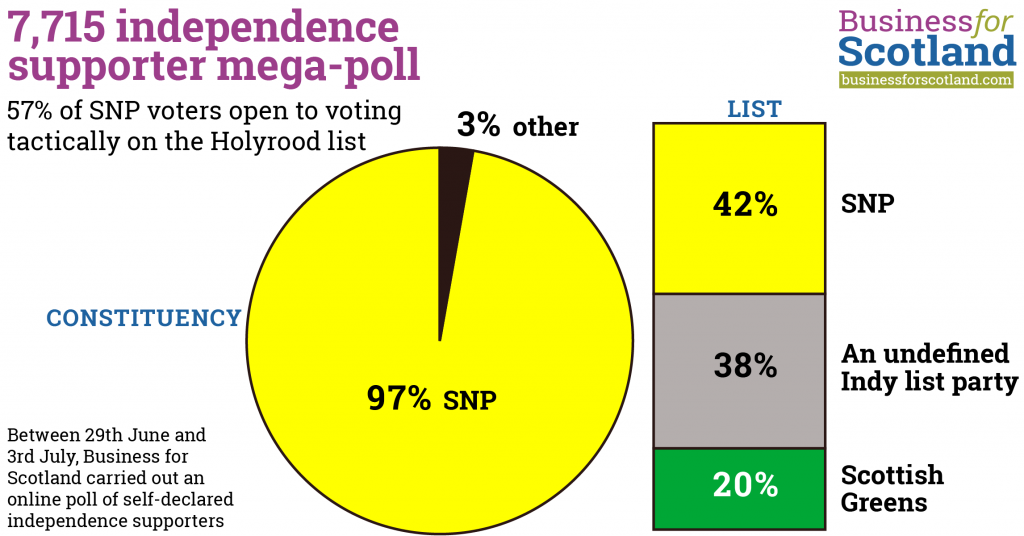 We will run a few projections based on this data, but first a few caveats: 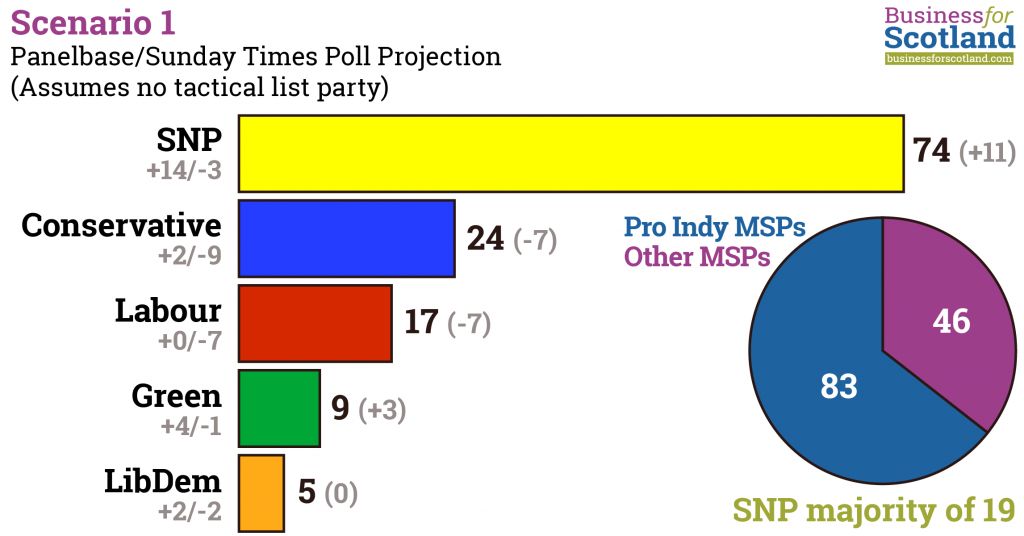 Verdict: This now looks highly unlikely as tactical pro-independence list party idea is gaining traction. Pollsters closer to the election will have to offer a list party option once the situation is clear.

Projection 2 – Assumes that by May 2021 the independence supporting public has caught up with the early adopters and the BfS poll is indicative of the reality of tactical voting in May 2021. 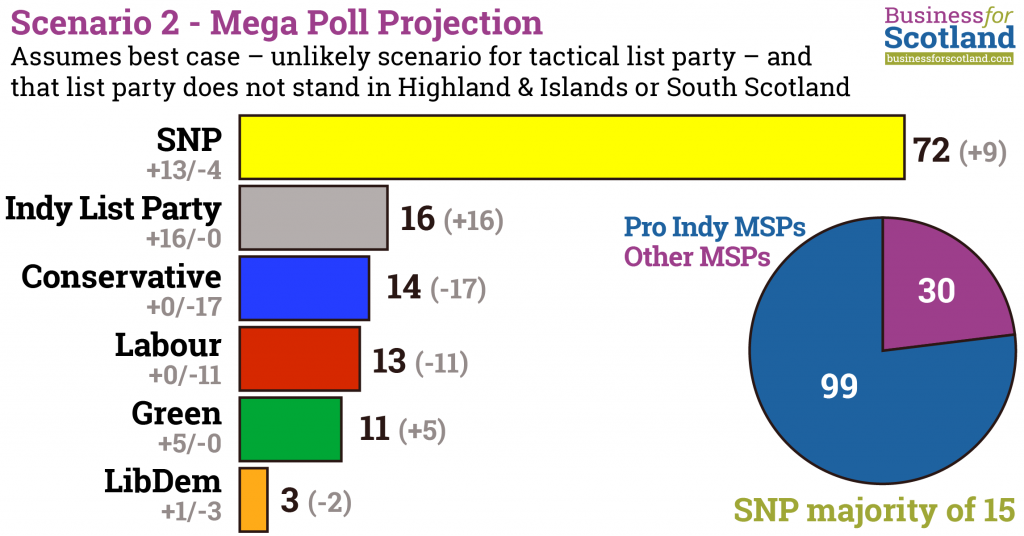 Verdict: Theoretically pleasing for supporters of the idea but highly unlikely due to difficulty and cost of reaching the general public with tactical voting initiatives. Note that the SNP have a lower majority though and although that may not bother non-SNP members, the SNP leadership will be furious. 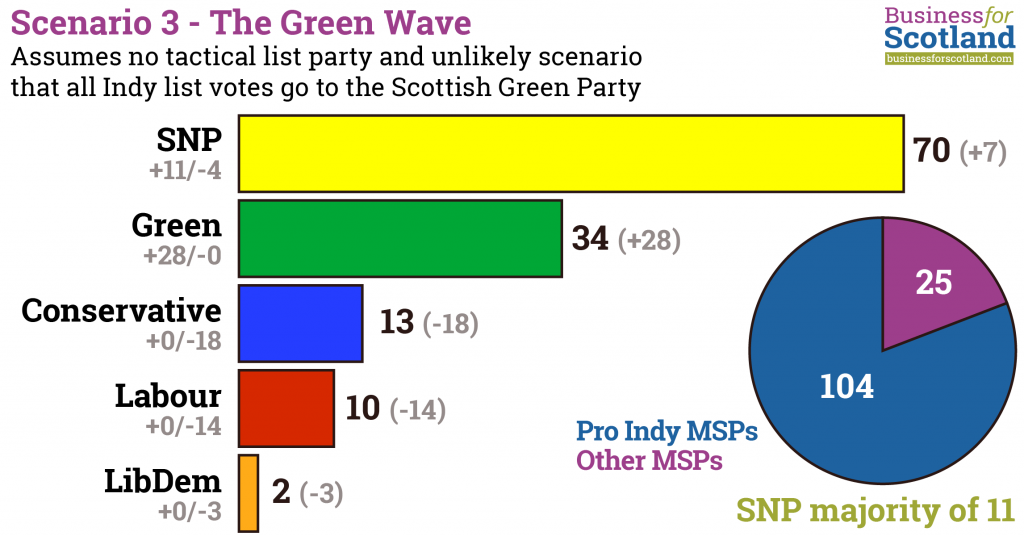 Verdict: This is what the Greens will campaign for but pretty unlikely due to the determination of the new list party leaders to be on the ballot. Should the list parties fail to gain credibility and get organised, the Greens could yet massively benefit from tactical voting.

Projection 4 – Assumes slower but still successful adoption of the idea based on Roper’s concentric cycles theory and Rodger’s adoption curve, factoring in significant SNP pushback on the idea and calls for Both Votes SNP. 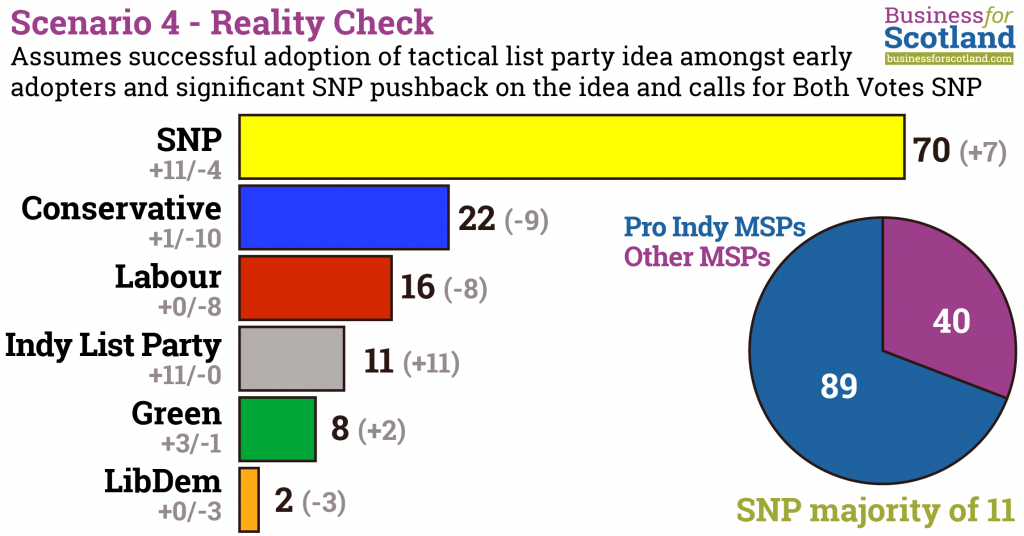 Verdict: The most likely case scenario. However, this is only slightly more likely than the Scottish Green Party utilising its established position to triangulate the tactical list voters in the general public who are more supportive of the Greens than hardcore SNP supporters.

What this poll tells us is that amongst the most active supporters of independence on social media the idea of a pro-independence list party has gained enough traction that it is almost a certainty that there will be such a list party on the ballot come Holyrood 2021. Regardless of how you feel about that, it’s now a reality that all the players will have to deal with. However, the existing players may yet find themselves stalking horses for a highly organised, highly funded organisation, with a recognisable figurehead, that would cast them into obscurity, come ballot.

So how will the main parties likely react?

The Scottish branch of the Conservative Party

The Scottish branch of the Labour party

The Scottish Branch of the Liberal Democrats (are they still a major party?)

What could go wrong for the list party idea?

At this point, we can see that there is enough interest to make a pro-independence list party inevitable. We cannot say how well it will work yet. It is only when a poll of the general public with the named list parties is actioned later in the year, that we will know which of the scenarios is most likely.

The idea appeals to a lot of independence supporters and the math seems simple, except that it’s not. It gets less simple with every extra pro-independence party on the list. A lot can happen between now and May next year. A hard Brexit will most likely happen at the end of the 2020 transition period and if the first COVID-19 wave remerges in England but not in Scotland then independence support will soar. The unionist parties going into the next Holyrood elections have nothing, literally no ammunition at all. All they have is the Alex Salmond inquiry on which to pin their hopes and the claim that the UK can protect Scotland’s economy during the COVID-19 recovery, a claim that lacks any credibility as people can see that the UK’s mismanagement caused the problems in the first place.

Would the pro-independence list party give the unionists ammunition they don’t currently have? Probably, but it could still work and wipe out most of the unionist MSPs. And so to my personal opinion, what’s the point? I like the list system. Without it, the SNP and Greens would not have become the force in Scottish politics that they are. What’s the goal? My goal is independence, I don’t think many of the unionist MSPs are fit for purpose and I would like to see the back of them, however, it matters not to me if they lose their seats in May 2021 or after Scotland decisively votes for independence, possibly as soon as Autumn 2021. I want a referendum and I want the result to be in the bag before we even call it. That’s the path we are on and I see this as a distraction.

Sure the SNP has opened the door by seeking to speak to the undecided on independence and somewhat taking their core vote for granted, with some internal wrangling over Alex Salmond and more woke policies, but the general public doesn’t really care about that. They are starting to care about independence and surely that should be our focus at this crucial point?

BfS will never suggest how to vote to anyone, it’s not our job. We are not party political, we are pro-independence and pro wellbeing/new economics and that’s where our focus remains.

I hope this helps and we will poll again in the Autumn once the list party names and manifestos become clearer. 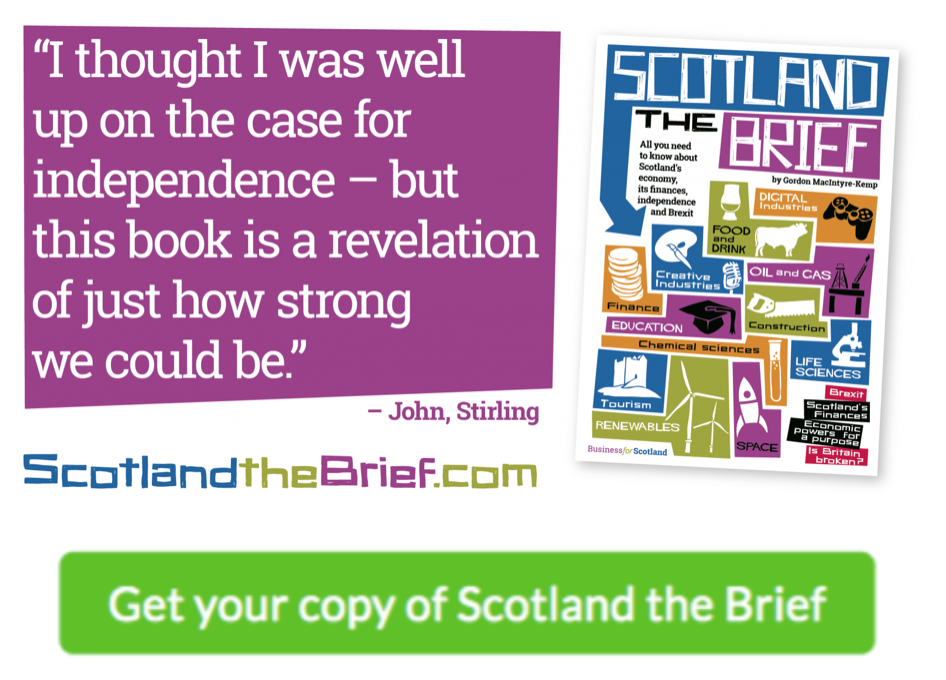