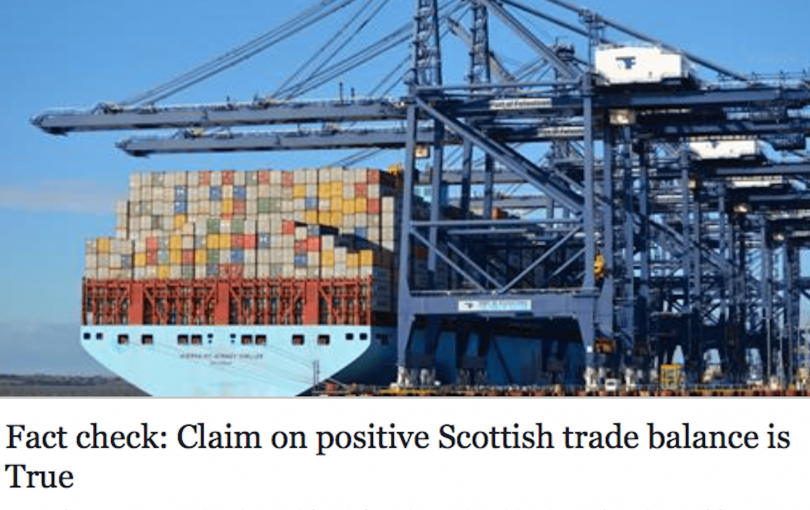 Scottish fact check site The Ferret has (probably unintentionally) duped Scottish independence supporters into sharing an article that falsely suggests Business for Scotland and HMRC have gotten their facts wrong.

At BfS we debunk the ridiculous scare stories of those who want to put Scotland down. We do our own research, at times even explaining to global Think Tanks the mistakes we have found in their methodologies. We need to be sure that our claims are factual and stand up to scrutiny. So much so, we publish all of our sources in our infographics.

So when The Ferret, a Scottish fact checking site was launched we were all for it. We can’t allow factual inaccuracies and false claims to damage democracy, and a politically neutral fact checking site is something we wholeheartedly support. 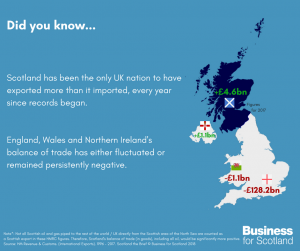 As a result, when The Ferret asked us for our sources on a popular infographic (see latest version above) on Scotland’s international trade balance we were more than happy to oblige. Firstly, because we are 100% confident in the data, and secondly, in this case it’s not actually our claim, it is the UK Government’s. We illustrated the conclusions of the HMRC report on international trade, so unless the UK Government is misleading us about Scotland’s positive international trade balance (why would they?) then we were confident that we were going to get the highest fact check verdict of ‘True’. It was therefore no surprise that we got just that. See the image below: 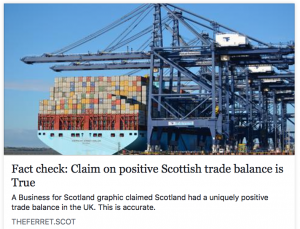 Following the first release of The Ferret’s article on Tuesday evening (20th March), they became confused and muddled in their answers, thereby putting their own reputation in jeopardy by changing their view on Business for Scotland’s research between Tuesday night and Wednesday morning from ‘True’ to ‘Mostly False’.

It begs the question – did someone lean on The Ferret to change their decision?

Four Errors made by The Ferret

1. The Ferret changed their verdict about Business for Scotland’s research from ‘True’ to ‘Mostly False’

On the left is The Ferret’s initial article correctly stating the information was ‘True’ but accompanied by a Facebook post that actually contradicts the headline.  (Click on the images to enlarge). 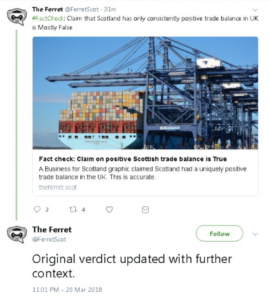 The fact that The Ferret got the verdict on Business for Scotland’s graphic wrong (eventually), is one thing. However, the fact that their original (correct) verdict – ‘True’ – was altered after hundreds of pro-independence supporters shared it on Facebook and Twitter, is an absolute disgrace.

Facebook and Twitter have been filling up with comments from people saying the article’s heading now says something different from text of the Tweets. Almost every independence supporting group now has an article linked by highly influential independence supporters which, because of the change, now says the exact opposite of what they had shared.  In other words, BfS supporters and members have been duped into sharing an incorrect assessment about our factual graphic.

When people started to point out that the posts were contradictory to the content of the article, they added an update and this is when The Ferret started getting it really wrong.

2. Figures don’t include exports to the rUK, because they are international trade statistics

The Ferret have said that the figures don’t include trade with the rest of the UK. Of course it doesn’t, it’s international trade statistics, as we have pointed out in the graphic, and as Scotland is a country but it is also still part of the UK, you cannot export internationally to a region of the same country.

The Ferret accept that our main claims are 100% true. It’s just that they feel that we did not explain sufficiently when writing (International Exports) in the notes of the graphic, that the figures referred to, well you know, international exports.  They say the context wasn’t clear, but the notes are where we add sources and data to provide context.

Therefore, the question as to whether Scotland has a regional trade surplus or deficit with the rest of the UK is totally irrelevant.

3. There are no reliable statistics to prove that trade with the rest of the UK alters our claims.

As the article continues, The Ferret  just dig themselves an even deeper hole. They seem to indicate that the balance of trade with the rest of the UK wipes out Scotland’s trade surplus (setting aside that we are not talking regional UK trade anyway).  In their article they share the link to the report called ‘Export Statistics Scotland 2016’ which does not in any way refer to regional trade inflows from the rest of the UK, it only deals with exports.  We have searched that report and it doesn’t even include the word “import” or “balance of trade in goods”.

In addition to this, the ‘Export Statistics Scotland 2016’ points out that: “The figures exclude exports of oil and gas extracted from the UK continental shelf.”

In the article they also state that Scotland’s overall trade balance is explained in the latest Quarterly National Accounts (QNA).

OK fair enough, so we called the Statistics Office at the Scottish Government (who compile the reports) and asked – “does the trade data in the QNA include oil and gas exports?”, and they said no. They also agreed with us that it is impossible to say accurately, given the current lack of data available, if the trade balance in goods with the rest of the UK is currently in deficit or surplus. So the Ferret have failed to make their case in the article.

This is from the Quarterly National Accounts explanation note: “Value of International and Rest of the UK export, imports and trade balance for the onshore Scottish economy.”

In other words, it does not include offshore oil and gas.

4. Trade statistics between the Scotland and rUK are based on a survey of over 1,000 businesses and most likely have a high sampling error.

The best statistics we have for measuring trade between Scotland the rUK are based on a survey of just over a thousand businesses who are potential exporters, and again it doesn’t include oil and gas.

Here is a note from the Quarterly National Accounts on the accuracy of Scottish export/ import figures.

Scottish estimates will generally be more uncertain than the equivalent estimates for the UK. This is partly because there is a wider range of data available for producing UK statistics than there is for Scotland. Estimates for Scotland often rely on indirect estimates, apportionments or statistical modelling.

Furthermore, the survey data used for national accounts purposes is designed primarily to be representative at UK level which means that estimates for Scotland have relatively higher sampling error than UK estimates.

Having reviewed The Ferret’s analysis and reasons for changing the verdict from the correct one (‘True’) to the incorrect one, we would have to be charitable to even give The Ferret’s report a ‘False’ rating.

We have asked the Ferret if they will now change the verdict given this new information.  We think it’s not to harsh to say their reputation can only be saved by apologising, and being honest as to why they changed the verdict within a few hours without doing the due diligence on whomsoever supplied the irrelevant data, given they took a week or so to write the first correct ‘True’ verdict.