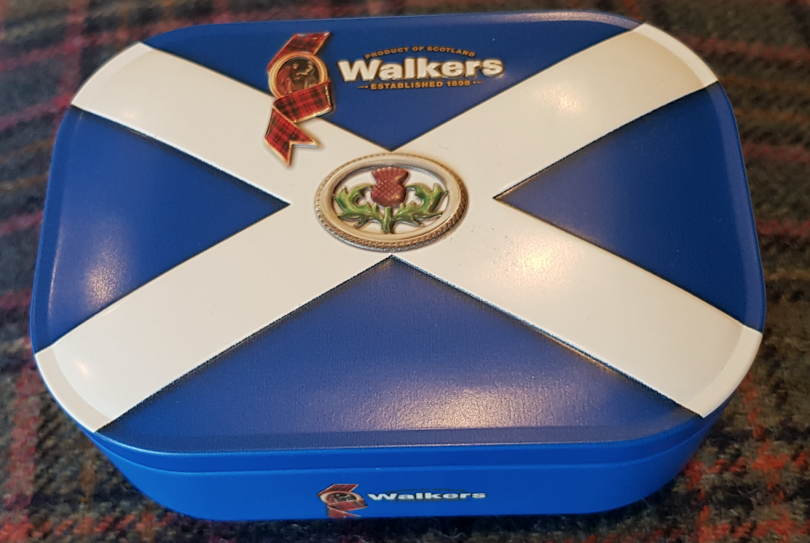 There is a bit of a stushie going on at the moment over national branding, which is actually an issue that is very important to me. Back in the 90s working at Scottish Enterprise (SE) I spent a few years promoting Scottish food and I sat on the boards (really committees) of Scotland the Brand (StB) and The Food of Scotland Exhibition at the Royal Highland Show. StB developed the original Scotland the Brand logo by convincing four leading Scottish design agencies to work together to agree a co-operative design.

The logo was essentially the word Scotland written like a signature in the blue of the Saltire and tartan writing, a swoosh underneath represented an upward trend on a graph and touch of silver, hinted at silver quality of light you get in the highlands. It wasn’t bad and the StB team managed to get most food bodies and retailers to label almost everything from Scotland with the logo.

The logo was a success (to start with), but what was important was that all our research on national branding showed that Scotland is seen differently to GB as a brand and has advantages derived largely from our scenery, natural environment, history, likability and golf. This meant that Scottishness was a sales advantage to tourism, food and drink, and quality manufacturing in particular. On a computer chip, Scottishness had no impact on likelihood to purchase (fair enough) but on a steak, seafood a woollen scarf or luxury manufactured goods, for sure.

That research hasn’t changed, and marketing Scottishness does help in many sectors, creating extra sales, boosting jobs and promoting a positive image for all things Scottish, which is proven to be economically important in the longer term. So it just isn’t helpful when iconically Scottish produce loses Scottish branding and even provenance. However, we have to look at a few issues that a lot of people don’t fully understand. Firstly, own-label manufacturers supply big retailers, and the retailer specifies what branding goes on own-lable packaging. Sometimes the supplier has no choice. Secondly, someone complained to me about Aberdeen Angus with a UK flag, but Aberdeen Angus is a breed of cow, not just meat from the North East, and you can get Angus beef from Argentina, so sometimes it is not as straightforward as some people think.

When a big Scottish brand produces a one-off product for a British event like the Olympics or Wimbledon when the Union Flag is a sales asset etc, it’s usually that a retailer said “do this and here is a big order”. The supplier looks at the numbers and says “hey, why not”? Short-term gain for them, but in the long term a watering down of Scottish branding – but it’s mostly not deliberate or political.

It’s a marketing mistake, and it is ill-advised for companies such as Walkers shortbread to do that, but it’s a world away from the political un-marketing of Tunnock’s making the word NO out of tea cakes in 2014. Walkers are genuinely champions of Scottish branding 99.9 per cent of the time and have helped improve positive quality perceptions of Scotland at home and abroad.

Some people want to organise a boycott of overly “Union Flagged” products and producers but that’s counterproductive. Are they going to also stop shopping at M&S, Tesco, Sainsbury’s and ASDA?  Did they move their mortgage from RBS, or stop filling up at BP? Several leading SNP figures have come to the defence of Walkers and I serve Walkers shortbread at all Business for Scotland board meetings and training sessions – maybe we are all trying to tell you something?

Boycotts make independence supporters look divisive in the eyes of those voters we need to convince, so it’s a gift for Ruth (they are divisive nationalists) Davidson. If a boycotted company’s sales were to drop, jobs would be lost. How do their workforces vote – maybe 60 per cent Yes in a Glasgow/Dundee factory?

If you want to make a difference, go to the local bookshop not Amazon, use the family butcher not ASDA, buy bread from the deli or baker’s down the road not from M&S, save with a credit union not a big bank. More controversially for independence supporters, buy Mackie’s Ice Cream not Wall’s – who cares that the Mackie’s founder was a Unionist and Liberal candidate? The company employs Scottish people and promotes Scottishness and, well, it’s really really good ice-cream.

Of course, write to the customer services department of a retailer and say you are not happy with the lack of Scottish branding; email the producer of a brand and explain the damage they are doing and ask them to reconsider; but be nice and supportive about it. And definitely support the excellent work done by Ruth Watson of #keepScotlandtheBrand.

Let’s be strategic – buy Scottish, support small Scottish businesses and let’s get back to the real business of persuading people to believe in Scotland.