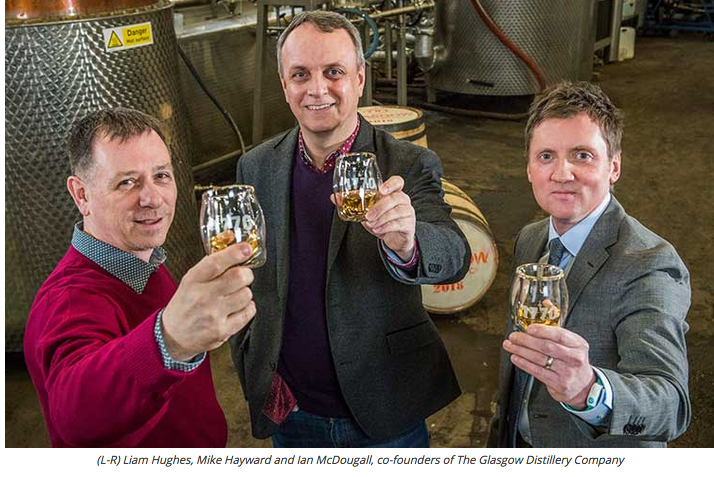 The first single malt whisky to be produced in Glasgow in more than 100 years will go on sale later this year.

The Glasgow Distillery Company, the first independent single malt distillery to open in the city since 1902, and makers of Makar Gin, has announced the launch of 1770 Glasgow Single Malt Scotch Whisky.

With only 5,000 bottles existing globally, bottles will be allocated via a ballot with online registration.

Created and crafted by the forward-thinking team at the distillery, the whisky has been described as refreshing and warming, with hints of pear, rhubarb and custard on the nose, and a lingering peppery yet sweet finish.

The single malt whisky’s hometown has transformed into a hotbed of innovation in recent years, with more new businesses and events setting up in Glasgow than ever before. It’s this spirited mentality that helped to inspire 1770.

Laid down in first fill ex-bourbon casks and finished for a short period in virgin oak, 1770 delivers a clean, full flavour from the very start. Non-chill filtered, it is bottled at 46% ABV.

The first few 1770 casks began to come of age this week, ahead of its official on-sale date of 3rd June. Those who register interest on glasgowdistillery.com between now and then will be entered into a ballot to be given the chance to purchase the limited new release, which will be delivered later in the year.

1770 is the first wave of single malt whisky to be released by The Glasgow Distillery Company – but not the last. In 2019 and 2020, peated and triple-distilled single malt expressions will be released as part of continued annual limited-edition releases.

Scottish rural businesses who go digital could add £2.5bn to Scotland’s economy, according to a new report.

The report, commissioned by Amazon, shows Scottish rural businesses could add between £1.2bn and £2.5bn annually in GVA to Scotland’s rural economy and at least £1.44bn to rural business turnover by going digital.

“Over the past 20 years, we’ve seen opportunities for rural entrepreneurs transformed through e-commerce, better delivery services and growing access to fast broadband. But as today’s report shows, there’s much further to go before anyone can say the rural-urban divide has closed,” said Doug Gurr, UK country manager at Amazon.

“Embracing digital technology not only benefits the economy; it also allows rural communities to combine great quality of life with access to global opportunities. We are working to play our part in helping achieve the report’s ambitions through programmes such as Amazon Academy events and webinars, where last year we helped hundreds of rural businesses learn how to go digital.”

Empowering women in technology is key to boosting the economy, according to a report launched  on International Women’s Day.

The report reveals the critical role women play in driving economic growth across the UK, with detailed research on 1,279 women-led companies showing a total contribution of £25.9bn in revenue to the UK economy.

At the heart of these “robust, dynamic and scalable” businesses across the UK, the report shines a light on the hidden figures bolstering economic growth:

The world’s first whisky cryptocurrency has been launched in Scotland, offering investors the chance to own a share of a £40 million portfolio of world-class scotch via a new cryptocurrency, CaskCoin.

The CaskCoin portfolio, a blockchain-based whisky investment fund, is comprised of a range of casks, including some of the most sought after old and rare single malts, which are aged between 21 and 50 years old in cask.

Each coin will be backed by physical ownership of a share of every cask in the CaskCoin portfolio, stored in bonded warehouses in Scotland, opening the portfolio to global investors.

An innovative new action plan will put cyber skills ‘at the heart of learning and development’ and focus on improving resilience to online and digital threats.

The aims of the action plan are to:

The action plan was launched by Economy Secretary Keith Brown while meeting BT apprentices in Edinburgh as part of Scottish Apprenticeship Week 2018.

Bank of Scotland’s latest Purchasing Managers’ Index report shows both the manufacturing and services sectors north of the Border experienced contraction in February. It signals overall output of the Scottish private sector economy has fallen in two of the last three months.

The output index for Scotland fell from 50.3 in January to 49.5 last month on a seasonally adjusted basis, dropping below the level of 50 deemed to separate expansion from contraction. It was 49.4 in December.

Scotland’s manufacturing sector saw a sharp downturn in its fortunes between January and February, with a fall in its output index from 52.2 to 48.8 signalling a move from modest but significant expansion to contraction.

The survey also signals a sharp fall in new export orders for Scottish manufacturers in February, following a significant rise in January, in spite of the boost provided to the competitiveness of UK-based companies in overseas markets by sterling’s post-Brexit vote weakness. The fall in incoming export business for the sector last month was the sharpest since June 2017.