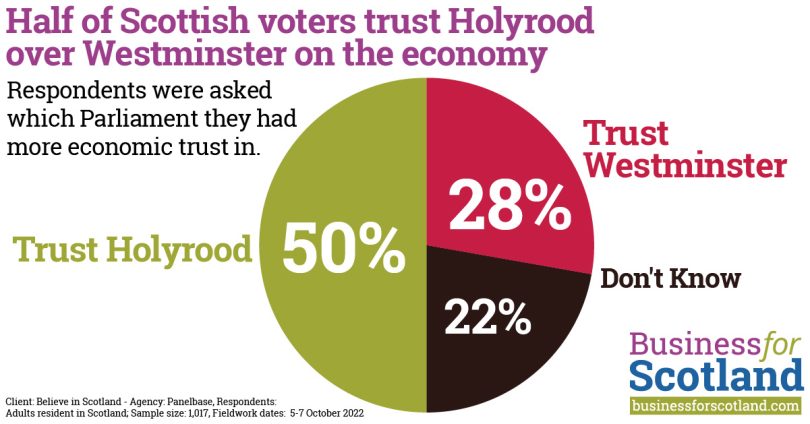 Two polls published this week indicate thats voters in Scotland are losing faith in UK governance.  A poll by Panelbase for Believe in Scotland found that 50% of Scottish voters had more trust in the economic competence of the Holyrood government than they did in the UK Government. Only 28% had more trust in Westminster’s economic competence and 22% answered that they didn’t know. This is not just a damming indictment of the political and economic chaos of the last few weeks but also a clear verdict on the direction of the UK economy since Brexit was forced upon Scotland against its democratically stated wish with a 62% Remain vote in the EU referendum.

Trust in Westminster is collapsing

A growing number of people in Scotland – now 75% – want the Scottish government to have more say over Scotland’s affairs than Westminster.

The Scottish government is more trusted with the economy, our research shows

This confirms Believe in Scotland’s research showing Scotland’s elected representatives are more trusted with the nation’s finances and economy. The fieldwork was conducted even before Liz Truss’ was forced to resign – which is likely to intensify the trend.

One of the big questions relating to Scottish independence is how voters will react to the current economic chaos.  Will they feel that Scotland should seek to do better and run its own affairs or will they think that now is not the time for independence as we need to button down the hatches?  The answer it seems is a bit of both but with more people moving towards supporting independence.  Panelbase asked: “Does the current economic turmoil make you more or less likely to support independence?” 40% answered “More likely”; 34% answered “Less likely” and the remainder said there was no change in their attitude. 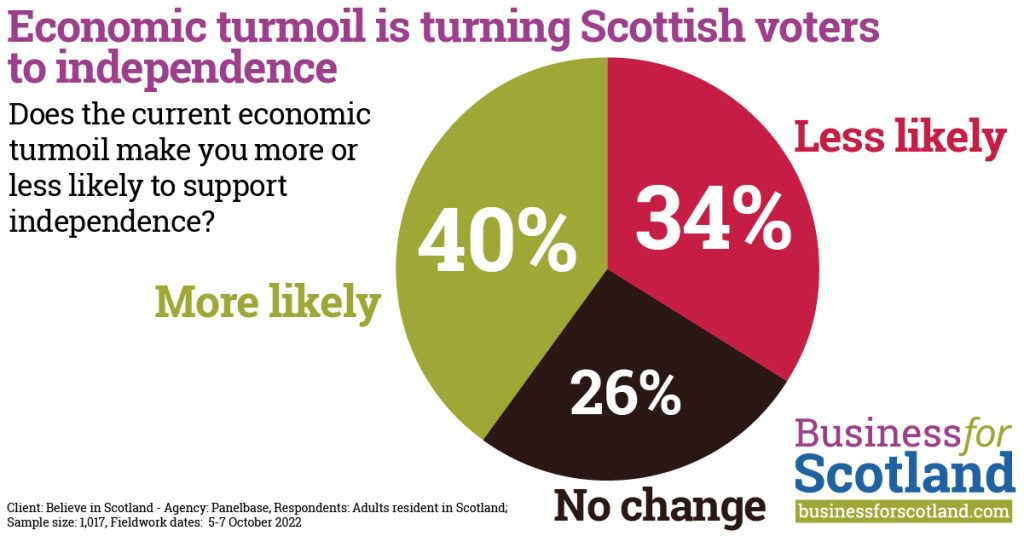 Panelbase also asked the question: “How would you vote in a Scottish independence referendum?” This resulted in a 50/50 tie which is in the ballpark of most recent polls. However, it is worth noting that means Yes support is now double what it was a decade ago.  The underlying sentiment captured by the Social Attitudes Survey marks a significant shift in the direction of independence.  These are signs that what we might call “an independence mindset” is building in Scotland and it represents a smaller step from people holding these beliefs to backing independence than in 2014.

That research, published in The National also showed support for independence increased to a landslide of 61% if the question was phrased to promise voters a new vision of the economy based on Wellbeing, where fairness, equality, happiness and the environment are put on a par with economic growth as drivers of socioeconomic policy, which would include a higher state pension. 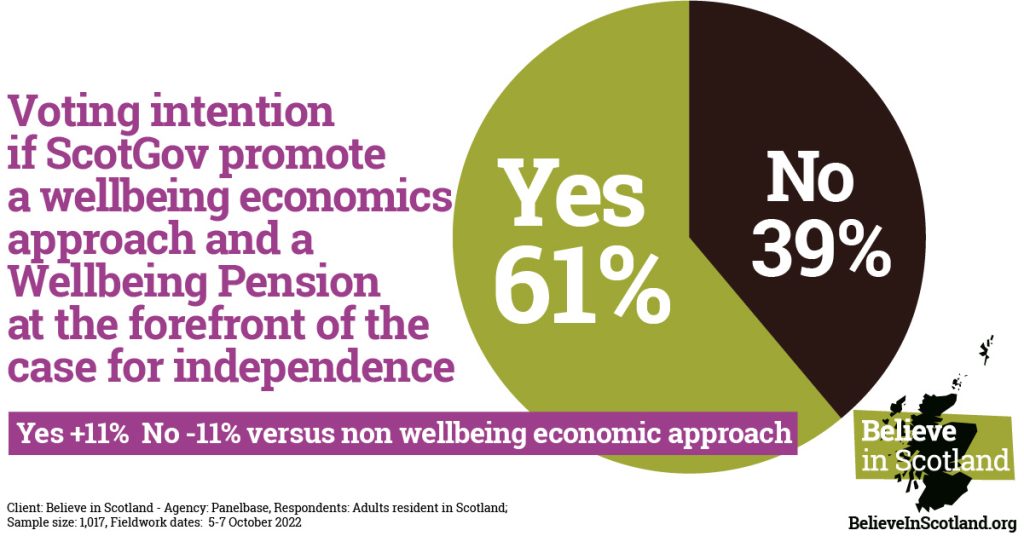 Trust in Holyrood is increasing

The numbers for trust in the Scottish government are going the opposite way to Westminster, with about two-thirds of Scots saying they trust the government to act in Scotland’s best interests either “just about all the time” or “most of the time”.

In the previous Social Attitudes Survey conducted in 2019, 15% of respondents said they trusted the Scottish government to act in Scotland’s interests “just about all the time”. Another 46% answered “most of the time.” That makes a total of 61%.

The Social Attitudes Survey, covered by some UK media outlets – though not all – this week revealed a significant shift in confidence from Westminster to Holyrood. It showed that many more Scots trust the Scottish government to act in Scotland’s interests all or most of the time. They also want to see Scotland’s elected representatives deliver more progressive policies, and they are prepared to pay higher taxes for better health and social care.

The last few years of UK government have been marked by increasing levels of chaos and economic turmoil. Ever since the Brexit vote, the pound has been on the slide and Scottish businesses have had to contend with increased bureaucracy, cost and complexity. The UK government is pursuing policies very different from the ones Scots voted for.

The Labour Party also supports maintaining Brexit and argues that long periods of Conservative rule are a price worth paying to remain in the Union. But most Scots don’t buy that any longer.

These polls reveal the underlying trends that are pushing Scotland and England apart. An independent Scotland would be able to cut the cords binding Scotland to a dysfunctional Westminster.

Notes: Here is a summary of key findings from the Social Attitudes Survey.

Attitudes to Government and the Scottish Parliament:

Views on level of tax and government priorities:

Views on the National Health Service in Scotland:

Views on the economy and standard of living in Scotland:

The Scottish Social Attitudes Survey 2021-2022 was conducted by the Scottish Centre for Social Research (ScotCen) between 21st October 2021 and 27th March 2022.

The Panelbase survey was conducted for Believe in Scotland from October 5-7, 2022