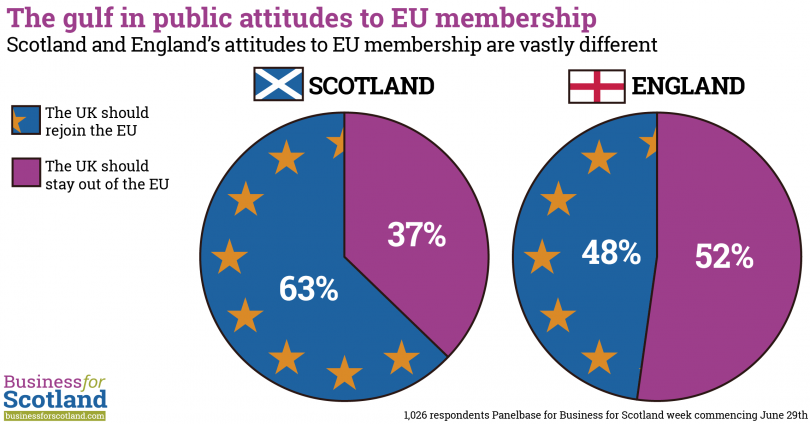 A new poll by Panelbase for Business for Scotland demonstrates the absolute gulf in public attitudes to EU membership between Scotland and England.

Sixty-three percent of Scottish voters would vote to rejoin the EU if offered that option in a referendum. 63% rejoin versus 37% stay out is an even bigger margin than Scotland’s Remain vote of 62/38 in the 2016 EU referendum. That is actually an incredible result, as remaining in would have been an easier option for people to accept than rejoining.

The same question when put to English voters, also by Panelbase, shows that England would vote to stay out of the EU by 52% to 48%.

This represents a chasm in public opinion between Scotland and England and there is evidence that the gap is widening. The same question polled for Scot Goes Pop by Panelbase, published June 10th, found that 60% of respondents would vote for Scotland to rejoin the EU, and 40% said it shouldn’t. That is a 3% increase in only three weeks and clearly demonstrates that Brexit is a key driving force in the rising momentum for independence. A new momentum that was first identified by the BfS poll in June that found that 54% of Scottish voters would now vote Yes. This is a number that many thought was a rogue poll until last week’s Sunday Times poll confirmed exactly the same result. 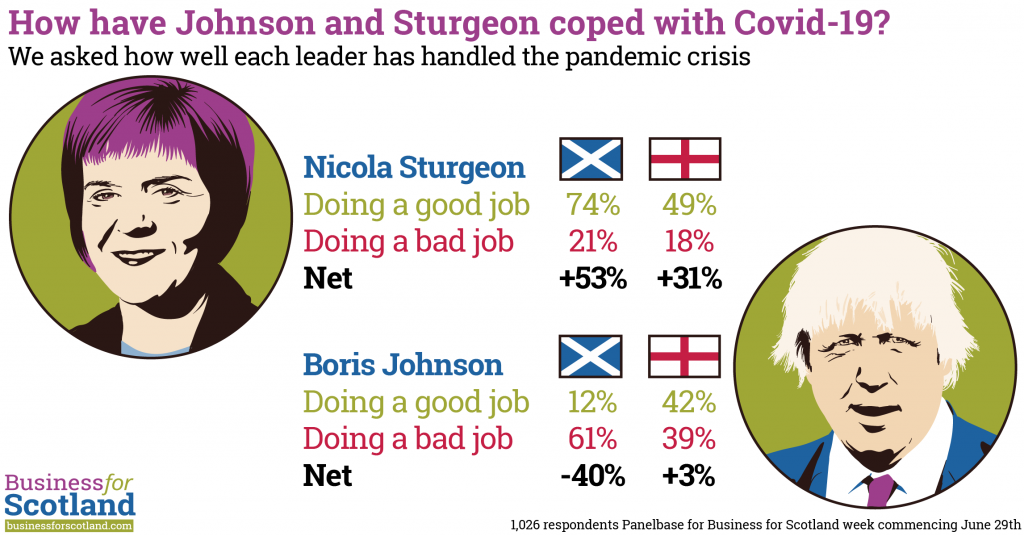 The First Minister’s humanity and obvious care for the wellbeing of the nation is allowing those voters who have other issues with Westminster’s obsession with Brexit and their right-wing economic policies to believe that the Scottish Government is a safer pair of hands in a time of crisis. That leads to increased belief in the overall competence of the Scottish Government and makes it easier to switch to Yes. Don’t underestimate though the psychological impact of that 54% figure. It means that independence is the majority opinion and therefore it just feels safer than it did in 2014 for those that were influenced by scaremongering.

The keys to delivering Scottish independence are, therefore:

Back to the details of our poll:

Every age group in Scotland would vote to rejoin the EU

The only demographic not voting to rejoin are females that are 55+ and they are split 50/50. 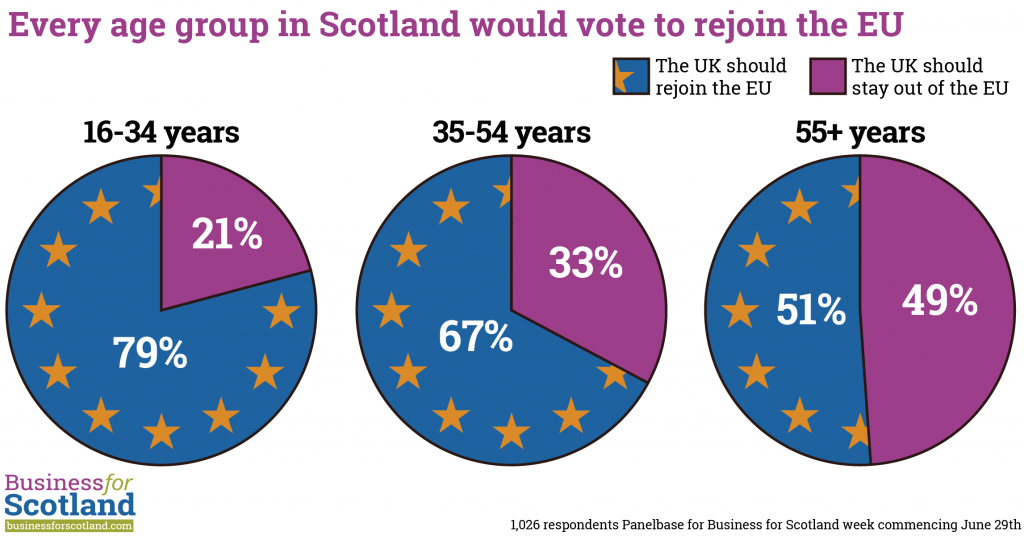 However, the key to Scottish independence and the growth in support is that the wealthier people described as ABC1s are 69% for rejoining the EU and only 31% against. ABC1s, those thought to have more education, better-paid jobs, large mortgages etc., and the younger ones in this category make up the majority of soft No and undecided voters on independence. Those that are more centre and centre-right also buy into the wellbeing agenda and the next independence referendum will be decided by which way they jump. Also Brexit means they are jumping ship from the failing union to the growing opportunity of Scottish independence.

In terms of political parties, both the SNP and the Lib Dems registered 83% support for rejoining and 17% against, which just so happens to be the mirror image of how Scottish Conservative voters split: 17% for rejoining and 83% for staying out. Labour voters were split 63% rejoin and 33% stay out.

The final notable statistic was that even those born in England but living in Scotland (a huge chunk of the 2014 No vote) were 59% for Scotland to rejoin the EU and 41% for staying out.

So, Brexit will be the thing that breaks the union, supported by the rising belief that the Scottish Government is more competent than Westminster and Westminster’s anti democratic stance on Scotland’s right to choose. The killer blow, however, will take the Scottish Government to move on from the Sustainable Growth Commission and adopt a more enlightened wellbeing based new economic approach to building back better after this crisis. Watch this space.

Data tables for the statistically minded