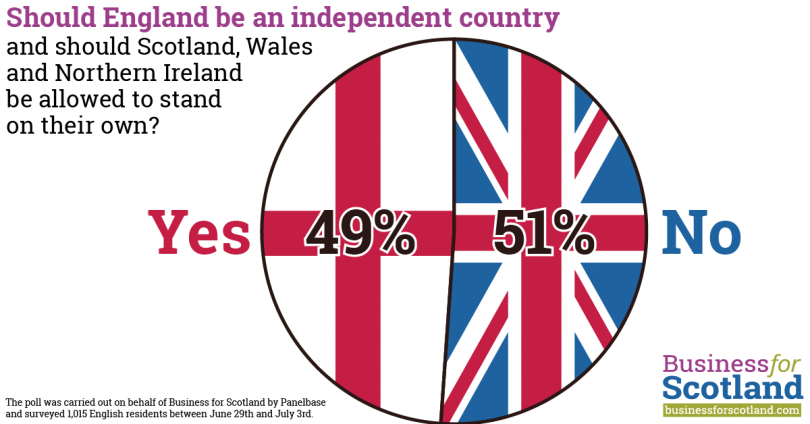 The poll was carried out on behalf of Business for Scotland by Panelbase and surveyed 1,015 English residents between June 29th and July 3rd and asked if people agreed or disagreed with the statement: England should be an independent country and Scotland, Wales and Northern Ireland should be allowed to stand on their own two feet.

What really stands out though is that respondents who voted Conservative in the December 2019 General Election were 52.5% in favour of English independence and 47.5% for the Union. That contrasts starkly with Scottish based Conservative voters in the last election who were 94% in favour of the Union.  It might come as quite a shock to Scottish Conservatives that their party members across the border are just not that bothered about keeping the Union together.  In Scotland, it seems, Conservative voters are British nationalists but in England, the majority are now English nationalists.

So, if the Conservative Government’s supporters and the Labour opposition’s supporters would vote for England to become an independent nation then why did we only register 49%? Well, it’s largely down to the Lib Dems; they may have far fewer voters but they are strongly British Nationalist with 67% of them against English independence when you remove the undecided. Even then 31% neither agreed nor disagreed and so even within the Lib Dems there is a huge chunk of their voters that just aren’t that bothered about the Union, hardly a ringing endorsement.

Drilling into the data a bit deeper seems to suggest that wealthy home owning, retired, Liberal Democrats and older females make up the majority of those that support the Union on the English side of the border. 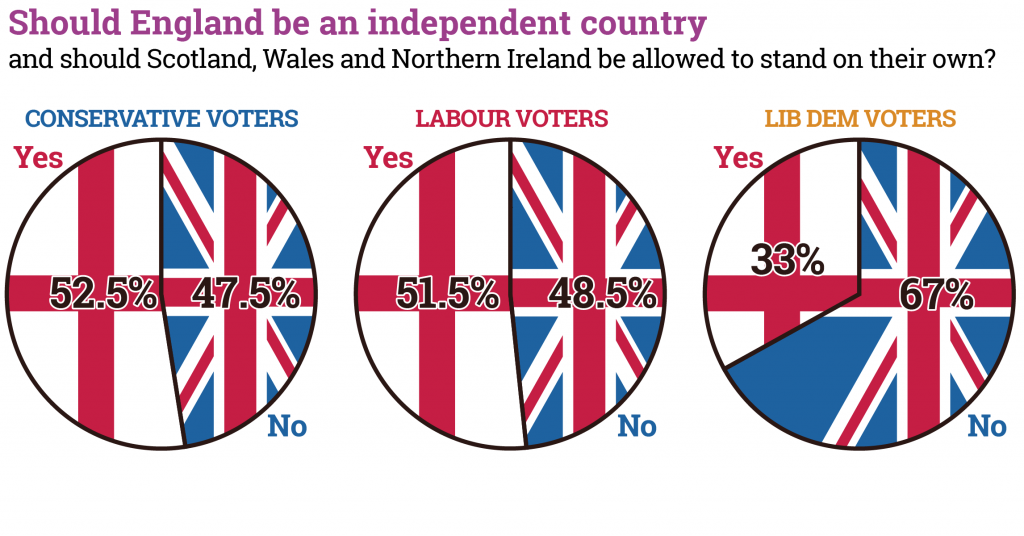 If current trends are to continue then we suspect the first poll to record 55% YES and 45% NO to Scottish independence, a complete reversal of the 2014 result, will be carried out in September this year. Not long after that, we expect support for English independence will also be in the majority.

Already the majority position amongst Conservative voters in previous polls and now in this one with Labour voters too, how long will it be before Boris Johnson (always a populist) will realise that he can position himself as the Father of the new English nation and rid himself of 53 Opposition MPs out of the 59 elected from Scotland or fight a losing fight and be the Prime Minister that lost the Union?

Surely the idea of four sovereign nations in the British Isles united in friendship and partnership rather than bogged down in endless constitutional wrangling within a disunited kingdom is something that will appeal to the commonsense of voters in every corner of the UK?
Data Tables for Poll