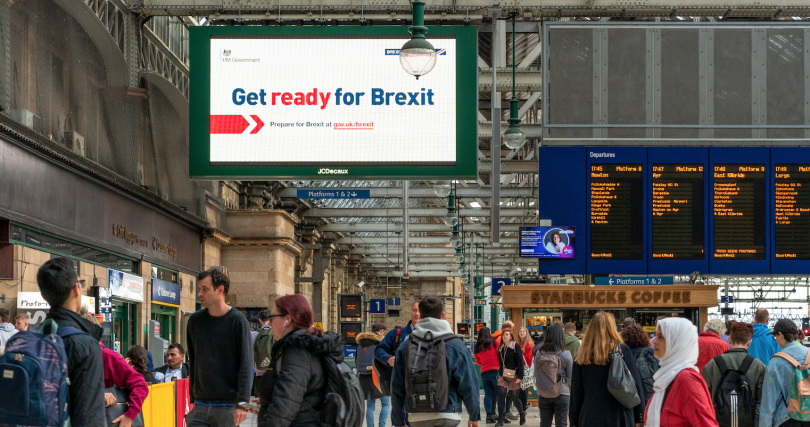 It’s quite extreme to claim the UK Government is deliberately following a policy that will kill potentially tens of thousands of its people, however, all the evidence points that way and it has to be called out.

It’s clear the UK Government is not following the science or listening to public health advice on the loosening of COVID-19 lockdown restrictions. Leicester isn’t witnessing a second wave, it’s still the first wave; the result of a government following a deliberate policy of reopening the economy before the first wave is under control. A second wave would be unfortunate, not controlling the first wave is incompetent or just downright malicious. The UK Government knows the risks to human health and the potential for mass fatalities with this reopening strategy but it doesn’t care and it’s obvious why.

Boris Johnson is PM for one reason only – Brexit. If he fails to deliver Brexit then no matter what else happens during his premiership he will be deemed a failure by those that voted for him. He and his closest advisers are very aware that Brexit will harm the economy; they may believe in the long run they can introduce reforms that will allow UK PLC to be more competitive (more on that later), but they know in the short and medium terms the economy will take a hit, people will lose their jobs, businesses will go under and wages will be depressed. 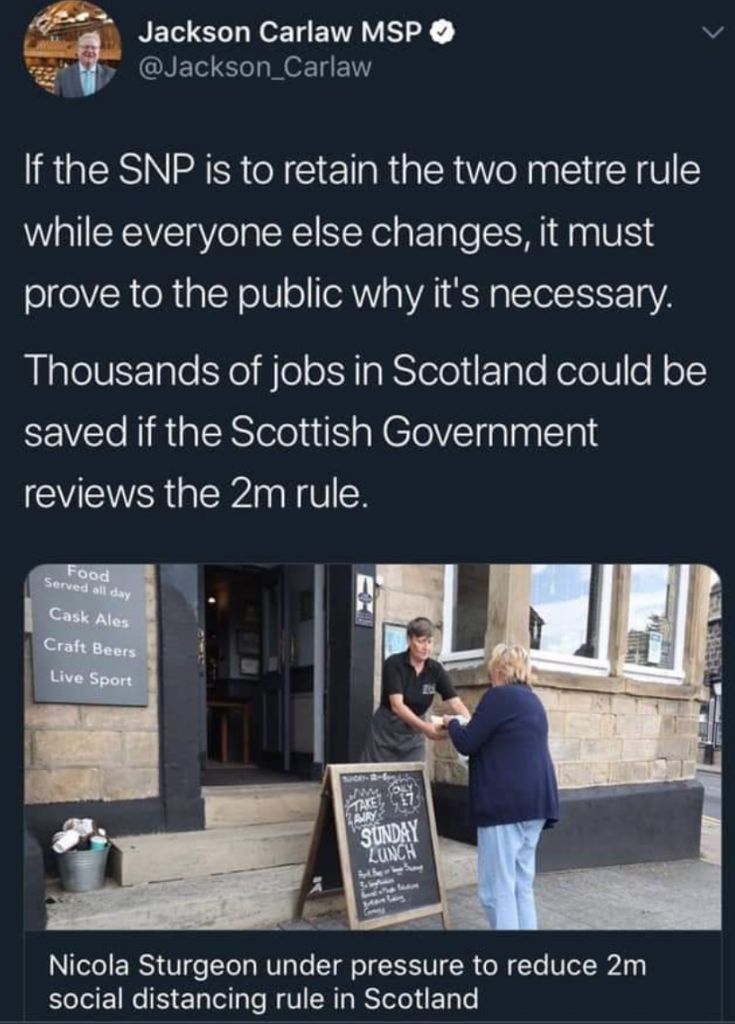 No, The UK Gov needs to be truthful about why they are abandoning caution.

A hard Brexit with a lockdown economy just doesn’t compute on any level so regardless of whether the biggest public health crisis of our lifetimes is under control, the UK Government needs to reopen the economy and, to paraphrase the PM himself, the British people will have to take it on the chin.  The Scottish Conservatives are in on the plan, with  Jackson Carlaw trying and failing to get the Scottish public on-side with easing lockdown at the same speed as England.

COVID-19 will cause a massive slowdown of the economy, no one is denying that, but it offers cover to the UK Government for a hard Brexit. They can blame all the economic problems of a hard Brexit on COVID-19 and blame the re-emergence of COVID-19 on the people for not following the rules and social distancing properly, rather than on the UK Government’s incredibly unhinged and incompetent response to the virus itself.

If they had followed the logical position of extending the transition period for two years and waited till COVID-19 and the economic damage were overcome, who would then accept the economic damage of Brexit on top of the pandemic? Who would they blame when Brexit inevitably crashes the economy? Who would re-elect the Conservatives if they had presided over two major economic crises in one term of office, both of which can be directly attributed to their own incompetent decision making?

If Coronavirus doesn’t start super spreading again then it will be down to luck, not UK Government policy. So why does the UK Government want to extend the pandemic and then hard Brexit even at the potential costs of thousands of lives? The answer is simple – because you (the voter) would not be willing to accept the harsh economic reforms the Conservatives want except in extreme circumstances. Johnson will claim he has delivered Brexit as promised, that COVID-19 has badly impacted on our economy, but that Brexit gives us a chance to reform and come back stronger. However, to take advantage of those massive Brexit opportunities we need – at least in the short term – to take emergency measures to make UK PLC more competitive.

To achieve that we will have to give up workers’ rights and face a weakening of health and safety regulations, a reduction in real terms of the minimum wage, fewer employment protections, less regulation of banks, investment houses and the financial transactions of big corporates, lower standards in materials and goods and food safety. You see, the UK Government views Brexit as a means to an end of smaller government free markets with almost no touch at all because that is what they think will make the economy boom. There might be a short term boom, compared to COVID-19 levels of GDP anyway, but society will be harmed beyond anything the deindustrialisation of the Thatcher years created and so what boom there is will quickly bust and Britain will be further broken – economically, socially and constitutionally. 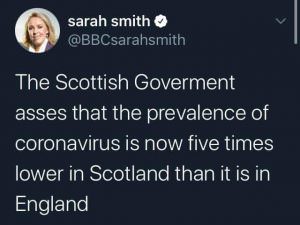 The Scottish government is far more cautious and rightly so, even the BBC which stands for British Broadcasting Conservatives has had to admit the greater success from the Scottish Governments approach.

In terms of economic and social values, a chasm is opening up between Scotland and England that can’t be breached. The Scottish Government, after next year’s Holyrood elections, will instigate a second independence referendum and the question will seem less like: “Do you think Scotland should be an independent nation?” and more like: “Do you really think running our own affairs and following a wellbeing approach is more dangerous than staying with a UK Government that doesn’t care if you live or die?”