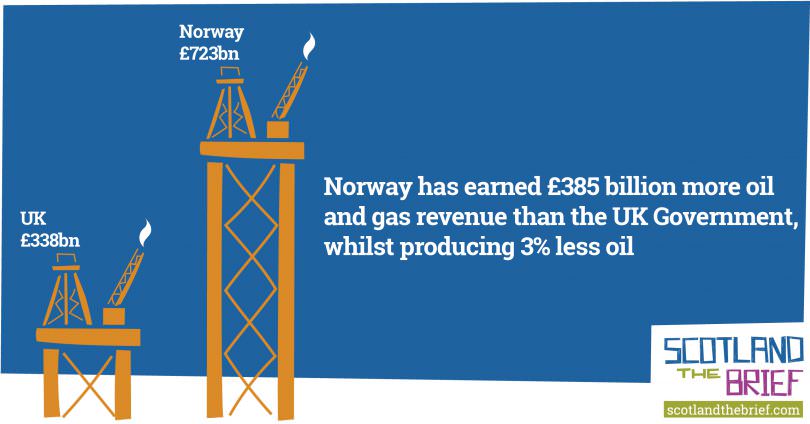 Norway and the UK have managed their oil and gas industries very differently, resulting in a substantial contrast of fortunes in their economies. A key argument against independence is the claim that Scotland would be too small a nation to maximise the benefit of its oil industry. However, when comparing the UK and Norway’s oil and gas production, and their revenues generated from this industry, we can see that Norway (a smaller independent northern European nation) has generated £386bn more than the UK Government in tax revenues since the production of oil and gas began. 402 403

A comparative loss of £386bn in tax revenue amounts to a monstrous failure in resource governance by the UK Government. With comparative geologies, original production costs, oil grades, prices and resources, Norway – a country very similar to Scotland in population and geography – has collected a huge revenue windfall, whilst Scotland has not.

We have already explained the cumulative deficit or the share of the rest of the  UK’s national debt that has been loaded on to Scotland’s accounts. However, it is worth noting that even with debt loading and the Croydon Principle, Scotland’s indicative deficit in GERS was lower than the UK’s for 33 of the 38 years for which we have figures. So what changed?

The price of oil crashed in 2015. Brent crude averaged $52/b in 2015 after having averaged $98/b in 2014. 405  If the claims that Scotland was dependent on oil and gas were true then Scotland’s economy would have crashed with it.

However, Scotland’s economy did not even enter into a recession. The economic growth for the year was negative, at 0.04%. However, the onshore economy grew 1.6%, according to the GDP figures in the 2015/16 GERS report, as the benefit of lower oil prices boosted the onshore economy. Hardly the armageddon predicted during the independence referendum if oil prices dropped, never mind crashed the way they did.

Contrast that with the collapse of the financial markets in 2007, upon which the UK economy was twice as dependent on as Scotland was on oil. This led to six consecutive quarters of negative growth – in other words, a recession, from March 2008 to July 2009. 406

The answer is that the UK Government stopped collecting tax from the big oil companies. In response to falling oil prices, the UK Government decided to cut Petroleum Revenues Tax (PRT) in 2015 from 50% to 35%, and in 2016 it was further reduced to 0%. 409 The supplementary charge was also cut from 62% to 50% to 10% during the same time. 410 This meant that the UK earned less in tax revenue from its oil and gas industry. Despite oil prices rising again and stabilising at between $60.00 and $70.00, and increased production and cost-cutting helping to lower some UK production costs to around $15.00 per barrel, 411 the zero PRT rate means that revenues will not increase in line with oil company profits.

This also means that the illustrative Scottish deficit figure will not reduce as tax revenues are negligible.

It was the oil workers of Aberdeen and the North Sea services companies (more often Scottish owned) that took the hit when the price crashed. The UK Government protected the big oil companies and their shareholders.

From their last sets of accounts, the profits declared by the four biggest oil majors operating in the North Sea were as follows: Shell $21.4bn;
BP $12.7bn; 414 Exxon $20.8bn; 415 ConacoPhilips $6.3bn. 416 The North Sea giants, Shell and BP, are now more profitable than they were before the oil price crash and have received billions in tax cuts and credits between them.

Maybe it’s now time to start phasing in the taxes again and investing the profits in renewable energy projects? This, of course, would return Scotland’s finances to the default setting of “significantly better than the UK’s”.

So, the UK Government’s decision to significantly reduce tax on oil companies has had a major impact on Scotland’s national accounts, leading them to show a larger fiscal deficit than the rest of the UK. Since 2015, £1.822bn has been lost from PRT alone. 417

This support to large oil companies (whether necessary, advisable or otherwise) was managed through tax rebates, which have effectively wiped out Scotland’s North Sea revenues. Around 60% of the cost of the PRT cut is deducted from Scotland’s accounts in GERS, which cost Scotland around £340m in 2017/18. 418

To make this clearer, when the UK Government lowers a set of revenues which is almost completely attributed to Scotland as a region of the UK, there is a major reduction in tax revenues assigned to GERS.

On the other hand, if the UK Government had maintained tax levels but then offered grants from the Treasury retrospectively for decommissioning and exploration, then only a population percentage (8.4%) of the costs of that grant support would have been deducted, and the illustrative deficit in GERS would be been smaller than the UK’s – not larger.

The UK’s oil wealth was shared on a population basis across the UK, meaning Scotland received approximately 9% of that wealth.  However, the cost of decommissioning is being met solely by Scotland on a geographic basis.  This starved Scotland of investment when it needed it most in the 1970s and 1980s and now creates a false deficit which is used as the key argument against Scottish independence.

If Scotland had kept a geographic share of its oil wealth it would be £508 billion better off than GERS suggests it is now 372.