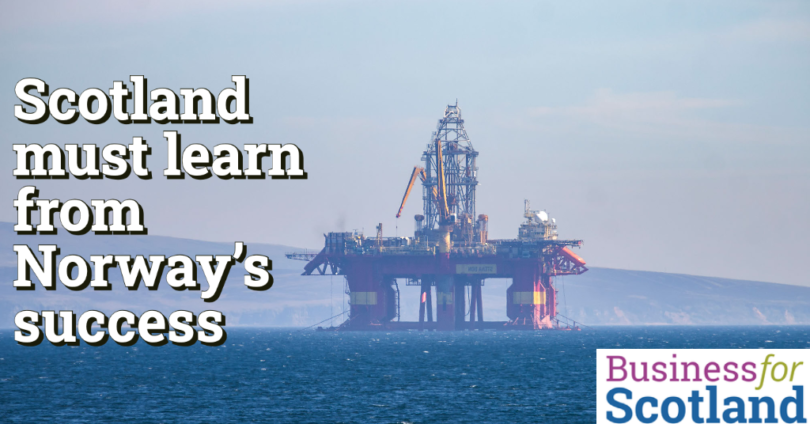 At the time of the 2014 referendum, voters were told it was too late to benefit from Scotland’s oil and gas. They would run out in 15 years, leaving Scotland depending on energy imports from England.

Now, a windfall tax could raise £2 billion on the oil companies’ huge profits. And England imports most of its energy from Scotland. But Scots don’t benefit from that – they are charged more in energy bills than the rest of the UK.

Independent Scotland would have been the wealthiest country in the world

If an independent Scotland had replicated Norway’s policy of creating a sovereign wealth fund, it would now be, per capita, the wealthiest country in the world. It could use its sovereign wealth fund to protect consumers from the energy crisis and invest in a meaningful way in a just transition.

A sovereign wealth fund would have been the likeliest option for an independent Scotland when oil was discovered – it was the normal practice to introduce these. Shetland started a small one, based on a stake in Sullom Voe which is now worth £460 million. It supports Orion, the council-run initiative to develop hydrogen and wind power on the archipelago.

Norway’s £1.3 trillion wealth fund is the biggest in the world – and Scotland’s would have been slightly bigger. The Norwegian Government is using its fund to pay 80% of households’ energy bills as a response to the current energy crisis.  The fund also provides billions to support former oil workers, build Norway’s green energy infrastructure, and invest in renewable technology schemes in developing countries.

Independent Scotland could have invested in a just transition

Scotland could have used its oil wealth to build on the skills and experience it has acquired in the energy sector to become a renewables powerhouse.

The UK government has promised a paltry £27 million investment for the North East’s transition zone. That is nowhere near enough to help the region to transfer from fossil fuels to a greener future.

Scotland’s energy assets remain under the control of a UK Government that puts protecting corporate profits ahead of the national interest. It slashed taxes on oil and gas firms since 2015 – and it now refuses to put a windfall tax in place on the sector’s record-breaking profits. Oil and gas companies are making big profits – they are not the only ones. The Government itself also gets more revenue when prices are high due to the way power is regulated. Other companies such as National Grid are also making extra profits.

A windfall tax on oil and gas companies would likely raise about £2 billion – most of which would be credited to Scotland’s notional accounts, GERS. That’s about 3% of Scotland’s public sector revenue. Adding this to Scotland’s account might ruin the carefully managed scenario that the oil and gas sector is virtually worthless in terms of tax.

(Former Chancellor George Osborne’s £2 billion windfall tax of 2011 did positively impact the 2012-13 GERS – in part that is why there was such a massive amount of propaganda insisting it was about to run out.)

A tiny minority of BP and Shell shareholders are UK pensioners

The UK Government claims a windfall tax would damage the interests of UK shareholders. Yet only 0.2% of shares in BP and Shell are held by the UK’s main pension funds and only a small percentage of total shares are held in the UK.

In the past, the UK Government claimed that slashing corporate taxes would protect jobs. It didn’t – Scotland lost many more jobs than Norway in the period of low oil prices from 2015-2020.

In response to falling oil prices, the UK Government cut Petroleum Revenues Tax (PRT) in 2015 from 50% to 35%, and in 2016 it was further reduced to 0%. The supplementary change was also cut from 62% to 50% to 10% during the same time. Companies were also allowed to claim back taxes paid in previous years.

Westminster also decided to give tax rebates to large oil companies to decommission rigs and to explore for new oil fields. The policy rationale was that it would enable the oil industry to remain competitive and protect jobs. Yet rebates were not specifically linked to any commitment to save jobs. In 2016 Shell, having benefitted from tax rebates from the UK Government and having made many thousands of workers redundant, went on to declare the world’s largest shareholder profit dividend that year.

By comparison, the Norwegian Government maintained taxation levels on oil and gas at 78% and were able to draw upon the oil revenue-driven sovereign wealth fund to assist workers who lost their jobs and invest in a just transition.

Why are the UK’s oil and gas revenues overshadowed by Norway’s?

Norway’s oil and gas industry is state-owned, whilst the UK’s is privatised. Norway views petroleum resources as belonging to the people of Norway as a whole, with the Norwegian state securing a large share of the value creation through taxation and the system known as the State’s Direct Financial Interest (SDFI) in the petroleum industry. This means that the main principle for managing petroleum is that it must result in maximum value creation for the state.

In contrast, UK governments have decided to pursue low corporate tax rates policies. The UK has generated 94% less in taxes than Norway; this is excluding Norway’s revenues from publicly owned fields and through SDFI.

This has not always been the case. Between 1976-1989 the UK generated more tax from oil revenues than Norway, indicating that it was indeed predominantly a policy choice by successive UK governments that reduced public revenue from natural resources. 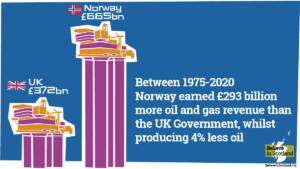 Looking back to 2014, it is obvious that the predictions for the future of the oil and gas sector that were made then were completely wrong.

Since then, the UK Government has failed to tax the sector appropriately. Scotland’s public accounts are almost unchanged by adding a geographical share of oil and gas tax.

The UK has also failed to invest to support Scotland’s transition away from fossil fuels. As we can see from Noway’s example, using tax receipts to create the infrastructure required to turn Scotland into a renewables powerhouse will not discourage investment – instead it will incentivise and encourage it.

The way that the public sector can work effectively with the private sector is by providing market incentives and certainty – that is what private companies need to commit to long-term investment.

Despite the fact that Scotland produces all the renewable electricity it needs very cheaply, bills are soaring. That is because the privatised National Grid is not set up in a way that serves Scotland’s interests. The market incentives that have been put in place benefit first, shareholders and second, the south of England.

The Scottish Government does not control regulation or investment

The Scottish Government has given planning permission for initiatives such as off-shore wind and pumped storage hydro – these are necessary to build a renewable-friendly network that can make Scotlnd self-sufficient in cheap electricity.

But not a trowel will be lifted on the vast majority of these unless the right market incentives are put in place.

The National Grid has already indicated it has no plans to build connectors to enable most of Scotland’s potential off-shore wind sites to access the grid. In Norway, this kind of planning is undertaken by the Government.

Norway backs up its renewables-based grid by pushing water uphill when the wind is blowing – a low carbon and secure way of storing power. Scotland could do this too – but the UK doesnt provide the necessary market incentives. Instead,  the UK’s strategy was to provide market incentives to import expensive power from Europe at times of high demand. That pushes up electricity bills.

Scotland’s elected reprsentatives has no control and very little voice in the UK’s power regulation systems.  As we have seen, depending on Westminster has led to missed opportuntiites in the past and there are more of those in the pipeline.

Scotland should learn the lessons of the past. It needs independence to build a better future.

As Europe speeds the transition to renewables, Scotland risks being left behind