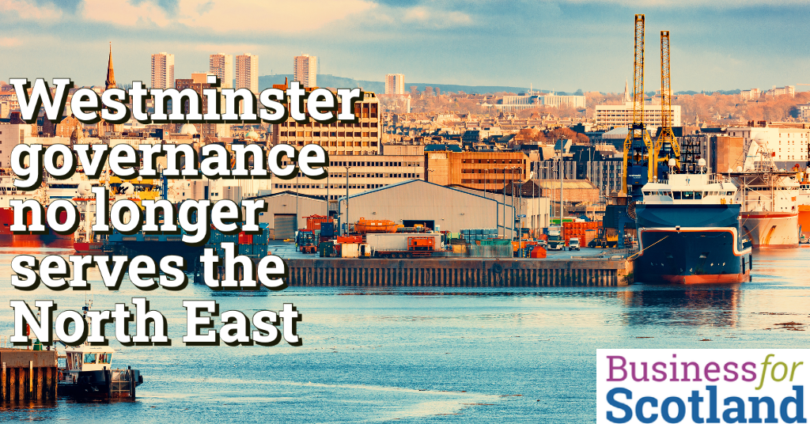 For Aberdeen to become a global hub for renewable energy would take a £17 billion investment – and the money needs to start coming in now.  A new report from Robert Gordon’s University  Energy Transition Institute, the ‘Making the Switch’ review says that “urgent capital investment” is essential – without it the UK will miss its climate targets and Aberdeen will miss the boat. Yet the UK Government is investing only paltry, tiny sums for this important work.

London’s Crossrail underground extension cost £18 billion, was 5 years late and £4 billion over budget – it opens officially this week. There is little concern over the cost of Crossrail – but it offers far less in return.

Turning the North East of Scotland into a renewables hub for the British isles and beyond is vital to the UK’s own energy strategy published last month. The huge volume of renewable electricity that will be required to heat homes and run electric cars as we move away from fossil fuels is supposed to come largely from the Northeast. That will need investment in both the workforce and in the grid.

Funding grid infrastructure in the way that Crossrail was funded – seeing it as a major structural investment that is a public good – would help move the UK rapidly and reliably towards its climate targets.

At this moment, Europe is hurrying towards a fossil-free future with huge investment in the sector, boosted by the need to reduce dependence on Russian gas. EU countries are pouring billions into building renewable capacity – even where they lack Aberdeen’s natural assets. To succeed in this fast-moving space, Aberdeen needs to keep momentum.

Aberdeen harbour is perfectly situated to be the central point of a network harnessing the power of offshore wind. The North-East region could also be a hub for onshore wind, hydrogen and tidal energy, from the region and from the Northern Isles.  But, at the moment, investment is moving far too slowly. A recent investment of just £9 million in hydrogen would have barely paid for a digger for the Crossrail project. And it talks big numbers, but the UK Government has promised just £27 million for the NE Transition Zone.

Upping the game for the North East requires big ambition, major strategic investment and planning. The power to do that rests with the UK Government. The Scottish Government can’t borrow money or create the kind of regulation and market policies that attract private investment. The Scottish government is allocating £80 million to fund a just transition – but that is a fraction of what is needed,

Unfortunately, Westminster targets money for investment in Scotland on the basis of Barnett consequentials of decisions it makes to benefit the south of England. Realising Aberdeen’s potential will take serious, focused investment.

A signal of the UK Government’s lack of ambition came when the North-east’s Acorn project for carbon capture and storage was passed over for funding last year. The Scottish Cluster – comprised of major industrial emitters, as well Acorn’s developers Storegga Geotechnologies, Shell and Harbour Energy – would have been an obvious choice for the technology, given that it is in one of the biggest energy-producing areas in Europe. The fact the UK government chose areas in England instead was surprising – some speculated that the choice was driven more by party politics than the objective case for investment.

If the UK was serious about reducing its carbon emissions in line with its targets it would invest in the grid.

The UK energy strategy suggests that the UK will produce 50GW of offshore wind by 2050 – the majority of that from Scotland. That is a huge leap – currently, the UK produces about 10GW. Much of the extra is supposed to come from the north of Scotland. The recent ScotWind auction licensed 40GW.

Yet the UK’s privatised National Grid plans to connect only about 10 GW of new offshore wind in Scotland to the mainland in the next decade.

When it gets to the mainland, the grid is not geared up to move it south either.  SSEN is proposing to build a subsea connector taking power from Peterhead to the north of England – but even if that gets built it only carry 3-5GW of power.  A connector is being built to bring energy from Shetland to Caithness but there is little capacity to move it south when it gets to the mainland.

Shetland is driving forward innovative tidal power technology including the world’s first baseload tidal power plant in collaboration with Tesla, and the European Commission’s flagship EnFAIT project to demonstrate the profitability of tidal energy. Orkney has the world’s most powerful tidal turbine.  But the Westminster Government is not standing behind, ready to make the infrastructure investment required to harvest the benefit of this – instead it prefers to fund a local transport project on its own doorstep.

Scotland has also fallen behind its neighbours in terms of pumped storage hydro to store renewable electricity – that is an important part of building a smart, renewable-based grid. Scotland doesn’t have one. Regulation of this important area has been in the hands of the UK Government, the Department of Business, Energy and Industrial Strategy and its regulatory body,  Ofgem. They have not set the right market incentives to drive private investment and public investment has not been forthcoming.

Investment in training and workforce planning

Aberdeen is currently home to a large, highly-skilled workforce in the oil ad gas business. Research from RGU shows they have highly transferable skills and they will be needed in the new energy sector. But the danger of the transition losing momentum is that many of them will leave the area and relocate elsewhere in the world, to places that have more ambitions to stay at the heart of energy production.

The Scottish Government is providing some funding for the transition and some of that will go on training and workforce management. The area has a strong education sector, RGU and Aberdeen University both have energy centres and offer training. But the area has been slower than Norway to build and develop the skilled workforce that will be needed for renewable expansion. They also failed to protect workers in the way that Norway has.

Aberdeen has already lost 35,000 jobs in the oil and gas industry – many more than Norway. This is despite the fact that the UK Government took the decision in 2015 to leave the oil and gas sector virtually untaxed – in order, it said, to secure jobs and encourage investment. But there were no rules set – it was left up to shareholders and their board – and this policy didn’t work as they decided instead to take higher dividends.

Oil and gas production brought an era of industrial development to the Northeast. That created a legacy of expertise and innovation which is still there to build on. As a country, Scotland failed to make the most of its natural assets when compared with independent countries like Norway. It left its future in the hands of the UK Government and that did not serve the people well. The writing is on the wall that unless Scotland claims its independence,  the story will be repeated.