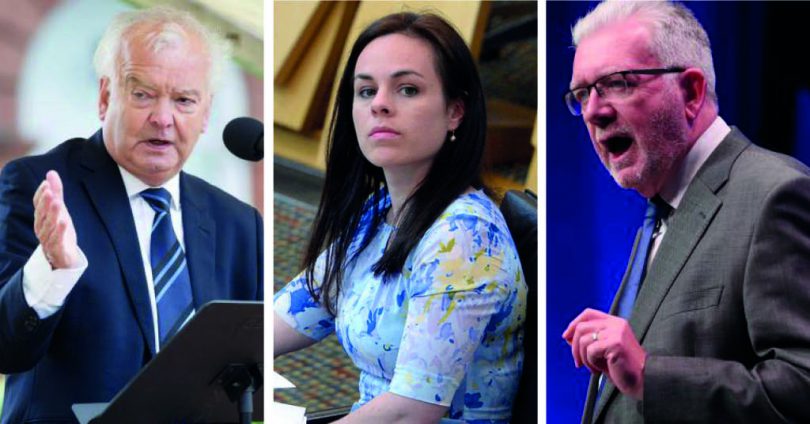 THE dust is settling over yesterday’s publication of GERS figures, which prompted the entirely predictable onslaught of mainstream media headlines suggesting they damage the case for independence.

The fact is that the figures do nothing but boost the case for independence and since their publication key figures have stepped in to show how strong the move to Yes remains. Here are three main arguments:

Scottish finance secretary Kate Forbes said yesterday that she was committed to producing a refreshed economic case for independence to serve as an alternative to GERS.

She said: “I think the GERS figures in and of themselves tell a story with 40% of spending reserved, 70% of taxation reserved. I do not think anyone can defend the status quo right now, so I do think the GERS tell a very important story which contributes to the case for independence.”

The way the GERS figures are consistently twisted by the pro-Union side to undermine the case for independence has long frustrated Yes supporters. The fact that the figures are provided by the Scottish government itself has been a particular bugbear.

The finance secretary said yesterday: “In terms of the alternative case I do think that we need to refresh our economic prospectus as other countries will be doing and so I remain committed to refreshing that economic case taking into account where we find ourselves. ’’

2: The march of history

Those who think that the prospect of independence is receding were yesterday told to think again by one of Scotland’s most eminent historians.

Professor Sir Tom Devine told the audience at an event at the Edinburgh Book Festival that the Union is at greater risk than it has been at any time ”since Prince Charles Edward Stewart led his Jacobite army across the border to England in 1745″.

He said analysis shows younger Scots favour independence and that men and women now back Yes more or less equally. “We don’t know whether those views will change over time as people get older, but that is certainly the position as we speak,” he said.

The historian said the UK government is now refusing a referendum, despite acknowledging Scottish self-determination in 2014, and added: “We have now moved quite dramatically, and very swiftly, from a Union by consent to a Union of enforced law. In my opinion, a Union of that type cannot stand.’’

Professor Devine was joined at the event by Professor Ciaran Martin, a former senior civil servant who played a key role in negotiating the terms of the 2014 independence referendum.

Mr Martin said that any suggestion that the possibility of independence is receding is “short-term political analysis gone mad”.

He said there has been a “sustained, enduring swing” to independence over the course of a decade, while younger Scots back Yes in substantial numbers.

He added: “Now demography is not always destiny and people change their minds, but I think in the historical context these are terrible numbers for the British state.’’

He added that UK “remains at much higher risk of dissolution compared to any other rich, stable Western country that I can think of”.

As a result of the strength of the independence support the pro-union side would resort to unscrupulous tactics, the Yes movement was warned yesterday.

Michael Russell, in charge of the SNP’s independence unit, said yesterday the Westminster regime had moved from incompetence under Theresa May to unpleasantness  and lies under Boris Johnson.

He said he had been told lies  by “not very nice people” during post-Brexit discussions he had with Westminster.

He told an audience at on online event held by The National last night: ‘’I don’t think we could ever do business with them [the Conservative government]. I think we are in a position where the only reasonable and feasible step is independence and we have to find a way of securing that.

“But I also recognise that they will be desperate to stop that happening. So we had better be very determined and absolutely principled and we have got to get it right. Because if we don’t get it right they will take advantage of everything we get wrong.”