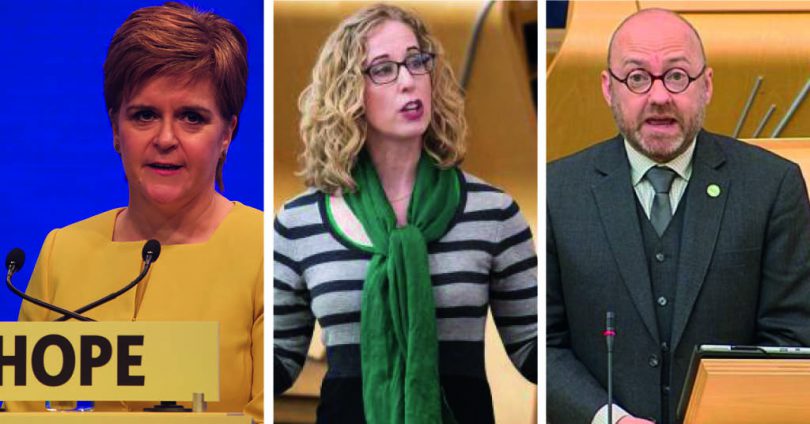 The power sharing deal agreed between SNP and Green negotiators includes a renewed commitment to holding indyref2 within the current parliamentary term and preferably before the end of 2023.

The commitment was included in the details of the deal revealed earlier today and will undoubtedly make the Scottish government’s demand for a second independence vote harder for the UK government to resist.

The SNP’s national executive committee is due to discuss the deal tomorrow and Green party members have a week before voting on the deal on Saturday, August 28.

The First Minister yesterday reiterated her determination to hold the second independence referendum before the end of 2023,  ”Covid permitting”.

“I don’t want that as an end in itself or as some abstract ambition,”  she told a press conference to announce the details of the draft deal. ”I believe Scotland should be independent so that we can better equip ourselves to recover from Covid in the way that I think a majority of people in our country wishes to do towards a greener, fairer Scotland and one that learns the lessons of the past 18 months and more.”

Even before the deal the Scottish government could almost certainly have relied upon the Greens to support any move to hold indyref2. The party, after all, had included a commitment in its election manifesto to support holding the referendum within the current parliamentary term.

But a guaranteed majority government in Holyrood in favour of independence and of a second vote on the matter will certainly increase the pressure on Boris Johnson to sanction the vote just as the former Tory Prime Minister David Cameron sanctioned the first referendum in 2014.

It was instructive to hear the First Minister stress yesterday that if the deal passes there will effectively be a “majority government” that supports a second vote on independence.

The Prime Minister, of course, could continue to stand in the way of indyref2. To say that his actions do not always accord with the rules of logic is an understatement. But to stick to his opposition would be even more of an affront to democracy than the Conservatives’ refusal to recognise the SNP’s mandate.

The positions taken by Johnson and his cabinet colleagues have wavered since May’s election delivered an SNP victory just one seat short of a majority. The Prime Minister’s most consistent argument has been that it is not the time to hold indyref 2 during a pandemic.

First Minister Nicola Sturgeon has agreed but has stuck to her timetable of holding the referendum as early as possible during the current parliamentary term. The recent significant easing of Covid restrictions could certainly create the right conditions for an independence referendum at some point in 2022 or 2023.

I would like to offer that choice [independence] in the first half of this term of our parliament, which is by the end of 2023

The end of 2023 was certainly the cut-off date mentioned by Nicola Sturgeon in an interview she gave earlier this month to the major American current affairs programme All Things Considered on NPR.

The First Minister said: ‘’ When we’re in the recovery, in order to equip ourselves best to recover economically and socially, Scotland should have that choice of becoming an independent country.

“And I would like to offer that choice in the first half of this term of our parliament, which is, you know, by the end of 2023.’’ The caveat remains, however, that Covid must continue to recede.

The Tories have remained opposed to indyref2 but they are not clear on how long they will continue to be so. In January 2020 the Prime Minister rejected Nicola Sturgeon’s demand for a referendum, dragging out that hoary old justification that the 2014 indyref  had been a ‘’once in a generation’’ vote. He said a new vote should be ruled out until 2055.

That same month Douglas Ross, then a Scotland Office Minister. defined a ‘’generation’’ as between 29 and 34 years.

In June Cabinet Secretary Michael Gove said he couldn’t see Boris Johnson backing indyref 2 before 2024. On August 1 Gove entered the fray again, saying the UK government ‘’will not stand in the way’’ of a second referendum ‘’if it is the will of the people’’.

Then, during his recent disastrous trip to Scotland, the Prime Minister said an independence vote was as far from the top of his agenda ‘’as it’s possible to be’’.

So we don’t know when exactly the Tories might support another referendum or what exactly would persuade them to do so … but we do know they don’t want one. And we know that deep down they never will.

The SNP-Green deal would destroy one of the main arguments of the Unionist camp … that the SNP does not preside over a majority government.

We know that’s a vacuous argument but those outside of Scotland who don’t grasp the intricacies of the Scottish parliament voting system might be swayed by it. Especially those who only understand the first past the post system used in the Westminster elections.

They might not have a vote in Scotland but they can influence public opinion on Johnson’s behaviour. An SNP-Green majority government is certainly an expression of the will of the Scottish people. For Boris Johnson to continue to defy it is unsustainable not only for independence supporters but for anyone in Scotland and beyond who believes in democracy.

The First Minister underlined that point yesterday when she said: “This agreement I think … makes it harder and indeed impossible on any democratic basis for a UK government to resist the right of the Scottish people to choose their own future.”