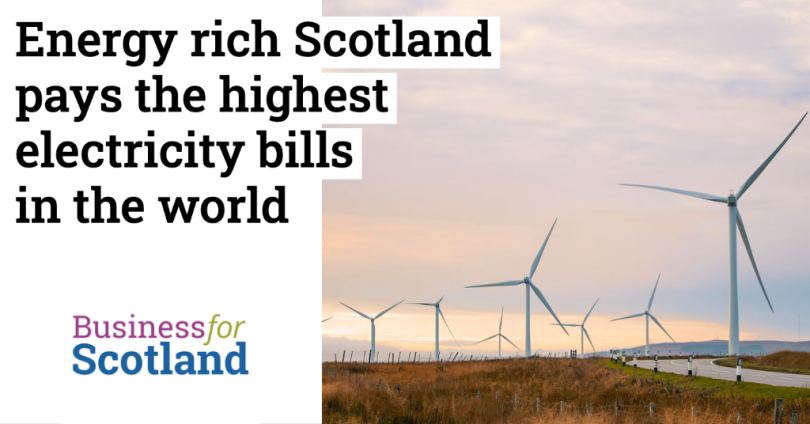 Energy has become a major issue pushing Scotland towards independence. People across Scotland can see that they are being ripped off – they pay the highest electricity bills in the world despite living in an energy-rich country.

“Scotland has the energy – it just needs the power”, MP Stephen Flynn told Westminster last week. He stated that the average bill in Scotland is not £2,500 a year as it is in the UK – it is £3,300 per year. That is despite the fact that Scotland produces six times the amount of gas we consume and that 97.4% of our gross electricity consumption comes from low-cost renewable sources 104.

In answer, PM Rishi Sunak talked about the government’s energy price cap – which is being reduced in April. There was no recognition or acknowledgment of the higher bills Scots face. There was no recognition either of the fact that England’s reliance on Scottish energy exports is increasing (up 67% since 2000), with Scotland exporting 39% of its electricity to England and Northern Ireland in 2019 101.

The growing anger over how Scotland is made to dance to the UK’s tune over energy policy is encouraging many Scots to feel a sense of urgency in demanding and getting independence.

The UK government has made political choices over energy

Under current devolution arrangements, the power to regulate the energy market lies firmly with Westminster. The way they have chosen to do it has been ideologically driven and political. Arms-length bodies like Ofgem are only there to enforce the UK government’s rules. Those rules are bad for Scotland and for the Scottish people – but that doesn’t much matter to the UK government, as it is not elected by the people of Scotland.

The UK government’s choices are not Scotland’s choices:

The way that the UK has managed energy policy punishes Scotland

Scotland’s bills are the highest in the world

Energy Action Scotland (EAS) analysed Scottish energy statistics, following the UK government’s “historic intervention” in the energy market and a pledge that average bills will not rise above £2,500 for the next two years. The analysis, making use of official Scottish energy statistics, shows that across Scotland the typical dual-fuel bill has gone up from £1,375.97 last year to £3,302.45 as of October 1st.

Rural areas are worst hit – as they don’t have access to the gas network which is priced more cheaply. Argyll and Bute face the highest costs of the 32 local authority areas in Scotland with average annual dual-fuel bills soaring from £1,842.06 in April last year to £4,421.49 this month. Residents of Comhairle nan Eilean Siar, the council that covers the Western Isles, face the second highest rises with average prices soaring from £1,754.80 last year to £4,212.57 now. Even in the cheapest area Glasgow City, the least expensive local authority area for bills in Scotland, the average bill will be £2,672.47.

A study released last month looked at Government data on electricity and gas prices from the past five years to analyse the impact of the worsening cost of living crisis and discover which countries have had the biggest year-on-year increase in energy prices. The data, compiled by BOXT, was released UK’s energy price cap was recently raised from 28p to 34p per kWh.

The Republic of Ireland has the second highest electricity cost, paying 18.99p per kWh. That’s 53 per cent more expensive than the average of these 24 countries. However, prices are slightly more affordable when it comes to gas in Ireland, which stands at 5.21p per kWh.

The countries with the highest electricity prices

But KWH is not a guide to what people pay. Most European countries are providing a great deal more help than the UK government is.  For example, the Norwegian government launched a power bill support scheme earlier this year, which covers 80% of the portion of the electricity price that exceeds NOK 0.70 (6p) per kWh. From October to December of 2022, that percentage will jump to 90%.

In Germany, from January, gas and electricity bills will be capped. Government subsidies will allow households and small businesses to pay a lower rate for 80% of the gas they use and 70% of their electricity consumption.

Scotland is literally powerless to do anything about the way that Westminster decides to plan and regulate the UK’s energy sector. The UK government does that in line with political choices that are very different from the ones Scots make time after time at the ballot box. It will be very difficult for Scotland to rebuild the kind of capacity it lost through privatistion in the Thatcher years  – and it is not something that can realistically be tackled without independence.

Anger over the way Scotland’s energy potential is being squandered is fueling a drive towards independence. People can see how Norway benefited from oil and gas and where it is now, economically, compared to Scotland. Scotland was fooled once – it doesn’t want to be fooled twice.

Scotland should operate as its own node within the UK. The Scottish government should be able to control and regulate the energy market, including the national grid. It should be able to set the right market incentives for the kind of technologies Scotland needs and which will help the country to achieve ambitious net-zero targets.

The only way to achieve those powers is through independence.