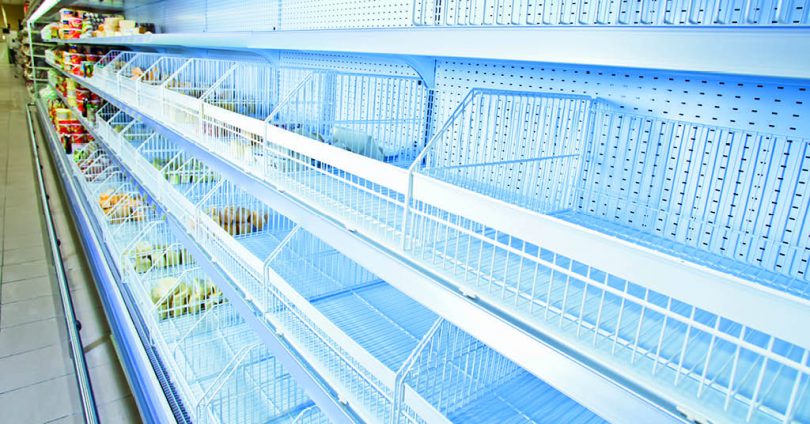 Brexit has emerged as the main cause of deepening food shortages in supermarkets and restaurants and predicted Christmas chaos,  leaving attempts to divert blame on to the Covid 19 ‘pingdemic’ looking increasingly threadbare.

The news comes as lobby groups for the retail and transport industries have jointly written to UK Business Secretary Kwasi Kwarteng warning the impact on supply chains is getting worse.

The food shortages have affected shops and restaurants all over the UK. A number of Nando’s outlets, including some in Scotland, have had to close because the company cannot get enough chicken.

Industry figures have placed the bulk of the blame for the problems on Brexit. They say the industry is struggling to cope with production workers going back home to the EU and a drastic shortage of lorry drivers able to come to the UK.

Nick Allen, chief executive at the British Meat Processors Association, said the UK’s meat production workforce is down by up to 20 per cent and the sector is struggling to get many product lines out to supermarkets and restaurants.

He added: “The supply problems are coming from the underlying labour problems happening since Brexit … It’s certainly Brexit-related, but it’s also the immigration decisions our politicians are making since Brexit.

The labour crisis is a Brexit issue

“Nando’s is the tip of the iceberg. I think we’re going to see more and more [closures]. Some people are still trying to open up their restaurants – but they’re struggling to get staff and struggling for deliveries.”

Richard Griffiths, chief executive of the British Poultry Council, also blamed Brexit for worker shortages in poultry production and the resulting impact on supply. He said last week: “The labour crisis is a Brexit issue.”

Nic Wood, owner of the Signature Group of restaurants which operates 21 venues in Edinburgh and Glasgow, said his business can’t get enough staff to allow all restaurants to open to full capacity.

Mr Wood told reporters that “lack of staff and supply chain complications” were causing the problems and added: “We need a visa scheme to plug the employment void that has appeared since Brexit.”

Claims that the supply crisis was mainly down to the recent Covid “pingdemic”  – caused by the test and trace system which forced some staff into self-isolation – have been dismissed by one of Britain’s largest poultry producers. A spokesperson for Avara Foods said last week: “Our concern is recruitment and filling vacancies when the UK workforce has been severely depleted as a result of Brexit.”

And Professor Tim Lang, from the Centre for Food Policy at City University of London, told BBC Radio 4’s World at One last week that the shortages were a consequence of Brexit.

He added: “We’re now seeing Brexit beginning to work. We’re seeing here the realities of people voting to leave the EU on which we depended for all sorts of migrant labour in the food sector,” he said. “Whether it’s sandwiches, chicken, retail or the hospitality sector – we’re seeing stresses and strains everywhere.”

Logistic and retail trade bodies had urged the government to grant temporary work visas to heavy good vehicle drivers from the EU to help ease the shortage. But the UK government yesterday refused to act on the plea.

The Food and Drink Federation (FDA) has warned that Brexit could cause more supply problems in October when new border controls will be introduced for the UK that will apply to imports from the EU.

And some industry experts have predicted shortages of toys, clothes, electrical goods and even turkeys this Christmas.