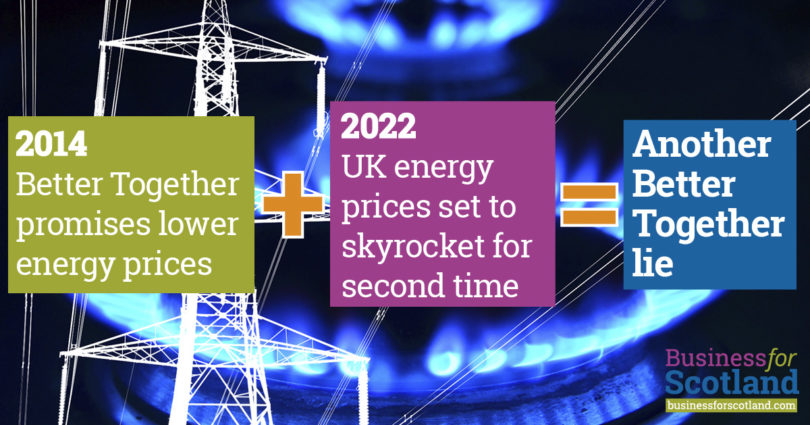 It is not a promise that has stood the test of time. The huge price hikes Scottish consumers are now experiencing are historic. They represent a cash transfer from billpayers to the shareholders of energy companies. Price rises in the UK are much higher than any other country in the G20 except Germany, and Germany has much stronger mitigation in place to help households.

The price increases don’t impact evenly. Pensioners living on the state pension will be unable to find extra money. The UK basic state pension, which is paid to most pensioners is the lowest in the developed world, – it is about £7,376.20 a year for many older pensioners -. £9,627 is the New State pension. The price rises mean that energy costs will now swallow up large proportion of that.  This April, benefits and the state pension were boosted by just 3.1 percent. The state pension was previously protected by the “triple lock”, which links pension payments to rise in line with whichever is highest out of inflation, the average wage increase or a flat 2.5 percent. This safeguard was included in the Conservative Governments Manifesto but that promise was also broken as inflation rose faster than expected.

It means that relative to other countries the UK state pension is sliding fast – most developed countries protect pensioners automatically from inflation. Age UK’s analysis of official figures shows that by the end of the year more than two million older households will be unable to cover their daily essential spending on housing costs, council tax, utility bills, food and drink, home communications (including internet) and transport.

Many will become destitute – unable to secure the daily necessities of life. The Joseph Rowntree Foundation says:

“It’s not right that anyone should have to face destitution. Destitution means going without the essentials we all need to eat, stay warm and dry, and keep clean. The UK should be a country where everyone has the chance of a healthy, decent, and secure life regardless of who they are and where they live.”

Age Scotland calculates that 1 in 3 older households in Scotland already living in fuel poverty, and many more are hovering on the cusp. Age Scotland’s Chief Executive Brian Sloan said:

“This projected increase is jaw-dropping and would be nothing short of catastrophic for older people. Not to mention the fact it is expected to hit at the worst possible time of year as we head into the colder, darker months.

“The past few months have already been extremely challenging, particularly for those on low and fixed incomes, with 94% of older people already worried about their energy bills back in March and many sacrificing all but the most essential purchases to keep their lights and heating on.”

Many others will be in the same boat. Families with several children living in larger houses will have to pay more than the £2,800 a year estimate, which is based on average usage for 2.4 people in a two-bedroom house.

People on pre-payment meters also have to pay more. If they run out of money, they will lose power – but even when not using any power at all they will continue to accrue debt because of the high standing charges. Research from Ideal Economics shows the poorest 10 percent will now spend almost a third of their energy payments just paying for standing charges – and that will increase in the autumn.

Scots have to pay more in standing charges than most people in England. Scots pay 48p or 49p per day for standing charges – in London consumers will pay just 31p per day. That is more than 50% less.

Part of the hike in standing order charges – an average of £68 per household – will go to fill the hole left by the collapse of energy firms. Ofgem presided over a collapse of 29 energy suppliers in the last year – millions of pounds in consumer credit vanished when they went bust. A House of Commons Energy Committee heard that the decision to open the energy market up to people without any expertise or backing in the sector was essentially political. The dubious decision to encourage cowboys into the market which was made by a UK Government that Scotland didn’t vote for in the name of free market ideology.

People in rural Scotland will also be impacted. Many are not connected to the gas supply and electricity is charged at a higher rate to heat homes. Some use heating oil which is even more expensive.

Yet Scotland produces enough renewable electricity to supply all of its own power. With expensive gas-generated power stations out of the mix, and greater tools in the way of regulation and market incentives, an independent Scotland could do better than the UK is doing. Scotland also possesses roughly a 90% geographic share of the UK”s lucrative oil and gas industry. The way the UK Government has chosen to tax that since 2014 is very unusual – it has the effect of making Scotland seem poorer and it doesn’t mean there is more investment. Instead, shareholders and their board distribute their profits in higher dividends and share buybacks.

An independent Scotland would be able to regulate the energy market differently. They would be able to tax the oil and gas sector in the way most producing countries do it. Having resisted a windfall tax on the extraordinary profits of energy companies up till now, there is a growing expectation that the Conservative Government is about to raise upwards of three billion through a windfall tax which will be used to alleviate some energy cost rises – a large percentage of that would go a lot further in an independent Scotland.

A windfall tax is important for dealing with the short-term pain people are feeling, but it won’t alleviate the situation in the long term, That has been caused in large part by mismanagement, missed opportunities and ideological choices, that are out of line with Scotland’s priorities. An independent Scotland can pursue a more rational and consistent tax and regulation policy, designed to support investment in Scotland’s renewable future.