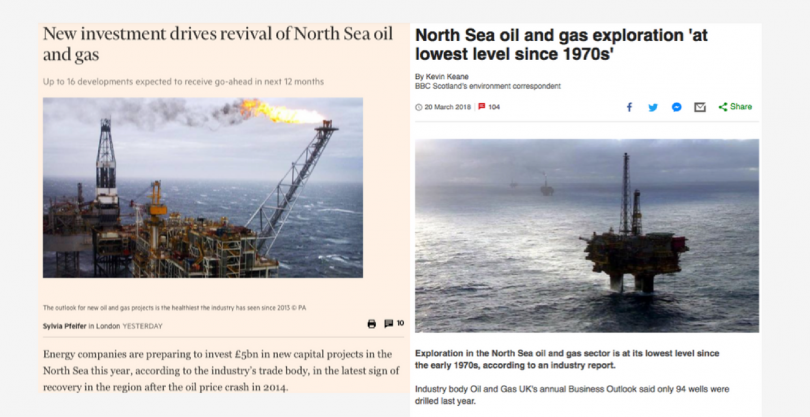 Take a look at the two images above. Both headlines of articles on the exact same piece of news, published on the same day.

On first glance at the BBC Scotland headline and introduction we thought it was unexpected bad news for the oil sector, but it turns out to be a glass half empty versus glass ‘full to overflowing’ situation.

BBC Scotland, whose accepted framing of all oil and gas news seems to be ‘present it as bad news if at all possible’, paints picture of woe.  However, viewed through the hard-nosed, business reporting of the Financial Times, Scotland’s oil sector is fit for a revival. So who is telling the truth?

Here is how both media outlets set up the story:

Having read the report we can confirm that less wells were drilled last year than in previous years, but quoting from the BBC report:  “Although a small number of wells were drilled, the amount of oil discovered was its highest since 2008 at 350 million barrels”.

In fact, production in 2018 is expected to increase by 5 per cent, which will make it 20 per cent higher than five years ago.

This is great news for the oil companies. Every time you drill a well you have a fixed cost and if you get a higher volume of oil from fewer wells then your cost per barrel drops significantly. Finding more oil from less wells cuts the fixed cost contribution per barrel and BP have confirmed that oil extraction costs in some of its newer and larger fields is a low as $14 a barrel and that some will drop to $12 in the next year.

There is some not so good news – to quote the CEO of UK oil and Gas – “We must recognise that many areas of the supply chain are still struggling with the impact of the downturn and have yet to benefit from any upturn in activity”.  When the oil price crashed the oil companies cut jobs and supplier costs.  Arguably therefor the worst hit sector of the industry was those companies further down the supply chain.  The UK Government cut petroleum revenue tax to zero to help the big multinationals but gave no tax relief at all to the often Scottish/rUK owned smaller supply chain companies, who therefore have borne the brunt of the cost cutting.

BBC Scotland do, at times, seem to be editorially infected with what used to be known and the Scottish cringe.  I think it’s time for them to be more self aware and ask themselves if there are two sides to every story about Scotland’s economy, and if every day needs to be a bad news day.

If you want to know more about why UK tax revenues from oil and gas are underperforming you might be interested in this: Why UK’s oil and gas revenues are dwarfed by Norway’s