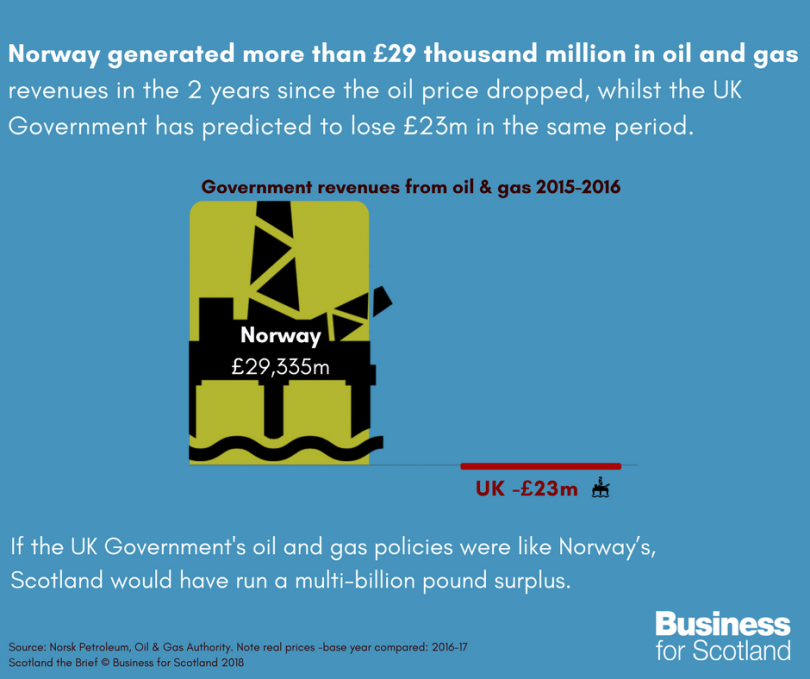 Point 1: Norway’s oil and gas industry is state owned, whilst the UK’s is privatised.

Unlike the UK’s oil and gas sector, Norway’s is owned by the Norwegian Government and therefore a significant proportion of its oil and gas revenues is generated for the people of Norway and used to invest and boosting welfare provision.

Oil and gas revenues are transferred into a sovereign oil fund and each year, therefore ensuring that the revenues are managed with a long-term goal by making sure Norway’s future generations will benefit from the revenues as well.

Ingrid Rasmussen Deputy Director General of the Norwegian Royal Ministry of Finance wrote to us to explain:

The Norwegian petroleum policy aims at ensuring a reasonable public share of the resource rent accruing from petroleum production, and at the same time extract profitable resources.

Whilst Norway’s oil and gas sector is state owned, the UK’s is privatised. This means that society only benefits from the oil and gas revenues through taxation. Whilst the UK is recorded to have one of the lowest corporation taxes in the world, the UK Government decreased the tax rate for oil and gas companies when the price of oil fell.

Point 2: The UK Government has decreased the tax rate charged to oil and gas companies for extraction.

The price of oil dropped significantly in the last two years. In response to falling oil prices, the UK Government decided to cut Petroleum Revenues Tax (PRT) in 2015 from 50% to 35%, and in 2016 it was further reduced to 0%. The supplementary charge was also cut from 62% to 50% to 10% during the same time. This meant that the UK earned less in tax revenue from its oil and gas industry. Despite oil prices rising again to around $70.00 and and increased production and cost cutting helping to lower UK production costs to around $14.00 per barrel, the zero PRT rate means that revenues will not increase in line with oil company profits. This also means that the illustrative Scottish deficit figure will not reduce as taxation revenues are negligible.

Whilst in Norway, the Norwegian Government maintained taxation levels on oil and gas at 78%.  It also drew on its oil revenue-driven sovereign wealth fund to assist workers who lost their jobs, whilst the UK subsidised global oil companies.

Point 3: The UK Government pays oil companies to extract oil – rather than getting paid by firms who are extracting these valuable UK resources.

The UK Government has introduced a tax system for oil and gas which effectively now pays large oil companies to extract oil, rather than one where the oil companies pay extraction taxes to the UK.

In the 24 countries where Shell operates, in the two years (2015 and 2016) reported since the price dropped, all countries except the UK made Shell pay taxes on oil and gas extraction. During that period the UK paid Shell £179m in tax rebates, whilst Shell paid £4.589 billion to Norway and even more to other countries. 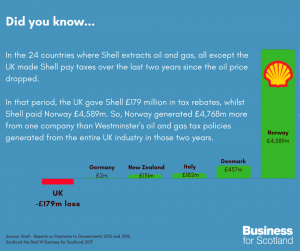 So, Norway generated £4,768m more from one company than Westminster’s oil and gas tax policies generated from the entire UK industry in those two years.

There is a similar scenario for BP. UK taxpayers paid BP £340 million in tax rebates in 2015 and 2016. Other countries such as Azerbaijan received up to £10,048 million in taxes from BP. 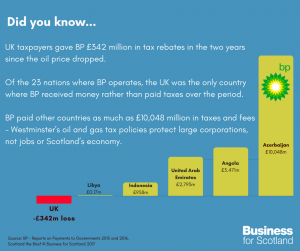 Was the taxation cut (that reduced North Sea revenues) to zero required to save the oil companies?

This means that whilst making thousands of workers redundant and hardly paying any tax on the oil and gas production, Shell made significant profits.

Compared to the UK Government, the Norwegian Government’s approach to oil and gas resource governance has been highly competent.

They have avoided the need to cut Government spending in the face of falling oil prices, having protected their budget from oil price volatility through investing in their sovereign wealth fund. They are also focused on channeling oil revenues to the benefit of the public good rather than offering large tax breaks to oil companies.

Business for Scotland calls on the Scottish Government to organise a conference on the North Sea to bring together best practices from Norway and the UK in order to plan how we utilise Aberdeen and the North East’s expertise and transform that economic area into a global centre of excellence in renewable energy that will never run out.

Read more about this topic: