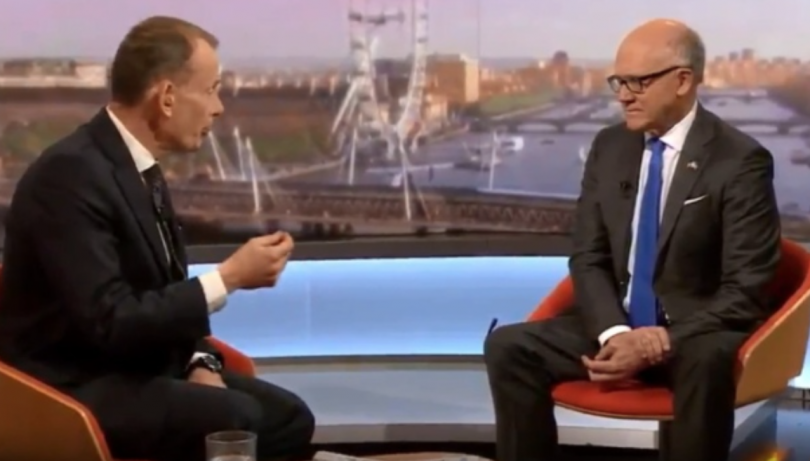 Donald Trump on his state visit to the UK confirmed that the NHS should be “on the table” as part of a post-Brexit UK/USA trade deal. The backlash against that statement has now led him to backtrack but the whole point of the UK Government taking the Scottish Government to the Supreme Court to intercept powers over procurement was purely to allow post-Brexit trade deals to happen.

Last week in a quite incredible exchange on the Andrew Marr show, Marr completely missed the massive problem arising from the US Ambassador to the UK’s statement on the NHS.  Having asked if US private sector access to the NHS would need to be part of a post-Brexit trade deal, Marr missed or didn’t understand the crucial implications for devolution contained in the answer. That is that the UK Government doesn’t currently have the ability to put access to the NHS on the negotiating table.

The US Ambassador to the UK, Woody Johnson, confirmed that any post-Brexit trade deal with the US will have to include access to all NHS services contacts for US healthcare and pharmaceutical companies.

This is the key part of the conversation:

Marr – Do you feel that healthcare has to be part of the deal?
Johnson – I think that probably the entire economy, all things that are traded, would be on the table.
Marr – And that includes healthcare?
Johnson – I would think so.

The Brexit Party victory in the EU elections and it’s lead in seat projections (if there were a General Election (GE) tomorrow) make not only cancelling Brexit very unlikely but also make a No Deal Brexit a highly likely outcome. Any new Conservative PM would have to force Brexit through or be destroyed by Nigel Farage’s Brexit Party in a GE.  Were Farage to become PM (current polling has Brexit as the largest party) then it’s a no deal Brexit for sure.

Brexiteers claim they want to leave the EU as it puts unfair restrictions on the UK’s ability to do trade deals, but the USA, their dream trade deal partner, would put even more restrictions on the UK.  And, we don’t get to elect representatives to the US Congress or Senate as we do to the European Union.  America has a track record on this – Canada, the USA’s largest supplier of imported oil, is restricted in its US trade deal from signing a trade deal with China. Add to this the irony that just as the hard Brexiteers are enthusing about trading by World Trade Organisation rules after a no deal Brexit, Trump is progressing trade tariffs that break those very rules and undermine the WTO.

In short, any future post-Brexit trade deal with the US would have to include access to NHS contracts for their companies.  This means that the US would be asking the UK to sign a trade deal which would be subject to a veto from the Scottish, Northern Irish and Welsh devolved parliaments.  NHS Scotland was from inception a separate body from the English NHS and it became the responsibility of the Scottish Parliament in 1999. The UK Government cannot simply include the NHS in a trade deal without either getting the Scottish, Welsh and Northern Irish Parliaments/Assemblies to vote for a trade deal that would allow a massive step up in the privatisation of the NHS in their countries – they won’t under any circumstances.

This means that to do a trade deal with the US, the UK Government would have to legislate to take control over the NHS to Westminster. It has already been to the Supreme Court to intercept powers coming back to Scotland from the EU for trade deal purposes.

So any post-Brexit UK Government of any party has a straight choice between an unsolvable constitutional crises and a full-blown trade crises, because not only would the devolved parliaments not accept NHS privatisation, Scotland as a nation would see such a move as the straw that broke the UK’s back.

It isn’t as if this situation wasn’t predicted – in January 2018 I gave evidence to the Westminster Brexit Trade Deal Committee where I explained to a rather confused set of unionist Westminster MPs that “Brexit is incompatible with devolution”.  It is becoming clearer by the day that Brexit is also completely incompatible with the maintaining the Union.

You may also like: UK state pension worst in developed world and has the highest retirement age