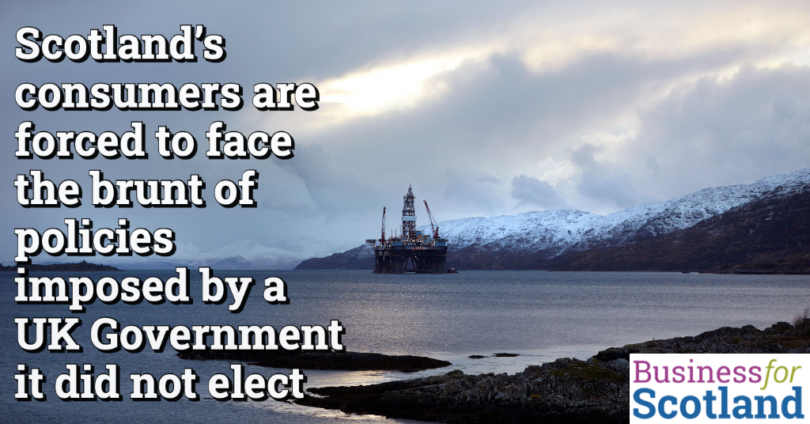 Scotland is experiencing a huge cash transfer from energy consumers directly to the shareholders of oil and gas companies. Scotland produces all the energy it needs and more – yet it gets no credit in the bills, unlike independent energy-rich countries. The “exceptional” profit energy producers are making will be largely spent on shareholder dividends and share buybacks.

The obvious thing to do is –  as many European countries have – is impose a windfall tax. But with an independence referendum looming the Unionist campaign’s only chance of success is the false claim that Scotland is an economic basket case and could not survive as an independent country – to make this claim semi-believable the UK Government has essentially slashed taxes on North Sea oil production to create a false deficit in GERS (Scottland’s accounts as part of the UK). A windfall tax would increase Scotland’s national revenue and massively damage that argument.

A windfall tax imposed by Geroge Osborne in 2011 did significantly boost Scotland’s tax revenues. The UK Government has learned from that. It is unwilling to impose a windfall tax with another independence referendum planned for 2023.

The way in which the UK government currently taxes North Sea energy production is complex. It allows a lot of income to be sheltered from tax. Oil and gas from the North Sea ends up being taxed at a uniquely light rate. ‘GERS” – Scotland’s nominal accounts – show almost no benefit from North Sea energy. The UK Gov gets much, much more revenue at the petrol pump – which doesn’t affect GERS.

Imposing a windfall tax would make it clear that Scotland has huge potential to benefit from its huge energy resources. The UK Government has no intention of doing that, despite the massive profits energy companies are making from billpayers.

BP revealed its highest first-quarter earnings in a decade on Tuesday. Shell revealed profits above £7 bn for the quarter. Other operators in the field are also benefiting.

BP declared an ​​£18 billion investment in the UK in the next decade – but that is not new investment, largely a restatement of existing commitments. It represents a small proportion of profits, most of which will go to shareholders or be used to buy back shares. BP maintained the quarterly dividend of 5c on each of its 19 billion shares, and committed to buying back $2.5bn of shares in the second quarter after completing buybacks of $1.6bn in the first quarter of 2022.  This was despite the paper write-down of the value of its Russian holdings to zero.

TotalEnergies, one of the biggest companies in the North Sea announced quarterly net income of $4.9bn, up nearly 50 percent on the same period a year earlier, despite writing down investments in Russia to zero as BP and Shell have done.  The French group said last week it would buy back up to $3bn of its shares and increase dividends.

Meanwhile, Italy has raised its windfall tax on profits in the energy industry to 25% from 10% while approving a 14 billion-euro aid package to help companies and consumers hit by surging costs. (Italian energy giant Eni is involved in North Sea production.) France, Germany and Spain have imposed a windfall tax to protect households.

Most of the UK’s imported gas comes from Norway and Norway’s state-owned company Eqinor, formerly known as Statoil, one of the biggest operators in the North Sea, announced quarterly profits of $18bn. A chunk of UK billpayer’s cash is heading for Norway.

“Norway is making huge profits from energy poverty in Europe at the moment,” says Aled Dilwyn Fisher, from the NGO Friends of the Earth Norway. All profits made from oil and gas extraction in Norway are subject to a 78 percent windfall tax, which goes to the Norwegian sovereign wealth fund, which now holds $1.3trn in assets.

Scotland is forced to bear the brutal brunt of policies imposed by a UK Government it did not elect.

An independent Scotland would be more than self-sufficient in energy, with the potential to become a huge exporter of renewable electricity. Despite the fact that it is Scotland’s natural resources that are being exploited, Scottish consumers are being asked to pay astronomical bills. That money is being transferred to energy companies’ shareholders.

When it comes to tax, there is dirty work going on from a UK Government set on manipulating Scotland’s finances.  Only an independent Scotland would have the power to change this.

As Europe speeds the transition to renewables, Scotland risks being left behind