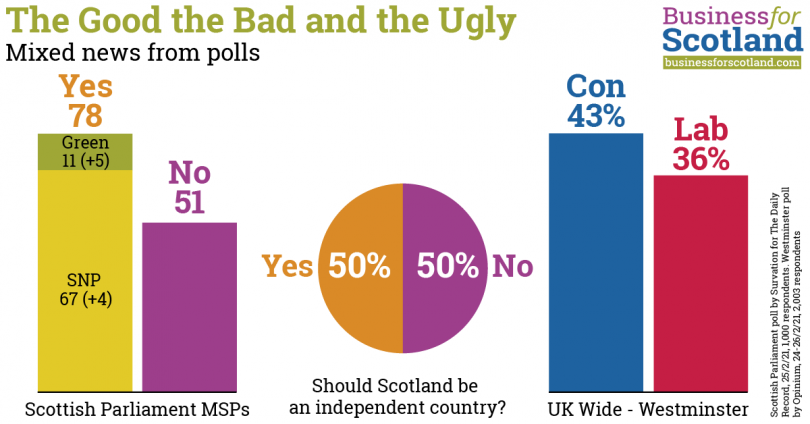 This week’s Sunday Mail – the Daily Record’s Sunday edition and not to be confused with the uber-unionist Mail on Sunday – published a poll showing Yes and No tied on 50/50. Much was made of this, as it was the first poll in 22 not to show a Yes lead.

This is clearly disappointing for the Yes movement but was frankly predictable.  Survation has recently polled Yes support at lower levels than previously and last month found support for independence at 52%.

A 2% drop to coincide with the Salmond hearings and other internal squabbling within the leading independence party is no disaster. Two per cent is within the margin of error for polls of this size and, although it seems likely under the circumstances to be a real drop in support, if all the other January polls were to drop 2% Yes would still be in the lead on average by 52% to 48%. I do expect a No lead to be found in the next week or so, although a great deal depends on how the public perceives the First Minister’s evidence to the inquiry.

Another poll, this time by Opinium for the Observer reported by The Guardian on Saturday,  found that the Conservatives were opening up a 7 point lead on Labour. Were there a UK general election tomorrow 43% would vote to return a Boris Johnson government and only 36% would vote to have Sir Keir Starmer as PM. To be clear, the Conservative majority government was elected on a vote share of 43.6% in December 2019. Despite being recognised as the worst UK Prime Minister of the modern era, despite terrible handling from start to finish of the health crises, despite wholesale corruption and illegal PPE procurement and minister code breaches – the Conservatives are pulling away from Labour.

Conservative dominance of UK politics may not be seen by many in Scotland as a good thing but it does rather put into perspective any promises made to Scotland by Labour, who are in no position to promise anything. Federalism (which is unworkable) is also so unpopular in England that if it is suggested forcibly by Labour will cost them votes. The Conservatives and Labour will go backwards in May’s Scottish elections and many Labour voters will see the choice of independence in a referendum as a choice between a progressive independent Scotland or being government by radically more right-wing Tory governments of the future. When the referendum is called Labour will be in no position to mount a unionist campaign and save the union as they did last time. as their own voters will not be hopeful of or excited by a Starmer government.

Survation for the Daily Record today provides the good news that May’s Scottish election still looks certain to return a pro-independence majority, with the SNP predicted to have a majority of 5 (over all others) on 67 MSPs. The Green Party are almost certain to add another 10 or 11 MSPs, giving a Yes majority of 27.

That means that there will be a referendum on Scottish independence in the early term of the next parliament.

No one can be completely happy or completely despondent about this series of polls. Unionist parties must be delighted that the SNP are in self-destruct mode when that used to be the key skill of the unionist parties. However they must also be wondering what on earth they need to do to establish a No vote lead. The inquiry will be over soon and the FM’s evidence will likely calm the storm but leave both protagonists – the Scottish Government and Alex Salmond – damaged by the affair.

Labour it seems can do nothing to derail the Tory juggernaut from the top of the polls in England and that looks likely to continue as Starmer’s honeymoon period is now over. That changes everything from 2014,  when some within the Labour movement in Scotland gave Labour one last chance to deliver on its promises, not just of more powers but of a Labour government. With the Tories in command and genuine attacks on devolution underway all promises of federalism will do is make Labour look hopelessly out of touch with reality.

The fall in independence support is not terminal, it’s situational. Once the Yes movement starts to pull together after the announcement of a second referendum either in autumn 2021 or spring 2022 (dependent on the health crisis) and a new economic and social case for independence based on Wellbeing and building back better after the health crises and Brexit is presented to the Scottish people that fall can easily be reversed and returned to a healthy majority.