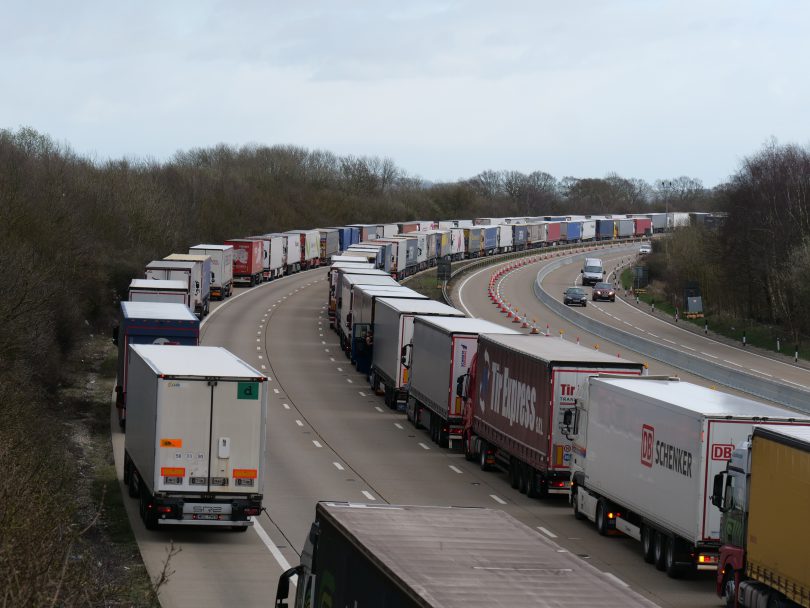 A recruitment drive has failed to recruit up to 30,000 customs agents needed to tackle catastrophic delays and confusion at border ports.

Businesses have been pushed to the brink of bankruptcy as delays and red tape have stopped products getting to EU markets on time. They have also seen 40% of trucks cross the Channel with empty containers and have cost the UK government millions of pounds in lost trade.

Overall EU exports from Scotland were 63% down, more than 20% worse than the UK figure

January saw the worst collapse of trade with the EU since comparable records began 20 years ago. British exports fell by almost 41% as extra paperwork delayed lorries getting to markets. British goods exports to the EU fell by £5.6bn, while imports fell by almost 30%, or £6.6bn.

The effects on Scotland were particularly grim. January figures released by the Office for National Statistics show a staggering drop of 83% in our biggest food export, fish and shellfish. Meat exports were down by 59%,  dairy products were 50% down. Overall EU exports from Scotland were 63% down, more than 20% worse than the UK figure. 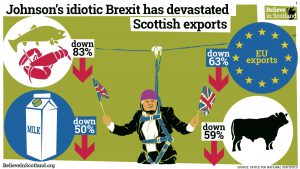 James Withers, the chief executive of Scotland Food and Drink, said the “grim” figures could not be sugar coated. He dismissed UK government attempts to blame the Covid-19 pandemic for the fall. He said: “We know Covid has reduced demand and there was stockpiling of products before the end of the year. However, right at the heart of this trade collapse is Brexit and the creation of huge, new, non-tariff trade barriers with our biggest export market.

“This simply can’t be talked away as a Covid issue. The crash in UK trade has not been seen in sales to non-EU markets, despite it being a global pandemic. Also, we did not see a fall like this at any point during the first lockdown.”

He added: “The financial damage to our seafood industry is particularly stark. A fall of over 80% in what is the UK’s biggest food export has brought a crisis to a sector reeling from the worst trading year in memory. You can’t stockpile fresh fish and shellfish, so that has not been a factor at all in these figures.

“This has to act as a catalyst to open negotiations with the EU to recognise aligned food standards and reduce the red tape burden. Without that, these trade figures will never recover to anything like the levels before.”

In a breathtaking understatement Scottish Secretary Alister Jack admitted to the Conservative Party Conference at the weekend that “not everything has been smooth” as Scotland deals with the impact of Brexit. He added: “An undertaking on this scale was always going to have snags and the seafood industry has suffered.’’ There was little in his speech that suggested he had grasped the scale of the problems Brexit in causing Scotland.

Lord Frost, the cabinet minister responsible for Britain’s relationship with the EU, said there was a “unique combination of factors” that meant it was “inevitable that we would see some unusual figures this January”. But his claim that effects were now “starting to unwind” and overall freight volumes had been “back to their normal levels for over a month now” has been challenged.

Rod McKenzie, the Road Haulage Association head of public affairs, said the recruitment of customs agents needed to rise by around 30,000 to nearer 50,000 to cope with the extra regulations. “Judging by our own experience of customs agents, they are swamped with calls and turning away business, which is ridiculous when we have had four years to sort this out.”

Some economists have forecast that delays at UK borders will drag on growth for at least the rest of the year while the Treasury’s official economic forecaster, the Office for Budget Responsibility, has said the Brexit ‘’deal’’  signed on Christmas Eve would knock four percentage points off UK growth over the longer term.