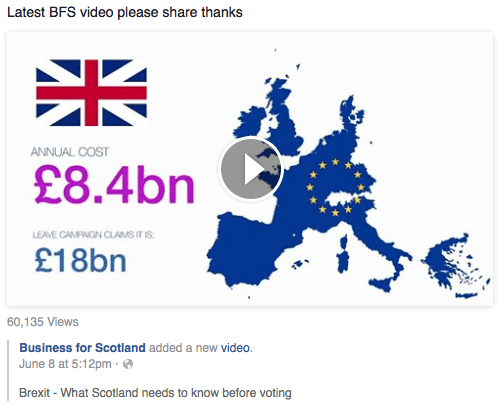 Business for Scotland released a video last week based on our research which demonstrated that for every pound Scotland gives to the EU in the form of membership fees, we get £20 back in government revenue. In under a week it has generated over 65,000 views across multiple platforms and one rather bizarre comment. In Last Thursday’s Scottish Sun an official but anonymous spokesperson for Vote Leave accused me of scaremongering and said “This is yet another lie from David Cameron’s ‘project fear’ campaign which now seems to be saying anything to scare voters into backing Remain”.  There are two problems with this form of attack, firstly that BfS is not on the same side as David Cameron, we are on the side of Scotland – he isn’t, he is just co-incidnetly campaigning for the same result (a broken clock is right twice a day) but for totally different reasons and BfS has not and will not share a platform with any prominent Better Together campaigners during this campaign. Secondly the video contains absolutely no scaremongering and even admits that post-Brexit trade deals can be done that would avoid tariffs and most of the economic damage of a Brexit and the video is completely positive on the overall impact of the EU on Scotland.

However, when you you take all the EU grants and the rebates out of Scotland’s population share of the UK’s EU membership fee it costs Scotland about £97 million a year (the same it costs people each year for being put on hold when they call HMRC). That £97m gives us tariff-free access to the common market contributing about £2.2bn in much needed Scottish government revenue.  A Norway/EFTA style trade deal post Brexit would be fairly easy to do in the two year deadline following, but such a deal would have similar costs to EU membership and still contain EU immigration rights and other EU regulations. So although a Norway-style deal would work for an independent Scotland it does nothing to placate the key immigration, sovereignty and EU regulations worries that actually motivate the Brexit campaigners, potentially making the whole EU referendum a pointless exercise.

The Vote Leave spokesperson then goes on to say: “The facts are simple. The UK sends £350m a week to Brussels. Scotland’s share of that is £30m”. Hold on, they call me a liar and then quote a figure as fact that is wrong by ten thousand million pounds a year!

Not only that, they do it in an article where The Scottish Sun (as did The National) have laid out our research in black and white which starkly disproves their phoney claims. To start with, it’s an undeniable fact that the UK never pays the £350m a week or £18bn a year as several other EU member nations pay approximately £4.9bn of our membership fees direct to the EU on our behalf. They do this to encourage the UK to stay a member and some of the contributors such as Greece and Portugal can’t really afford the £125m a year they pay on our behalf. A recent example of nations which pay almost £5bn of our membership for the UK include France (£1.5bn), Italy (£1.2bn), Spain (£700m), Belgium and Germany (£250m each) and Ireland and Poland (£125m each). This is known as the rebate (obviously a misnomer) the UK then receives back £4.5bn in EU grants, less those EU grants The UK’s cost of membership is £8.4bn. So the Vote Leave claims are pure fantasy. We can see that Scotland’s membership does not cost Scotland £30m a week (as claimed by Vote Leave) but only £1.86m per week but for that we get back around £40m a week in directly-related government revenues – deal or no deal?

Those Scottish Government revenues that can only be protected by a trade deal that wouldn’t save us any money because all trade deals like Norway’s that give access to the Common Market include payment of trade of a trade levy (Norway pays 95 per cent of the UK’s per head membership fee) but has no MEPs or Council members etc so we would still have to pay but get no say.

How can the Leave campaign be taken seriously by anyone, how can they be taking the lead in England? The answer is that David Cameron’s Remain campaign is an embarrassment of scaremongering and it is backfiring. Half the press in England are on the side of Leave so the scaremongering is being called out, unlike in 2014, and to be frank the English people area also possibly more confident than Scots by nature, so the scaremongering doesn’t (yet) seem to be having the same impact on them as it did in our referendum. A journalist asked if my criticising the Remain campaign’s negativity inadvertently helps Vote Leave but how can I, in all conscience, not distance myself from idiotic scaremongering on pensions not being paid or hundreds of thousands of Scottish jobs being lost if we Brexit, or that house prices will go down, when firstly it all depends on the post Brexit trade deal and secondly Scottish voters have heard it all before, don’t believe a word and want a truthful “warts and all” analysis of the EU.

The EU does have its faults but most of those are not alleviated by leaving – take fishing for example, yes Scottish fishermen have a huge axe to grind with the EU but would leaving mean no EU boats fishing Scottish waters? Post-Brexit this would be one of the first things the EU would ask for in a trade deal and so one of the biggest negotiating cards Westminster would have to play is maintaining access to Scottish waters for the EU fishing fleet. Will Westminster change its spots and after generations of failing to stand up for Scottish (and Cornish) fishermen decide to sacrifice a better trade deal for London’s financial services sector to help Scottish fishermen? Let’s get real – there will probably be no change for fishing unless there is no trade deal and that under current rules could lead to a 15 per cent tariff on fish exports to the EU – heads they lose, tails they lose. An independent Scotland would almost certainly stand up for fishermen’s rights better than Westminster but an independent Scotland, in or out of the EU is not on the ballot paper – taking every power the EU has and transferring them to the Tory Westminster Government is and I am not ok with that.

You could be forgiven for thinking that Westminster political elite thinks we now live in a post-truth political environment and that their handling of the last two referendums in particular have amounted to as much an assault on democracy as an attack on our intelligence. Maybe we need every debate to have an American-style fact checker interrupting and challenging, maybe every newspaper should carry a fact checker summary of every article during a campaign. Maybe people are happy to live in a political environment where the Leave campaign having been caught lying thinks the best strategy is to double down on that lie and hope no one calls them out on it, but not on my watch.

You might also like: Scotland would be hit hardest with Brexit vote | A forced Brexit changes Scotland’s constitutional debate