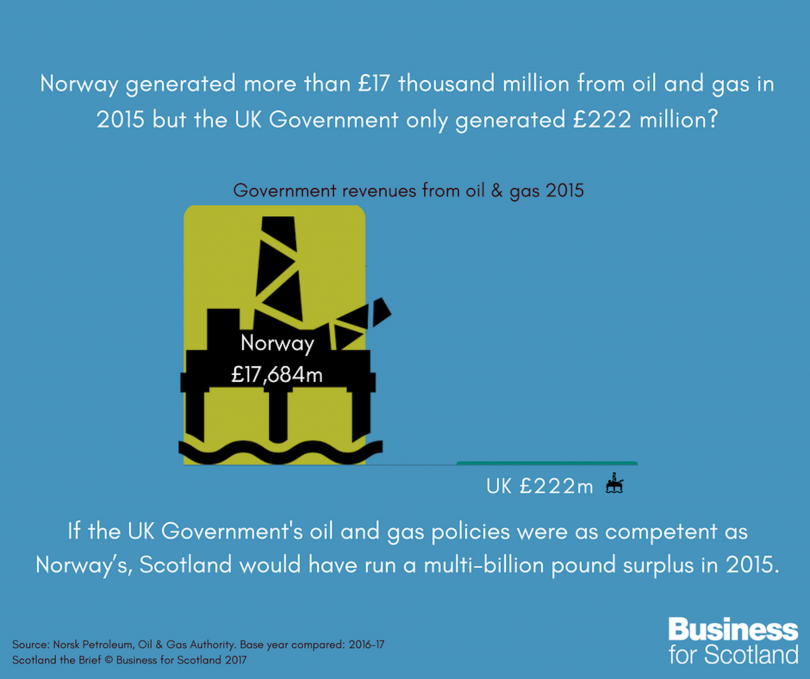 There is no getting away from it, the economy is going to be far more important in the next Scottish independence referendum than it was in 2014. This is partly because the Tories’ hard Brexit doesn’t just undermine, but completely destroys the economic case for the Union – a fact that will hit home as inflation rises and the Brexit negotiations start to go south for the Empire 2.0 team. Partly also because the only real weapon left to the Unionist campaign is to talk Scotland’s economy down by referring to the indicative financial deficit in the GERS reports. We can invest in renewables, no you can’t Scotland has a deficit, we can build a fairer nation, what with a £15bn deficit… you get the gist.

The Unionist mantra is that the fall in oil price has caused Scotland to have a greater deficit than the UK, and this makes sense until you start to realise that oil revenues didn’t fall by the same amount everywhere else in the world. It’s true the oil price slumped by around 55 per cent but Business for Scotland noticed UK Government revenues fell by 99 per cent, even though oil production rose by around 16 per cent during the same period. It doesn’t take a genius to figure out that something other than the price of oil, is impacting Scotland’s national accounts.

Our research published this week poses the question: If being part of the UK is such an advantage how come Norway, a comparable oil-producing nation, only saw a fall in revenues of only about 40 per cent when ours fell by 99 per cent? And more to the point how come small, and independent Norway’s revenues are 411 times larger than the UK’s? Norway generated £17.684 billion from oil and gas in 2015 but the UK Government only generated £222 million in its last published tax year.

The oil sector and their representative bodies make overreaching claims about the difference in one part of the north sea versus another and will claim that tax cuts were necessary at this point. However, a £17bn revenue gap cannot be justified without admitting to Westminster’s historical and significant generational economic mismanagement of Scotland’s oil sector.

Last year at The Times CEO summit George Osborne explained why the UK is not as rich as Norway when he said: “Four million people live in Norway, 65 million people live in this country, and they have the same amount of oil as us”. David Cameron made the same joke on the Andrew Marr Show and the fact that both of them used a 4m figure for Norway when it actually has a population of 5.258m (similar to Scotland), would suggest that is a joke they have shared between themselves and probably shouldn’t have made public.

So the bigger fall in Scotland’s revenues came not from the oil price but the tax breaks that the UK Government offered the industry. Of course, industry groups and the oil companies they represent will welcome such tax breaks and claim they are necessary, but when I looked deeper into the numbers it seems the UK has led the way in carving taxation costs out of its oil industry. 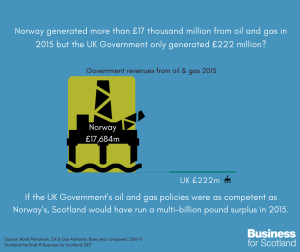 Note: The UK’s figure for 2015 has been updated following the latest release of the UK Government’s revenues from the oil and gas industry.

Mass job losses across the UK oil and gas sector coincided with these tax cuts and the SNP should ask the Westminster Government to make clear if it made any attempt to link these corporate tax breaks to protecting ordinary working people’s jobs in the sector. It does appear that Westminster policy is to protect corporations and their shareholder dividends, while not protecting people’s jobs, Scotland’s economy or it’s Government revenues. Aberdeen is clearly the region most directly affected by the oil price drop and when the region asked for help they made the case for £2.9 billion in economic support. In 2016, David Cameron visited the city and announced that Westminster would only offer £125 million. It was David Cameron who said that Scotland needed to rely upon the broad shoulders and deep pockets of the UK to maximise revenues from oil and gas — but I guess the broader the shoulders, the bigger the shrug?

So the next time you hear a Unionist saying that the GERS accounts show a deficit and that means Scotland can’t afford to be an independent country remember that Westminster runs Scotland’s economy. It is Westminster incompetence right from the outset in terms of resource governance that generated £17.8bn less oil and gas revenue in the last accounting year than Norway. So if Scotland had Norway’s oil revenues it would have run a multibillion-pound surplus in the last financial year.