Business for Scotland welcomes yesterday’s vote in Holyrood to seek a Scottish referendum on independence.

Following the knife edge 2014 vote, we predicted that all of the promises of the No campaign would be broken and we warned that Scotland could be dragged out of the EU against its will; that is why we did not stop campaigning for independence.

Our membership of SMEs and senior managers are steadfast in our shared belief that independence will set Scotland on a more inclusive, greener, confident, equal and economically successful path.

Access to the single market is vital to Scottish businesses, and Scotland’s economic well-being.  Westminster has no plan to lessen the damage of a hard Brexit on Scotland. With the formal process of Article 50 now triggered, so with it should come a fresh vote on Scotland’s inclusive, international, civic self governance movement.

A billion barrels of oil discovered off Shetland coast

The “largest undeveloped discovery” of oil located 60 miles west of Shetland has been discovered by Hurricane Energy.

“We believe that the GLA is a single hydrocarbon accumulation, making it the largest undeveloped discovery on the UK Continental Shelf.”

“What we have witnessed is a drastic drop in oil revenues to the Scottish Government and the UK Government and an incredible reduction in the number of employees in the North Sea.

“What I do not understand is the fact that Holyrood, the Scottish Government does not have under its control the determination and powers entrusted to it to drive forward developments like this.

“As long as Westminster is in control of energy I would be a bit reserved about being jubilant about this discovery. What we have is a sizeable asset that basically belongs to Scotland, lying in Scottish waters.”

Russell said there would likely be a plea from the OGA, Oil and Gas UK and the company that there should be tax incentives to encourage the investment and commented “My view is get your act together,” said Russell. “The oil companies are the richest companies in the world worth billions of dollars. That should be ploughed back into these developments – the time for handouts has gone.

“We want to see in Scotland the maximisation of these discoveries on the Scottish economy.”

Business for Scotland research asks Why is Norway still getting so much tax from oil?

If being part of the UK is such an advantage how can Norway, a comparable oil producing nation, only see a fall in revenues of only about 40 per cent when ours fell by 99 per cent? And more to the point how can small and independent Norway’s revenues be 411 times larger than the UK’s?

Norway generated £17.684 billion from oil and gas in 2015 but the UK Government only generated £43 million in its last published tax year.

The bigger fall in Scotland’s revenues came not from the oil price but the tax breaks that the UK Government offered the industry. Of course, industry groups and the oil companies they represent will welcome such tax breaks and claim they are necessary, but when I looked deeper into the numbers it seems the UK has led the way in carving taxation costs out of its oil industry. 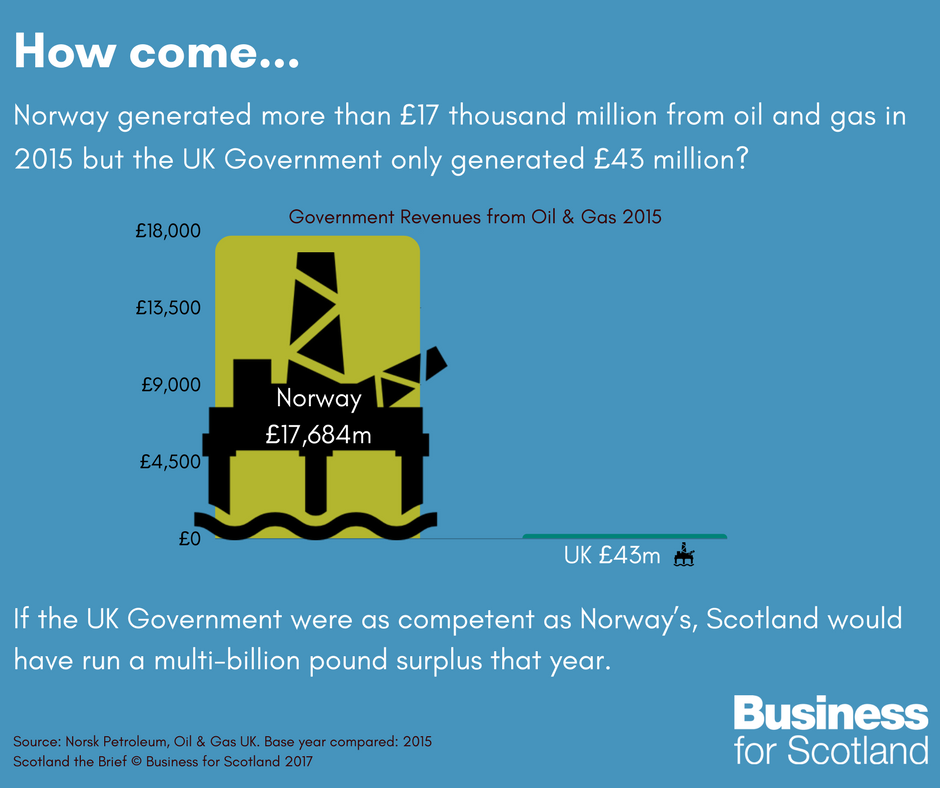 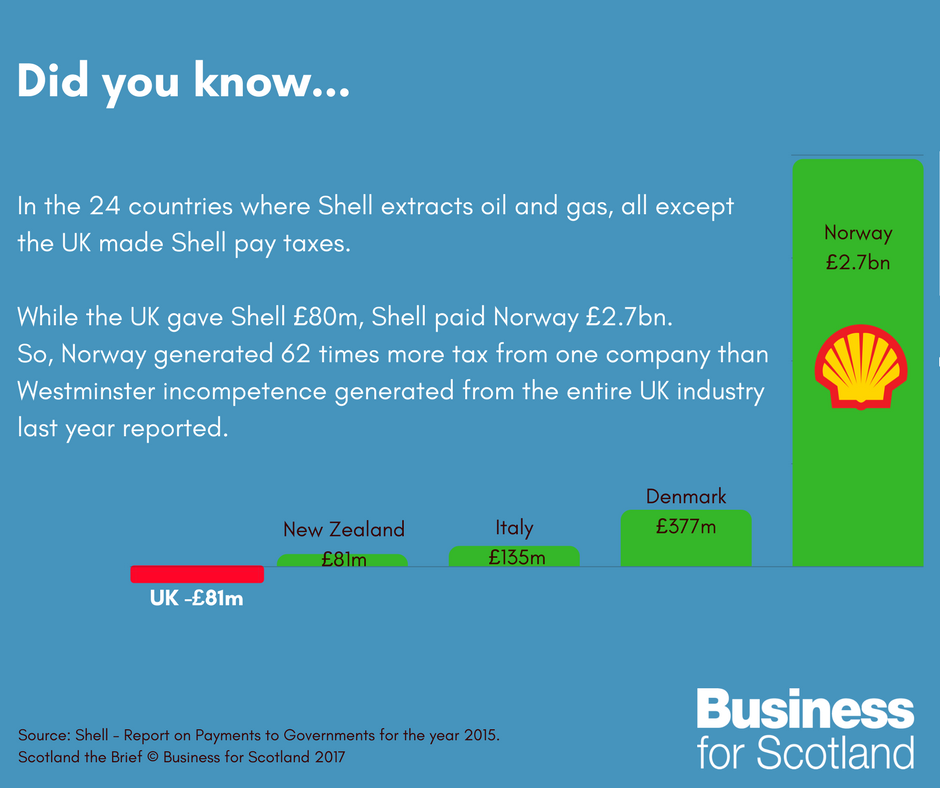 A new food and drink strategy Ambition 2030 has been supported by the Scottish Government, enterprise agencies and the food and drink industry for a new £10m funding package.

The strategy will target key markets, boost innovation, focus on skills, and support local producers – with ambitious plans to double the value of the industry to £30 billion by 2030.

“As an industry, we are hugely ambitious for the future. There are uncertainties ahead, but we have a world class industry and growing markets at home and abroad. ‘Ambition 2030’ will drive a new era of growth in our sector for the benefit of Scotland’s economy and communities.

“The secret of success over the last decade has been a spirit of partnership between the industry, government and its agencies. This funding announcement demonstrates our collective commitment to deepen that partnership and take our work to a new level.”

In the same week the The National Farmers Union (NFU), the Food and Drink Federation (FDF) and the British Retail Consortium (BRC) have urged ministers to ensure higher tariffs were not imposed on imported and exported produce. Saying that both industry and consumers would suffer from the consequences of no trade deal if tariffs and customs checks were imposed after Brexit.