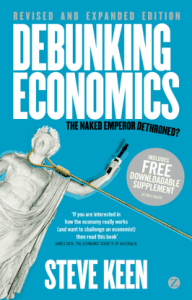 Australian Professor Steve Keen, one of the worlds leading economics experts, Revere Prize winning economist and author of seminal economic text Debunking Economics, said in an interview with www.everyinvestor.co.uk that the mainstream political parties approach to austerity and deficit management was naive. He described the austerity-heavy Conservative and Lib Dem approach and the austerity-lite version from Labour as naive and based on a Kindergarten level of understanding of economics. Professor Keen, credited with being one of the very few economists to predict the recent financial meltdown, also claimed that failing to invest in growth wouldn’t generate a sustainable recovery due to the problem of high levels of private debt – public debt being more a symptom than a cause of economic problems.

During the video interview Professor Keen explains in simple terms how cutting public sector spending to balance the books actually harms growth and takes money out of peoples’ bank accounts. At the end of the interview he is asked if there is any mainstream political party that has a more sensible economic approach, and he states that the only ones who are close to a sensible economic policy are the Greens and the SNP. His rational is that the larger Westminster focussed parties are overly focussed on a banking sector solution to growth, and underestimating the vital impact of public sector investment into the economy that would enhance growth by creating jobs and new revenues.

The video interview is a must watch for anyone who want to understand how the austerity measures preferred by the Westminster parties in this General Election are not working.

This adds to comments made by Nobel Prize winning economist Paul Krugman, who last week coined the phrase ‘the austerity delusion’. He stated the case for cuts was a lie and asked why do people still believe it? Krugman said Britons don’t seem to realise the extent to which their economic debate has diverged from the rest of the western world – the extent to which the UK seems stuck on obsessions that have been mainly laughed out of the discourse elsewhere.

The trickle of voices that spoke out against the irresponsibility of austerity are now becoming a flood, with leading economic voices now adding their weight to a cacophony of common sense. In the last few weeks both Business for Scotland and the leading Scottish economic think tank N-56 have called for an end to austerity to create economic growth. On Business for Scotland, the National and The Sun I wrote that “The goal of Full Fiscal Responsibility is to find the right balance between economic growth, social protection and deficit reduction. In contrast, Westminster’s ill-considered austerity consensus represents full financial irresponsibility.”