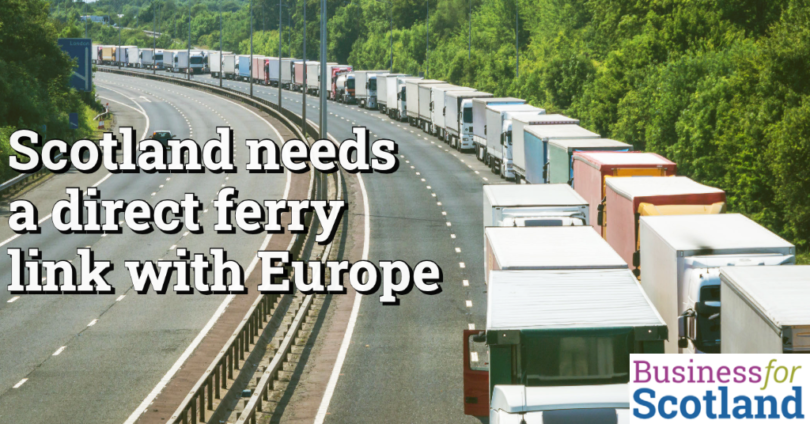 Images of lorries backed up for 23 miles at Dover over the last few days have made news bulletins all over Europe, with drivers forced to stay in their cabs without access to toilets or meals. Many Scots were among those stuck in the chaos – because Dover is currently the main route for freight between Europe and Scotland.

Graham Eardley, managing director of Eardley International, based in Lockerbie, told the Financial Times this week that each stranded lorry was costing £800 a day and that the UK government was “failing to learn the lessons” from previous blockages. He said EU and UK subcontractors were refusing work that risked leaving them stuck in Kent.

Brexit checks and software glitches combined with P&O issues and holiday traffic to cause gridlock in the busy area – but, although more EU goods are imported into the UK than exported, there are no queues at Calais. Brexit import checks have been suspended until July. However, the UK Government is exploring the possibility of delaying full import controls for a fourth time, after warnings that it could break supply chains.

Most European goods, from Bosch dishwashers and VW cars to Italian wine and Spanish oranges, arrive in England and then make their way to Scotland by lorry, with a large proportion coming through Dover. There are fewer loads going the other way.

Scots would welcome reinstatement of the Rosyth-Zeebrugge ferry

A ferry from Rosyth to Zeebrugge would be a greener option, with ocean freight emitting about 25 times less CO2. It would also help ensure more security for Scottish supply chains if import controls create chaos in the other direction later this year.

Last summer, we saw that supply chains break at the ends, which meant Scotland, especially the Highlands and Islands where many supermarkets had empty shelves. With global food prices rising and uncertainty over the situation in Ukraine, this could be worse next time.

It has been difficult to make the Rosyth route competitive for freight traffic in the past, when it was much cheaper and easier to go through Dover, but Brexit is changing the maths. One issue is that, when driving, hauliers can pick up and drop off loads for English customers on the way down south, decreasing the chance of traveling one way with an empty lorry. An operator working at both ends of the ferry route could offer more unaccompanied freight – which Ireland has done.

Ireland has been able to reconfigure its freight traffic since Brexit – but the Scottish Government lacks the levers of an independent country. Currently, the UK Border Force would be responsible for enforcing checks, for example. Dunfermline MP Douglas Chapman has raised the issue of support for Scotland’s maritime industry in Westminster – but the UK Government has voiced no interest in supporting this.

There have been rumours the Rosyth ferry may resume this summer – but nothing has been announced officially  – and the north of England is also keen to secure the link. Rosyth has also been proposed as part of a green freeport by Forth Ports.

For an independent Scotland back in the EU, a ferry route from a Scottish port will be key for taking advantage of access to the single market.

Scottish businesses need independence in Europe to rebuild their trade with European markets. It is no surprise that new HMRC figures show a third of firms exporting from the UK to the EU has simply vanished from the figures – that is likely to be at least replicated across Scotland. Some businesses have gone to the wall as a result.

On social media, Lochfyne Seafarms Ltd reported: “We stopped exporting to the EU in April 2021 due to Brexit associated costs, our main market that we started the business in 2012 selling to, Now lost 60% of our turnover, words fail me when people don’t get it.”

Dave Noble, a fishmonger from Galashiels also commented: “Our own export documentation costs for this last year were circa £60k, some charges have gone up this month by 50-100%. Pre Jan 21 we had no documentation charges, and could get fish to customers within 24 hours of landing. It takes 4 days now.”

Kenneth Watt of UK White Goods, Kilmarnock replied: “Tell me about it, we can’t even send stuff to Ireland due to the massive increase in transport costs and the cost of the paperwork.”

“Duchess AJ” responded: “My husbands’ business is finished. It was just a small business but paid the bills. Most of his customers were in Europe and didn’t want to pay the customs. He’s now filing for bankruptcy and will have to find a job once his depression lifts. It’s real and Brexit has ruined people.”

Delaying Brexit import controls will also mean that Scottish businesses can be undercut by international businesses which can export freely to the UK from Europe. James Withers, chief executive of Scotland Food and Drink, told the FT that: “There is a logic given the ripples in the supply chain created by the Ukraine crisis, but there’s no doubt this will stick in the throat of a lot of exporters who are now 15 months into navigating a tsunami of paperwork that our EU competitors are not facing.”

Scottish Government intervention may be needed

The situation is likely to get worse when post-Brexit import controls are finally introduced. The impact on supply chains could be similar to what we saw last summer, when strict rules on cabotage stopped EU drivers coming to the UK. (The rules were relaxed later).

But this is likely to need Scottish Government support. Hauliers try to avoid driving lorries around empty. Scottish hauliers bringing loads through England have the possibility of making the best use of available space – dropping off and picking up loads on the way down. The Rosyth- Zeebrugge journey takes 17 hours and that increases the cost.

There is a competitive international market for commercial freight ferries and for Rosyth to be successful while Scotland is devolved will take Government action – and that could be costly.

An independent Scotland back in the EU will offer a strong commercial alternative to the chaos of post-Brexit Dover. English hauliers could clear the paperwork, phytosanitary checks and so on in Scotland and importers of EU goods would be able to move freight without checks.