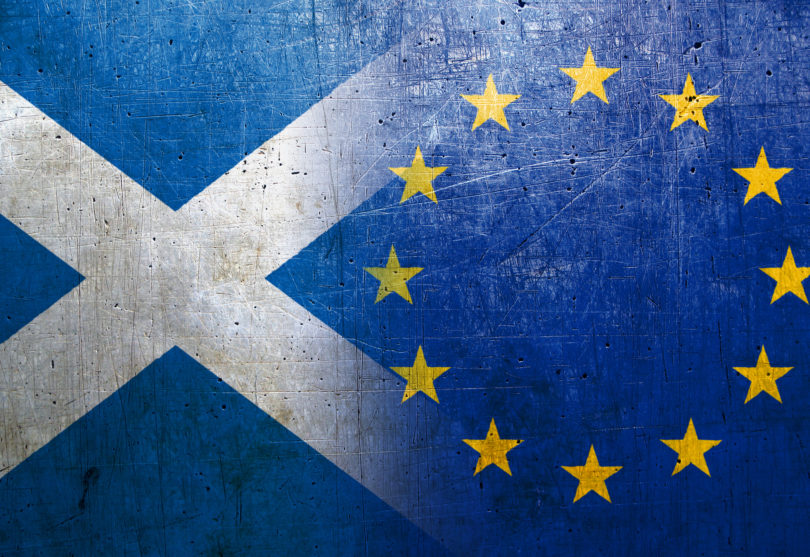 As new figures show the UK’s exports have slumped far below those of both the Eurozone and the rest of the world, some of Scotland’s best-known businesspeople say Brexit is unfolding as a slow-motion  “disaster”, hampering their recovery and blighting their prospects for growth.

Scottish food and farming businesses have to compete with richer rivals in the south of England for the tiny pool of seasonal workers that is available. Games companies may move out of Dundee because they now have to pay a huge private health insurance packages for EU staff.  Professions like Scots law don’t pay trainees the £26,000 needed to meet the Home Office bar so their pool of talent has shrunk.

The struggle to recruit skilled staff is affecting everything from video game developers to shortbread makers. Before Brexit, Scotland’s vibrant tech sector was able to draw on a wide pool of talent from across the EU. Staff could come and go without any red tape between offices in Dundee or Amsterdam. Now it is much more difficult to bring in EU nationals and there are many fewer here already. In the past two years, an estimated 200,000 EU nationals have left Britain.

Meanwhile, the UK Government is exploring the possibility of delaying full import controls for a fourth time, after warnings that it could break supply chains. James Withers, chief executive of Scotland Food and Drink, told the FT that  any decision to delay would anger many exporters. He said:

“There is a logic given the ripples in the supply chain created by the Ukraine crisis, but there’s no doubt this will stick in the throat of a lot of exporters who are now 15 months into navigating a tsunami of paperwork that our EU competitors are not facing.”

Walker’s Shortbread is one of Scotland’s biggest food exporters and Managing Director Nicky Walker, great-grandson of Joseph Walker who founded the company 124 years ago, told Business Bulletin last week that the inability to find staff had caused a major problem for the company.

Around 50% of Walker’s iconic tartan-boxed products, produced in Aberlour and Elgin, are exported to 120 countries. They hold three Queen’s Awards for Export Achievement and a Royal Warrant from the Queen. “It has been a nightmare and the thing that affected us most on the announcement of Brexit was the downturn in the availability of the traditional migrant workforce,” he said. The business usually recruit seasonal staff from Europe around May, taking on 500 as they build towards Christmas exports.

“Since the announcement of Brexit, it appears there have been no foreign nationals coming across in any great numbers and I am sure the berry pickers and the potato guys are all feeling the same thing. Last year we were about 350 down on the staff numbers of three years ago. It looks as if people just don’t want to come.”

Many of Scotland’s farmers have already said that they plan to plant up to 20% fewer crops because of Brexit. Last year, they suffered the heartbreak of watching crops rot in the fields because they couldn’t get seasonal workers to pick them.

Euan Shand, the Chairman of Duncan Taylor Scotch Whisky Limited, has guided, the Huntly-based independent whisky bottler, to global success since acquiring it 20 years ago as a dormant business. He described Brexit generally as a “total disaster” – though not for his company which made a determined and successful effort to increase exports to the US to make up the gap. Scottish business leaders like him are running at full pelt, just to stand still.

“Scots law is drawing from a shrinking pool of talent. There are no Scottish solicitors firms who pay £26,000 a year to trainees. The Law Society of Scotland recommends £19,500 in the first year.  Even if you complete all of the other hurdles, that is not enough to meet the British Home Office requirements.”

“We have over 300 jobs advertised live on our website right now, and another 300 waiting in the pipeline. It’s crazy, really crazy. Ultimately, there’s only so many people to go around.” Hope said:

Prior to Brexit, around 20% of our placements in the UK came direct from the EU. That number has now dropped to 5%, mainly due to a reluctance among EU nationals to move to a country that is now outside the EU.

Prior to Brexit, hiring an EU employee required minimal paperwork. Now, companies must sponsor each potential employee from the EU, apply for visas, and pay expensive healthcare surcharges (“high four figures, and that’s before family members,” says Hope) which previously existed only at a nominal level. Employers must also prove that they have made a valid attempt to seek out applications from UK citizens.

New figures released last Friday by by world trade monitor the Netherlands Bureau for Economic Policy Analysis, known as the CPB. show UK goods exports have underperformed the rest of the world in what experts said was a sign that Brexit is limiting the country’s trade performance.

Scottish Enterprise figures also show that the picture is worse north of the border. Employment growth is slower in Scotland than UK and a majority of Scottish businesses say they are being hampered by the inability to recruit skilled staff.

The volume of UK goods exports fell 14 percent in the three months to January compared with the same period in 2020, before the pandemic, according to the CPB. This was in stark contrast to the global average of an 8.2 per cent rise over the same period. The data, which incorporates Office for National Statistics data for the UK, also showed that Britain compared poorly with the performance of all advanced countries, where goods exports rose 5 percent.

Separate ONS figures also released this week show business investment in the UK was 8.6 percent below pre-pandemic levels in the first quarter of 2022. The extremely low level is “due to Brexit uncertainty”, according to Samuel Tombs, chief UK economist at consultancy Pantheon Macroeconomics.

Exports were also a hefty 15.7 percent below their level in the final quarter of 2019. Tombs said that UK “exports have consistently underperformed relative to other advanced economies since Q1 2021, suggesting that Brexit is largely to blame”.

The UK economy grew faster than previously estimated in the final quarter of last year, but surging inflation resulted in a fall in households’ real income, shrinking savings and lower growth in spending even before the war in Ukraine led to soaring energy prices.

Even Chancellor Rishi Sunak has accepted Brexit is to blame

It’s quite hard to disentangle the various impacts of the pandemic, but also the change in our trading relationship with the EU… It’s clear that you’re describing a situation that has materialised. I think it was always inevitable that if you changed the exact nature of your trading relationship with the EU, that was going to have an impact on trade flows, but it’s hard, at this moment—until we get through all of this—to disaggregate the various impacts that are going on.

Scottish business leaders have pleaded for more to be done to allow workers to come to Scotland. They also face a mountain of paperwork to export to the EU which rivals don’t face to export to Britain. But the Scottish Government has no powers to affect any of this. Holyrood has no sovereignty within the British state.

The UK Nationality and Border Bill passing through the UK Parliament will likely make the situation even worse, creating an impression that Britain is hostile to imigrants and generally eroding the rights of non-UK citizens.  Although the House of Lords has the right to debate and amend this bill, the Scottish Government does not. Holyrood overwhelmingly rejected this bill and refused its consent.

Scotland’s economy is being battered by Brexit. There is very little that the Scottish Government can do to about this without the levers of independence.