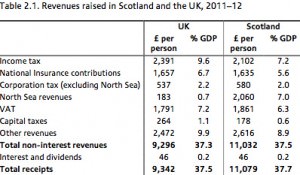 The Institute of Fiscal Studies report on Scotland’s economy released on Monday is a case of ‘bad data in’ equals ‘bad data out’ and bad conclusions.

When I worked at Proctor & Gamble, I spent months analysing sales data and designing optimum promotion pricing and evaluating promotions on brands like Pantene, Wash and Go, Head and Shoulders and Olay.

On one occasion, I spent days building a series of interconnected spreadsheets. I lacked time to source fresh data and instead used some previously compiled by a colleague. The results were so unusual that I knew something had gone wrong. I spent ages looking at my formula but could not find an error. My boss thought the problem might be with the data and when I told him where I had sourced it from he said – “there’s your problem”.  He continued, “When you are doing analysis like this your conclusions are only as good as your data. You put bad data in and you get bad data out so your conclusions are flawed”.

That last little nugget has stayed with me for the rest of my career and it forms the basis of my criticism of the IFS report. The data used is poor, even worse perhaps it’s almost certainly politically motivated. Either way, the assumptions the IFS has used are so flawed their conclusions simply don’t add up.

The report appears to be a deliberate attempt to play down Scotland’s prospects as an independent country. But let’s deal first with the more sensible points made by the IFS.

The authors have to admit that independence could give Scotland an opportunity to create an “optimal tax system” which could lead to some taxes being lower than the UK as a whole. This is evident as devolved Scotland already has been able to choose different spending priorities than the UK as a whole and this would be enhanced post-independence, meaning decision-making would be more focused on local needs. They also admit at present North Sea oil revenues more than make up for higher public spending per head of population in Scotland compared to the rest of the UK. We know that Scots have contributed more in tax per head of population than the UK average every year for the past thirty years.

So they didn’t get everything wrong. Just the parts they know will get them in the media, and here as it happens upon deeper analysis the report falls apart.

The Treasury geographically and politically detached from Scotland.

The IFS has used oil price projections from the UK Office of Budget Responsibility (OBR) set up by Chancellor George Osborne and, although independently governed, like the IFS it is by no means neutral.  It is staffed by London City trained and London centric top down, neo-classical, laissez-fare economists, many of them with similar heritage to the Treasury (HMT).  The OBR and HMT have a reputation for forecasts that suit London’s short-term agenda, that over estimate UK growth to help the Westminster Government and, in particular, underestimate North Sea oil prices.

We learnt recently from former UK Chancellor Denis Healey as to why they did that in the 1970s – to undercut moves towards Scottish independence.  Indeed, they have been criticised for a lack of neutrality in the past by none other than Alistair Darling, Leader of the No Campaign, who said recently: “Right from the start the Tories used the OBR not just as part of the government but as part of the Conservative Party.”  .

The other problem with using OBR data is that it forecasts Scottish oil and gas industry revenues by using what’s known in statistical analysis as an outlier – a statistical anomaly which is markedly different from others in a sample.  Normally when projecting economic data based on market prices you would not use an outlier but a mean figure or one more representative of the whole sample.

In plain language, if you use the lowest projection and ignore far higher ones it leaves you open to the accusation that you are deliberately painting a worse case scenario. But a worse case scenario can only be fairly compared with a best case scenario and ideally at least some of those in between. The IFS have made no attempt to consider higher oil prices in reaching their conclusions.

Hold on a second, so there is almost a $100 per barrel gap between outliers and instead of using a median figure the IFS used the lowest outlier. Plug in the OECD upper outlier figure or for that matter the UK Governments own Department of Environment and Climate Change’s forecast metric or the Scottish Governments conservative projections and you get to a clear picture of Scotland as an economic powerhouse.

The report also suggests that oil revenues will fall sharply but government revenue from oil production will be influenced not just by changes in price but also production and efficiency.

We have dealt with price above so let’s consider production. We are in the midst of a new oil boom. New investment and new discoveries are coming online including the Kraken field in the waters near Shetland, which is estimated to contain nearly 140m new barrels of oil and is mostly owned by Aberdeen-based EnQuest.  The development of this new field is expected to create 20,000 new jobs.

We have also recently found out that the MOD has blocked oil exploration and extraction on Scotland’s Atlantic Coast as oil rigs would potentially interfere with nuclear submarine activities.

Declassified recently secret briefings dating back to 1983 show that Scottish Secretary of State George Younger said that confirmation of finding “exploitable quantities” of oil wouldn’t be available until drilling had taken place, adding that the “MoD are known to be very strongly opposed to any drilling taking place in the Firth of Clyde”.

Efficiency in oil and gas production.

Sir Ian Wood has led the largest and most in-depth independent review of the North Sea oil and gas industry ever, and says “production could increase by four billion barrels over coming years if major changes to the operation of the oil and gas sector are made”. Such changes would put the country in a “stronger position” to extract nearly all of the estimated 24 billion barrels still remaining underneath the North Sea potentially leading to £200bn extra to for Scotland’s Economy.

The IFS report also claims “official population projections suggest that the average age of the Scottish population will increase more rapidly than for the UK as a whole, putting greater upward pressure on many areas of public spending”.

However, the official UK Government population forecasts are based on the continuation of London Centric policy decisions that continue to strip wealth and young talent from Scotland and the North of England.

I agree whole heartedly that this will continue if Scotland votes No but this is another area where the report’s conclusion fails to live up to any presumption of objectivity. 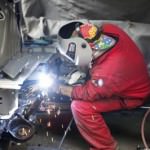 The IFS fails to acknowledge that a central economic rationale for Scottish independence is to bring back the economic levers from London by which we can grow our economy, not least by stopping the drain of talented young people to London, and make our economy more attractive to skilled younger workers (especially from the rest of the UK) who will settle in Scotland and have families.

We can grow our working age population more rapidly and defuse the population age time-bomb, including the associated pensions funding challenge faced by Scotland and most other Western countries. Indeed, these type of challenges are exactly why we need independence now.

In the meantime, despite these challenges, Scotland’s total welfare bill is proportionately less than the UK’s. To isolate benefits or pensions is to miss the broader picture of the welfare safety net. Indeed the IFS report does highlight the fact that Scotland is currently in a stronger economic position than the UK as a whole.

Voting for a No future on September 18th 2014 on the other hand, especially with the prospect of a UK in/out referendum on European Union membership, could see the increasingly xenophobic UKiP agenda pull Scotland out of Europe. This will slow the whole UK economy and, in particular, immigration to the extent we not only have an older population but a massive skills gap as well. Both of which are bad news for business and sustainable economic recovery.

The IFS report is nothing more than another of the plethora of institutionalised London centric economic spin-tank reports aimed at once again pulling the wool over the eyes of Scotland’s people so that they miss the true financial position and potential of their country. We really need to keep asking ourselves why London is so keen to keep Scotland under Westminster control if we are the basket case economy they claim we are.

The IFS has based Scottish oil revenue projections on a low outlier which should be considered limited by any competent and genuinely unbiased forecaster.  It has also projected forward the low population growth and economic growth problems we have as part of the UK as though they are a reason to vote against independence, when in fact these themes are symptoms of the Westminster economic straight jacket that’s holding Scotland back.

The report completely refuses to consider the higher growth in inward investment enjoyed by newly independent countries or, most pertinently this week, the potential impact of an independent Scottish Government controlling economic levers of growth tailored to boosting Scotland’s economic performance even further. The Scottish Government will today publish a report on how the economic levers of independence might be used to boost the economy.

The IFS is at best patronising and ill-informed. At worst, its report is a poorly designed attempt at disparaging Scotland’s prospects for purely political purposes.

10 facts about Scotland’s oil and independence

Defence in an independent Scotland: spend less, get more