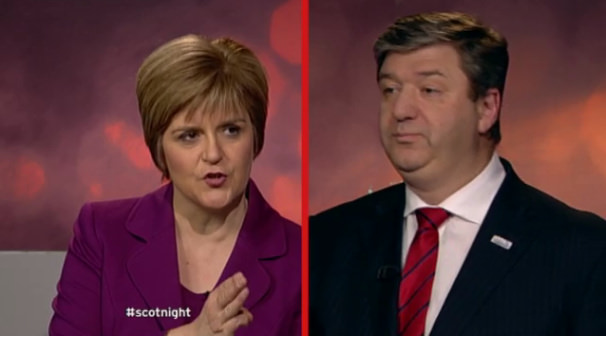 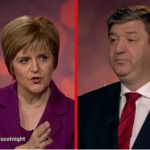 Last night witnessed another devastating defeat for the No campaign in public debate.

The debate itself signified the new momentum behind the Yes Campaign following the publication of the Scottish Government White Paper earlier this week.

Even Unionist commentators like Fraser Nelson of the Spectator called the debate as a walkover for Nicola Sturgeon: “Hate to say it, but better-prepared and terrier-like Nicola Sturgeon won that”, he tweeted.

A number of points were drawn out that signify a change in the campaign as a whole. As Gordon MacIntyre-Kemp from Business for Scotland said on the day of the White Paper launch, “There are now more unanswered questions with a No vote.”

That is why the momentum has shifted in the independence campaign.

A number of examples were mentioned on Scotland Tonight.

With the Tory Government and UKIP squaring up to the European Union, will the UK remain a member of the EU after 2014?

With Westminster politicians threatening to uproot the Barnett formula and cut Scottish funding by £4 billion, how secure are Scottish finances after a No vote?

Can Scotland trust Westminster to deliver any further devolution?

Is 100,000 extra children in poverty a price worth paying for continuing with Westminster’s social and economic policies?

Will Scotland get the government its people vote for in the 2015 general election?

Movement towards a Yes vote

With this shift in the debate it’s no wonder there are more and more examples of a switch to Yes at events across the country.

Business for Scotland recently highlighted three recent local votes where Yes won 66% to 33%. Since then Yes have won student debates in Glasgow, Napier and Heriot Watt. In Perth there was an incredible increase among young voters from 18% to 46% ‘Yes’ after only one hour.

Tony Banks, Chairperson of Balhousie Care Group, said that “If there is a positive case to be made for Scotland remaining in the Union it should be articulated by the UK Prime Minister who, after all, is supposed to represent Scotland as much as the rest of the UK.  Likewise, the First Minister should be offered a UK-wide platform to make his case to Britain.”

The growing uncertainty over these basic questions will put further pressure on the No Campaign, especially in the business community.

Yet the greatest issue for the No Campaign is the lack of vision and ambition for Scotland. Increasing it is the Yes Campaign who have published strategies to make Scotland a more prosperous, competitive and equal society.

As this gulf in ambition grows and the lack of evidence from the No Campaign is scrutinised, Scotland’s trajectory is set towards a ‘Yes’ vote next September.

10 facts about Scotland’s oil and independence

Defence in an independent Scotland: spend less, get more