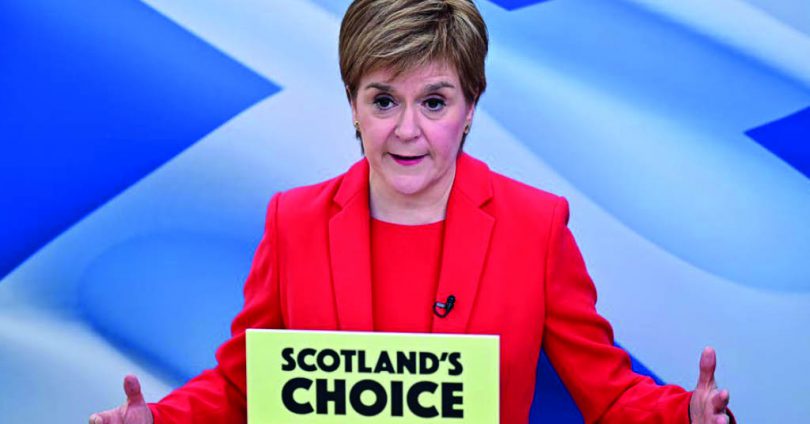 First Minister Nicola Sturgeon has reaffirmed the Scottish government’s commitment to hold a second referendum on Scotland’s independence before the end of 2023. Her programme of government at Holyrood unveiled yesterday gave a clear indication of the arguments which drive her determination to hold the vote and why the timing is so important.

The exact date will be influenced by the health considerations posed by the pandemic but the first half of the current parliamentary term has always been her preferred timetable and she underlined that yesterday.

She delivered her programme for government against a backdrop of radical plans by the Westminster government to suspend the pension triple lock and increase National Insurance payments which make the need for indyref2 stronger and even more urgent.

The Westminster government has announced the suspension of the ‘’triple lock’’ formula which links pension rises to average earnings. It fears a post-pandemic rise in earnings would have meant an 8% rise in pensions. In the 2022-23 financial year the rise will be capped at the consumer inflation rate or 2.5%.

The move tears up a Conservative promise in the party’s 2019 election manifesto to maintain the triple lock formula.

Pensions were a central part of the Better Together argument against independence in the 2014 referendum campaign. The pro-Union side said voting No was the only way to protect pensions.

Boris Johnson’s government has made a mockery of that pledge. Now that it has broken its promise on the triple lock pledge how can we trust it to re-introduce it in 2023-2024?

Westminster’s Conservative government announced a new health and social care tax across the UK to pay for reforms to the care sector and NHS funding in the UK – with no advance discussion with the Scottish government.

It will initially be introduced as a 1.25% rise in National Insurance from April 2022, paid for by both employers and workers, a move which even Boris Johnson admits is a clear breach of a manifesto promise.  It will be established as a new tax on earned income from 2023.

This will be a new tax imposed on Scotland to fix a problem in England. It will be imposed on families already struggling with Westminster cuts without even the pretence of consultation with Scottish elected representatives.

Scotland will benefit to the tune of £1.1bn by 2024-25 through the Barnett formula but Westminster will tell Holyrood how to spend it, which breaches an established convention. The extra money will be ring fenced for health and social care.

Some Scottish MPs have argued that ‘’Scotland is being shafted” by the plan, which they describe as the equivalent of imposing a new Tory poll tax on Scotland that would penalise families by landing them with the bill to fix a crisis in England.

In her programme for government speech the First Minister spelled out the need for the Scottish government to be in full control of the economic recovery from the pandemic.

At this juncture in history, it is essential that we consider the kind of country we want to be, and how best to secure it

The Scottish government sees the recovery as an opportunity to retune the economy and society to better reflect that values of the country rather than the economic philosophy of the Conservatives.

She said yesterday: “At this juncture in history, it is essential that we consider the kind of country we want to be, and how best to secure it.

“As we emerge from the pandemic, choices fall to be made that will shape our economy and society for decades to come. Which parliament – Westminster or Holyrood – should make these choices? And what principles will they be guided by?

“These are questions which cannot be avoided, nor postponed until the die is already cast. So we intend to offer that choice.’’

Boris Johnson and his ministers insist they can block a second referendum for as long as they want. That ignores the overwhelming victory for the SNP in the May Scottish election with an explicit manifesto commitment to holding indyref2 in the current parliamentary term.

Opponents pointed to the fact the SNP had narrowly missed a majority in the elections but the party’s recent power sharing agreement with the Scottish Greens has created a pro-independence majority government.

Westminster’s refusal to back Scotland’s democratic right to hold a vote on independence looks increasingly authoritarian and cannot continue for much longer.

5: The need to prepare an updated case for independence

Although Nicola Sturgeon’s opponents claim that her ‘’obsession’’ with independence is diverting her from other priorities, the opposite is true. Before the 2014 referendum voters were presented with  650-page White Paper on the benefits of independence. Work on putting together an updated argument was stalled when the pandemic struck. With a 2023 deadline looming it’s essential that work resumes.