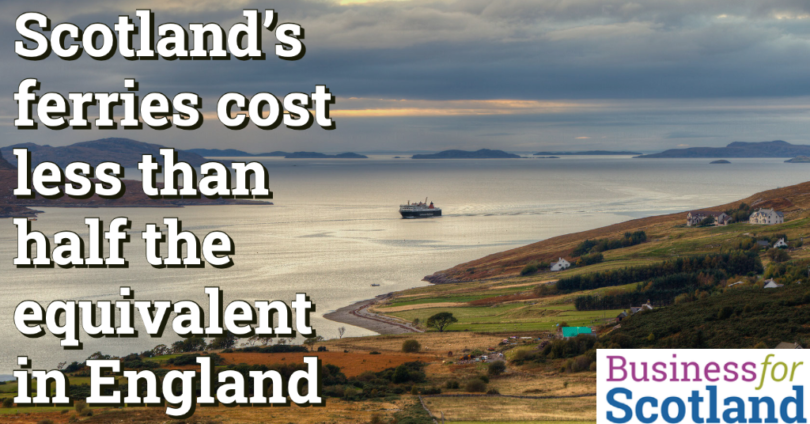 Ferries have featured heavily in the Scottish news diet over the last few months. Headlines have screamed about “Ferrygate” – the story of delays and cost overruns to two new dual-fuel vessels commissioned from Ferguson Marine, and other ferry-related issues. The ferries are indeed five years late and millions over budget and thats not good- however we need to look at this single project in context.

We don’t see the same screaming headlines about UK infrastructure projects such as London tube extension Crossrail – also five years late and £4 billion over budget – that was put down to Covid. There are many other examples – from Hinkley Point to a long list of military projects 36 defence projects worth £166 billion are all late and over budget some are even being scrapped.  Who could suggest the £120 million spent on the Festival of Brexit or the hideously expensive UK Gov Track and Trace at £37bn was money well spent. HS2 tracking £12o billion cost versus an origin budget of less than half of that and it won’t even reach Scotland.

But clearly the most obvious comparison is the supposedly Brexit busting ferries ordered by the UK Government and then canceled costing £50 million – that’s right the UK Gov wasted £50 million on ferries that will never be built – thats context.

A look at the one-sided way Scotland’s ferry services are presented in the Unionist media reveals it as little more than a propaganda effort, which doesn’t deal with the real issues behind the hyperbolic headlines.

Investment in Ferguson Marine is bringing it up to date

Headlines like “ ‘Stink of corruption’ growing over SNP ferry disaster” have abounded. But if you dig into the detail, there is no allegation public money has been spent anywhere other than on the yard. A video on the now state-backed company’’s website shows a timelapse of the formerly down-at-heel, dilapidated yard being turned into a high-tech facility, which will now be better able to compete for work against other state-supported shipyards across the world. If the ferry contract had not gone there, and the yard been allowed to fold, Scottish ferries would have to be built in another country. That result would also, no doubt, have called forth headline howls of rage.

The pandemic and resulting supply chain shocks are certainly responsible for part of the delay and cost over-run of the two ships. – but the yard was also not equipped to move from building standard roll-on roll-off ferries to the more high-tech, dual-fuel ones that the transition to net-zero now requires. These can work on either marine diesel oil or liquefied natural gas (LNG), which reduces carbon dioxide, sulphur and nitrous oxide emissions. Transitioning to this type of ferry meant using tools and skills Ferguson Marine didn’t have and which market forces would not have supported them to develop. This is a rapidly developing area of expertise and innovation where Scotland will now be able to compete.

Criticism has also been aimed at ferries operated by state-owned company CalMac. The sort of ferry issues that affect it are the same as those affecting Northlink services to the Northern Isles, delivered by Serco, but those are not highlighted in the Unionist media. This week’s Shetland Times front-page story is a tale of woe over cost, lack of capacity and lack of places to sleep on the Serco overnight car ferry from Lerwick to Aberdeen – but none of that was picked up by Scotland’s Unionist media.

In comparison, a lunchtime bulletin on BBC Scotland this week featured a CalMac proposal to make tickets non-changeable, which is causing anger on the island. The ferry journey to the Isle of Wight from Southampton is about the same distance as Oban to Mull – a flexible return ticket for the former costs more than £100 while to Mull, a fully flexible return with car is currently just £37.

The Times and Sunday Times have run a series of front pages attacking the Scottish Government over ferries. Commentator Alex Massie accused it of a “disgraceful betrayal” of island communities. Little notice has been taken of ferry successes – such as the steady increase in the capacity of Scotland’s ferry fleet to meet rising demand, caused by the more vibrant economies of the islands. This week a new ferry MV Loch Frisa started on the ferry route to Mull. Two new ferries have been commissioned for Islay and Jura – although they will built in Turkey.

The massive success of RET has caused its own problems

The policy of road equivalent tariff is supposed to mean ferries cost no more than a road journey of the same length. Due to petrol price increases, they now cost substantially less. The policy began in 2008 for just the Western Isles, Coll and Tiree. It was rolled out to several more frequent and high volume routes, particularly Largs-Cumbrae, Wemyss Bay-Rothesay, Oban- Craignure and Mallaig-Armadale in 2015,  and since then its success has created new issues, according to a Scottish Tramsport evaluation.

RET has massively increased car traffic on these routes and the policy now costs more than £25 million a year to the Scottish Government in subsidy – that is more than £100 million every four years.  An increase in cars on the roads boosts some forms of tourism but discourages others, such as cycle tourism. It also reduces the numbers using taxis on the islands. Public transport numbers are also falling on the isles, which in turn increases their need for subsidy.

RET encourages more motor-homes, blocking single-track island roads, day-trippers bring their cars and port towns on the mainland are increasingly clogged with traffic. RET is also increasing the wear and tear on ferry infrastructure and swamping capacity, making it harder for islanders to book travel at short notice and to bring goods on and off the islands.

The massive success of this policy – which was intended to increase tourism – has brought problems of its own. Along with the need to reduce car transport to meet net-zero targets, this may be a push factor to come up with other ideas – such as offering RET only to islanders and blue badge holders and putting park and ride car parks outside port towns to encourage more visitors to leave their cars on the mainland. Subsidising electric bike rentals instead of car transport, for example, would be a greener option.

Many infrastructure projects face delays and cost overruns, particularly in recent years, due to the pandemic and the supply chain shocks that engendered. Ferguson Marine faced additional issues to do with its dilapidated state, its lack of appropriately skilled workers and lack of the cutting-edge software and tools it needed to move into the next phase of shipbuilding. Investing in the yard means merchant shipbuilding on the Clyde now has a future. The company is, for example, currently recruiting 15 apprentices – the application process closes Friday, June 10.

Connecting Scotland’s islands with the mainland is a complex challenge, the revamped and publicly owned Ferguson Marine Yard will in future be more able to play a role in meeting that challenge due to Government intervention and investment.

How much has RET cost the Scottish Government? Transport Scotland