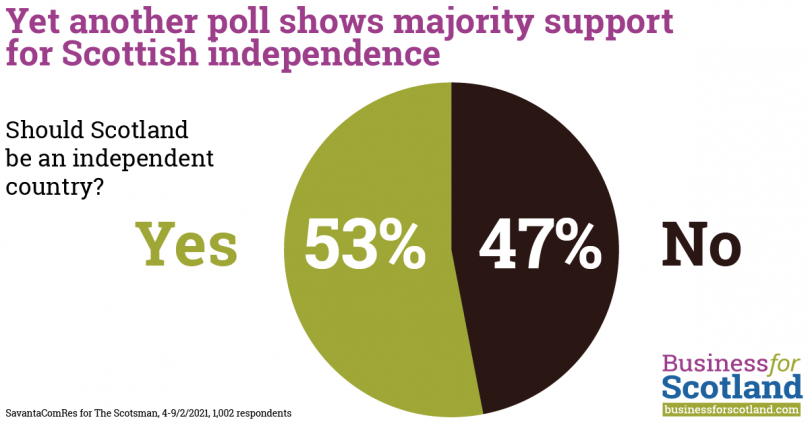 THE 21st opinion poll in a row to show the majority of Scots support independence was published today. Conducted during a turbulent time for the SNP this month the poll shows 53% of those expressing an opinion backed independence.

The poll by Savanta ComRes was carried out between February 4 and 9. It shows that independence support is resilient to internal divisions within the SNP.

The party is still on course to win an overwhelming majority in the Holyrood elections in May, when First Minister Nicola Sturgeon has said the party will include an explicit commitment to holding a legal second independence referendum in its manifesto. 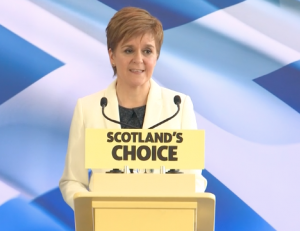 The latest poll does show 10% have still to make their minds up, emphasising the importance of campaigning and targeting soft no voters.

Meanwhile the  disastrous effects of Brexit on Scotland look poised to become even worse, which may well increase uncertainty among voters.

A strong economic case with an emphasis on wellbeing might convince those still undecided.

New Brexit  rules on imports come into effect on April 1 and Scotland’s food and drink industry is warning that the red tape and border problems which have pushed some industries to the brink will deepen.

Since the beginning of the year, when Boris Johnson’s last minute ‘’trade deal’’ with Europe kicked in, the impact on Scotland has been ‘’horrendous’’, according to James Withers, of trade body Scotland Food and Drink. He says the seafood sector alone was losing “about a million pounds a day” and warns: “There’s no sign of any improvement soon. In fact [there are] many signs things could get worse.”

Those checks could also make things slow, more expensive and a lot more complex for EU businesses who need to sell products into businesses here. That’s a big issue for supermarkets

Although the EU insisted on the immediate introduction of controls on exports on Hogmanay the UK government opted to wait until April 1 to introduce similar checks on imports. Mr Withers says: “Those checks, when they’re put in place, could also make things slow, more expensive and a lot more complex for EU businesses who need to sell products into businesses here.

Louise Stamper, managing director of Charles Stamper Fruit and Veg in Edinburgh which sources much of its produce from Spain and the Netherlands, has warned that the new rules will push up prices for the consumer. “It’s going to just become very expensive to go out for a meal,’’ she told the BBC.

Ms Stamper says imports are 20% more expensive than they were last winter, a rise which she attributes in part to Brexit-related border disruption.

It can cost more to get the cheese into Europe than it is sold for. In that case there’s no point in exporting to Europe and some cheese makers have stopped

As reported by Business for Scotland earlier this week, Scottish specialist cheese makers are among those hit. Some have been forced by extra costs imposed by Brexit to stop exporting their products to Europe altogether. Roddy Wilde, a consultant with the Scottish Dairy Growth Board, told us that the quantity of exports may be relatively small but the loss of European markets can stifle businesses’ plans to expand.

‘’It can cost more to get the cheese into Europe than it is sold for,’’ Mr Wilde said. ‘’In that case there’s no point in exporting to Europe and some cheese makers have stopped doing so.’’

Wilma Finlay and her husband David, who run an organic dairy farm near Gatehouse of Fleet in Galloway, are among those who have seen hopes of exporting to Europe dashed.

Ms Finlay has said that if Scotland was still in the EU she would now be considering increasing cheese exports to the continent but the additional costs of Brexit have ruled that out. The new costs add up £45 in time and paperwork on every £35 order.

There are fears within the food and drink industry that the new checks and charges on imports from the EU to Britain due to come into effect on April 1 may see recent food shortages in Northern Ireland being replicated elsewhere in the UK.

If the lessons of the first few weeks in trying to get products out of the country are replicated for products coming into the country, we could find a real challenge

Mr Withers  said: “At the moment supply chains are pretty robust. The big supermarkets know what they are doing. But if the lessons of the first few weeks in trying to get products out of the country are replicated for products coming into the country, we could find a real challenge.

Half of British exporters to the EU have faced difficulties with Brexit red tape and border disruption   after a month of the new rules, according to a British Chambers of Commerce (BCC) survey of 470 firms.

Relations between the EU and the UK government are deteriorating. Westminster’s bid to have a two-year transition period in Northern Ireland has been ruled out by the European Commission, which says checks on good entering Northern Ireland from Britain are not being carried out properly.

And a row is deepening over the Britain’s ability to continue selling financial services on the continent. The EU insists that Britain lock itself into EU financial sector regulation to do so. Bank of England governor Andrew Bailey said the City would not accept being “dictated” to by Brussels.

According to the Financial Times, the shift came because Brussels has not recognised the UK exchanges and trading venues as having the same supervisory status as its own, leading to a ban on EU-based financial institutions trading in London.

The new figures show €9.2bn shares a day were traded in Amsterdam in January – a more than fourfold increase – while trading in London fell to €8.6bn. It follows a ban on EU-based financial institutions trading in London following Boris Johnson’s Brexit deal.

A YouGov poll earlier this month found that 62% of Scots think that Brexit has gone badly since the new trading arrangements came into force on 1 January.