That was a question I was asked at an economics debate last year and my answer, “We are the Europeans”, resulted in a tirade about glib answers, but I thought I had nailed it. It seems to me that that throughout the UK (less so in Scotland) there is a notion that the UK is somehow different, a stand alone nation in a sea of globalised trade. The very idea that any country can exist in splendid isolation seems alien to me and reminiscent of the supposed 1880s Times headline “Thick fog in Channel: continent cut off”. Yet the UKIP rallying call for splendid isolation will dominate the political agenda in 2015 and if it gains momentum it will be bad for Scottish business.

Politically the people of Scotland have been spoilt: for the last year or two the political focus of the UK has been on us and that focus has engaged and educated the Scottish electorate like never before.  Although the SNP vs Labour battle in Scotland will be largely fought over the issues on who is best to champion the needs and wants of Scots, the UK electorate will be looking towards Europe.

It would be reasonable to expect that austerity measures would be top of the agenda but the truth is that there is little difference between the big Westminster parties on austerity. Sure the Conservatives are looking to claim Labour will raise the deficit with uncosted policies, but Labour also seem to be keen to show themselves as strong on the economy by denying that they will tax and spend. Normally the parties would look for a unique selling point such as the SNP’s “Stronger for Scotland” but the Westminster parties have no substantial points of difference on key policies. The exception being UKIP, the party that David Cameron really has to beat to win a majority, and that is why the UK General Election arguments will largely focus on the EU.

There is a very strong economic case for Scotland staying in the EU. Scotland exports around £40 billion out-with the UK and 8 out of 10 of Scotland’s largest export markets are EU members. Estimates for how many jobs depend on Scottish exports to the EU range between 300,000 and 350,000 and with one key major export sector, oil and gas, under price pressure right now a strong and open market relationship with Europe is crucial.

Some 40% of foreign direct investment into Scotland comes from EU members’ firms and the ability to access the common market from a Scottish base is a key motivator on non-EU inward investment and job creation. Add to that, vital payments to farmers under the common agricultural policy (CAP) and approximately 177,000 EU citizens are resident in Scotland and we can see how economically and socially we are connected to the EU. The EU citizens figure is important both because Scottish population levels fell for decades due to economic migration, but also as immigrants from the EU improve the economy they are more likely to be of working age and be highly educated. For example: 32% of EU migrants have a degree vastly surpassing the UK average of only 21%. Migrants from within the European Economic Area provide a surplus of 45% more in taxes compared to UK residents. Interestingly migrants from outside the EEA provided a surplus of 13% more in taxes compared to UK residents and are far more likely to be entrepreneurial, start their own businesses or work in family businesses.

For UKIP and their media allies this is an inconvenient truth.

The facts are clear: despite the widespread disillusion with EU bureaucracy and a clear need for reform, the economic benefits of remaining in the EU for both Scotland and the rest of the UK are convincing. That doesn’t necessarily mean that Euro-scepticism in the rest of the UK will lesson during the campaign or indeed that any in / out EU referendum would result in a vote to maintain membership. The problem is that EU membership benefits are complex and economic detail turns people off. Such debates stir up passions that are not responsive to detailed and evidence based arguments. With two boring Prime Ministerial candidates and with only UKIP’s EU stance and the potential SNP annihilation of Scottish Labour making real political news, the metropolitan press is going to make this a referendum on EU membership. 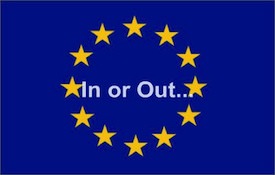 When some major media outlets are clearly anti European and UKIP provide the opportunity to make covering the election more interesting, we have a perfect storm blowing towards an EU exit.

Last year Ipsos-Mori stated that 53% of Scots would vote to stay in the EU and 34% to leave, and Survation found that Scots were 5% less likely to support leaving the EU than the average for the rest of the UK.  An average of the three most recent UK-wide YouGov polls show that the pro EU vote sits on 41% with leaving on 40% with 16% undecided. This is backed up by Ipsos-Mori Research Director Mark Diffley who told me yesterday that: “The situation in the rest of the UK is tighter than people think.” He added: “Instinct tells me that attitudes towards EU membership have not changed in Scotland over the last year or so. Given the distribution of party support it is more likely that Scotland would both vote to maintain EU membership and be more likely to do so than in the rest of the UK.”

Things could change and the Greek situation will be very educational: if the new Greek government is able to negotiate a deal on debt and austerity then people may start to believe that Cameron’s pledge to get a better deal for the UK (especially on immigration) is more realistic. The new and massive quantitative easing program of the European central bank, if managed correctly, could lead to a faster recovery within the Eurozone and make the EU more attractive to UK voters.

I believe that if Labour doesn’t also offer a referendum on EU membership they won’t win and may lose badly, so I predict that regardless of who wins in May we will have an EU referendum. That support for EU membership will rise in Scotland, especially given the SNP Government’s popularity and its full on commitment to EU membership, and that the rest of the UK will, through UKIP’s influence, move towards the exit door but it is too tight to call.

This could create a constitutional crisis, firstly if Scotland votes to stay and the rest of the UK, by virtue of numbers, drags Scotland out of the EU. Clearly such a change to the constitutional make-up of the UK would reopen the Scottish independence question as EU membership was clearly promoted by the No camp part of the UK deal.  The second, but less likely, scenario that could create a constitutional crisis is that the rest of the UK votes marginally to leave the EU and Scottish votes, maybe even in the tens of thousands, keep England in the EU against its will. We will name that the Schadenfreude Scenario in honour of our German friends. 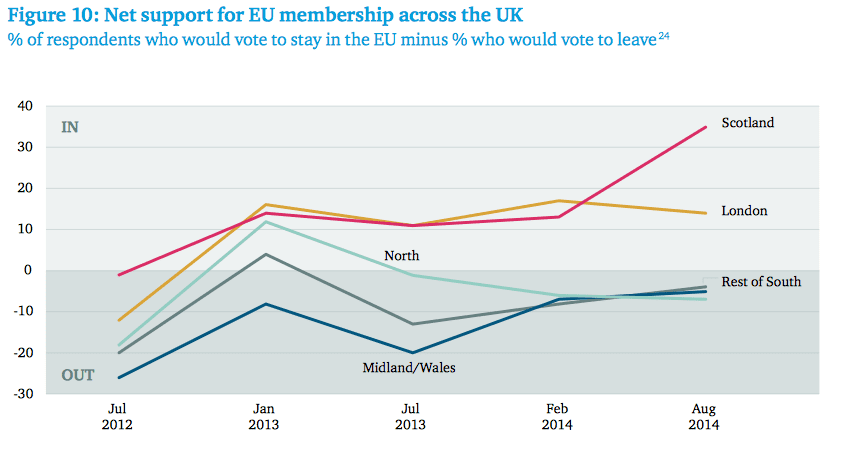 This article was first published in The National on Friday January 30th.